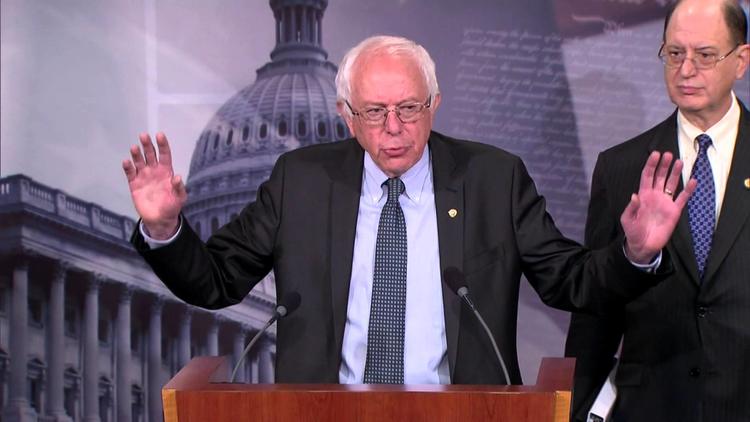 If passed, bill would give Treasury Secretary a year to break up institutions bailed out in financial crisis.

Sen. Bernie Sanders, who is running for president in 2016, will introduce a bill to Congress that would break up “too big to fail” institutions. (Photo: Brookings Institution/flickr/cc)

U.S. Senator Bernie Sanders of Vermont, who in April announced his candidacy for president for the 2016 election, on Wednesday will introduce a bill to break up the country’s biggest banks—just a day after the Senate passed a Republican budget that takes aim at many progressive issues.

Under the proposal, called the Too Big to Fail, Too Big to Exist Act, regulators on the Financial Stability Oversight Council would compile a list of institutions which say they are so large that their collapse could trigger an economic crisis—otherwise known as “too big to fail.”

The Treasury Secretary would then have a year from the bill’s passing to break them up.

“If an institution is too big to fail, it is too big to exist,” Sanders said Tuesday. “No single financial institution should have holdings so extensive that its failure could send the world economy into crisis.”

The firms on that list would also be banned from using customer money to make “risky or speculative activities on the financial market,” Reuters reports.

While the proposal is unlikely to pass, Sanders’ stance on the issue indicates his support of more progressive policies than his fellow Democratic presidential candidate, Hillary Clinton.

Clinton has been criticized for what some see as a friendly relationship with Wall Street, having taken millions of dollars in contributions from financial firms and other big corporations throughout her political career.