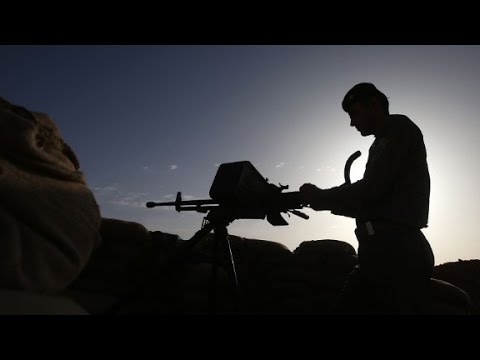 The inside-the-Beltway debate set off by the fall of the Iraqi city of Ramadi to Daesh (ISIS, ISIL) on Sunday is, as usual, Dadaistic in its disconnection from reality. Republican talking points blame Barack Obama for withdrawing US troops from Iraq in 2011, as though Daesh suddenly began in 2012. The GOP figures typically don’t mention that it was George W. Bush who set the end of 2011 as the date for a total US withdrawal from Iraq, because that was all he could get from the Iraqi parliament.

But the whole debate about “who lost Ramadi?” assumes facts not in evidence, i.e. that Ramadi has ever been “pacified” or somehow a United States protectorate, sort of like Guam or Puerto Rico.

The United States has been for the Sunni Arabs of Iraq what the Mongols were to Baghdad in 1258, an alien invading force that came in and turned things upside down.

Here is what I wrote at my blog in August, 2003, based on what I was seeing in the Iraqi press or hearing on shortwave radio in Arabic:

*Huge explosions at the US base at Ramadi west of Baghdad, but no word on casualties as I write. Guerrillas killed one soldier, wounded two others outside the police station at Baquba, northeast of Baghdad.

In November of 2004, Bush launched a massive attack on Falluja, just to Ramadi’s east. It was seen throughout the Sunni regions as a sign that Sunnis were going to be subordinated by the Americans to Shiites and Kurds.

In early 2005, I wondered if the Sunni insurgency could eventually turn into a “Third Baath coup.” By that I meant that the remnants of the Baath Party (socialist, nationalist) allied with Salafi Muslim hardliners were systematically killing members of the new political class being stood up by the Bush administration, and were angling to take back over the country. We now know that former Baath officers set up the so-called “Islamic State” as a means of gaining recruits for their ongoing insurgency, at a time when the Baath Party no longer had any cachet but political Islam seemed a growing trend. The ex-Baath/ Salafi cells of resistance were all along strong in Ramadi.

In summer of 2005 Shiite parliamentarians had the major share in the drafting of the constitution. The US military occupied Ramadi but did not control it. Darren Mortenson reported in 2005:

The Marines say they think there are about 2,000 potential insurgents in Ramadi, led by a hard-core cadre of about 150 full-time fighters from Iraq and other countries who have expertise in weapons, bomb-making and guerrilla tactics. Since they arrived in Ramadi in March, the battalion has lost at least 14 Marines and sailors in combat, mostly roadside bombs that do not give the survivors targets against which to fight back. “I don’t think the Battle of Ramadi can ever be won,” said one company commander, according to the recent article. “I just think the Battle of Ramadi has to be fought every day.”

Some 5000 people in Ramadi came out to demonstrate against the Shiite-Kurdish constitution, which the Sunnis voted down in all their regions. I was interviewed in the run-up to the referendum:

“Juan Cole, an Iraq expert who teaches Middle Eastern history and politics at the University of Michigan, said the U.S. cannot afford a bold military strategy or heavy hand in Ramadi, least of all now with the constitution and two upcoming elections in the balance. . . Cole said Ramadi will be an important place to watch to see if attempts at democracy can survive. “If you cannot get the Arabs of Ramadi to buy into it, you lose Anbar. And if Anbar province is lost to the government, then it means Iraq will be partitioned,” he said, offering little hope that a breakup could be avoided. “If there could be a breakthrough in Ramadi, then maybe there could be a breakthrough in other Sunni cities elsewhere. But I’m not going to hold my breath,” he said. “I think the whole thing is going south.”

People routinely used to call me unduly pessimistic back in the early days of the American occupation of Iraq, as if that whole thing was ever going to work out.

Al-Anbar Province solidly defeated the American-imposed draft constitution in mid-October, 2005. If you have three Sunni-Arab provinces that reject the national constitution, then you don’t have a country, you have a civil war waiting to happen.

Just after the referendum, in late October, Sabrina Tavernise wrote for the NYT:

“Still, more than two years after the American invasion, this city of 400,000 people is just barely within American control. The deputy governor of Anbar was shot to death on Tuesday; the day before, the governor’s car was fired on. There is no police force. A Baghdad cellphone company has refused to put up towers here. American bases are regularly pelted with rockets and mortar shells, and when troops here get out of their vehicles to patrol, they are almost always running. “You can’t just walk down the street for a period of time and not expect to get shot at,” said Maj. Bradford W. Tippett, the operations officer for the Third Battalion.”

Nor did the US do anything for the people of Ramadi. Their state-owned factories and enterprises were driven into bankruptcy by Paul Bremer’s neoliberal policies. Likely half of the men were thrown out of their jobs. At the end of the long American occupation, 23% of Iraqis, some 7 million out of 30 million, were living below the poverty line. All the killing had left behind large numbers of widows, and 4.5 million children and youth who had lost a parent. Many are now resentful young men old enough to hold a kalashnikov.

A poll taken of Iraqis by the British military in late October of 2005 showed:

If 82 percent of Iraqis in general didn’t want US forces in their country late in 2005, probably 100% of the people of Ramadi did not. And no one in Iraq thought that the US military had brought improved security with it.

Through 2006, Iraq fell into Sunni-Shiite civil war. On a random day in that year, I reported “Al-Zaman says that fighting continues between the US military and guerrillas in Ramadi, with 12 dead and 12 wounded on Tuesday.”

After the US military once again conquered Ramadi, an LA Times reporter visited it in 2007:

“No one underestimates the scope of the task, which is evident to anyone who drives through the city. Ramadi resembles a small-scale version of Berlin in 1945. Whole city blocks have been reduced to rubble by airstrikes, improvised explosive devices, rocket-propelled grenades and other munitions. The government center has been leveled, and heavy armored vehicles that rumbled through the streets have ruptured water mains in scores of places.”

During WW II, the US and Britain fire-bombed German and Japanese cities. That Ramadi looked like Berlin after the war is an indictment for an occupying power, not a compliment.

So it completely escapes me why John McCain, Lindsey Graham, John Boehner or Tom Cotton (who helped personally with the berlinization of Iraq) think that if only US troops had remained in country after 2011, the people of Ramadi would have been delirious with joy and avoided throwing in with radical anti-imperialist forces.