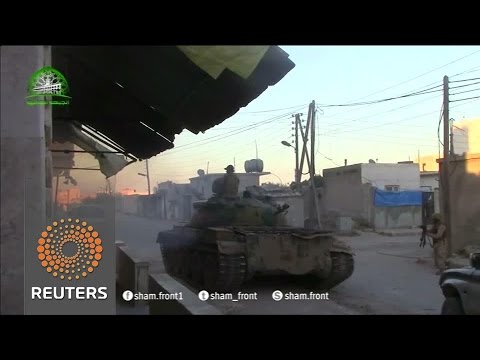 Daesh (ISIL, ISIS), the murderous terrorist organization that has taken over the eastern desert of Syria and the western desert of Iraq, along with perhaps 3 million townspeople, is now making a move on Syria’s largest city, Aleppo. For the past five days, Daesh has been fighting fiercely with other Syrian rebels in the hinterlands of north of Aleppo. During the past two days in particular, Daesh has launched an all-out effort to take the villages northeast of Aleppo. The other rebels, based in Mari there, have been reduced to attempting to defend themselves.

The rebels are complaining that the US and its air coalition have been contacted several times about flying bombing raids against Daesh convoys, but that they have received no response from the US military command.

The opposition organizations in the area include Syrian Revolutionaries, the Free Ones of Syria, the Levant Front, and the “Stand steadfast as you were Commanded” Group A major commander of the Free Ones of Syria until his death last winter had substantial al-Qaeda ties, and while many fighters in northern Syria are moderate Sunnis, they typically are fighting alongside extremists. The Syrian Human Rights Observatory estimates that in the past two days, 45 rebels have died in the fighting, and about 30 Daesh commandos.

On Tuesday morning, the rebels were claiming to have advanced on the Daesh-held village of Suran.

The rebel forces say that the al-Assad regime is bombing them with barrel bombs (just barrels filled with petroleum). This move de facto aids Daesh and hurts the rebels. For the past two years, Daesh and the regime have largely avoiding fighting each other.

One of Daesh’s strategic objectives appears to be to take the area north of Aleppo, stretching to the Turkish border, including the major checkpoint there. This conquest would cut Daesh’s rebel rivals off from resupply via Turkey in that area, allowing Daesh to finish them off. It would thus avoid having to launch a frontal assault on rebel-held villages Mari and Tel Rifat in the northern hinterlands of Aleppo, starving them of key military supplies instead.

On Monday morning Daesh advanced from Suran, which it had taken a couple of days before, toward the villages of Ghazal and Sheikh Rih. But the local rebels fought it off, inflicting human and military casualties, and forced Daesh to halt this attempted expansion for the moment.

The rebels have sent large numbers of reinforcements to the Aleppo hinterland, but they haven’t been able to force Daesh out. They did take back a couple of villages.

The Daily Beast reports that that the al-Izz Front, which had joined the US-backed moderate force, is threatening to withdraw. One of its leaders, Mustafa Sijari, maintains that he was told by the Pentagon to concentrate on fighting Daesh and not to bother the al-Assad regime.

I’ve heard it speculated that the Obama administration thinks it needs Iran’s help to defeat Daesh in Iraq, and therefore doesn’t want to alienate Tehran by attacking Iran’s ally, the al-Assad regime. That is, the Iraq and Syria campaigns against Daesh require different strategic and tactical alliances. In order not to have the one blow back on the other, Washington has decided to leave al-Assad alone until Daesh is defeated. Thus, Sijari’s complaint is perfectly plausible. He is trying to point out, however that you can’t get Syrian Sunni groups to fight Daesh for the US and forbid them to fight al-Assad’s forces, since they would come to be seen as traitors.

Not to mention that the US isn’t intervening to prevent Daesh taking the Aleppo hinterland to the north. In other words, the US Syrian policy is a victim of the US Iraq policy.

Reuters: “Syria rebels move to reverse IS gains in Aleppo”