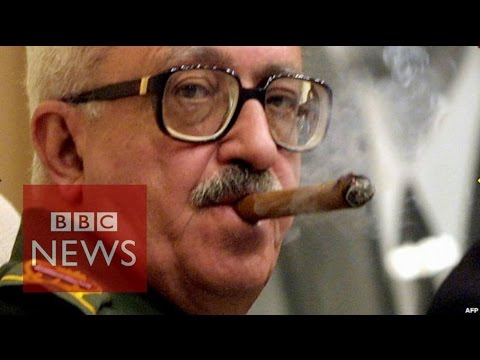 Tariq Aziz, the former deputy prime minister and former foreign minister of Iraq, is dead at 79. He died in prison in the custody of the Shiie-dominated government he tried to forestall.

Aziz was born Mikhael Yuhanna (Michael John) into a Chaldean Catholic family. He gravitated to the Baath Party because of his support for Arab nationalism. (In the twentieth century, religious minorities often supported nationalist or leftist secular parties that downplayed the differences among the nation’s constituencies).

Aziz was not a nice man, and his Baath Party was not a nice party. It erected a nasty one-party state. He joined in the paranoia of his friend Saddam Hussein after the latter’s ascent to power, in which hundreds of Baath Party functionaries were summarily killed on suspicion of insufficent loyalty after Saddam’s 1979 coup.

Aziz supported the wanton invasion of Iran in 1980 that kicked off one of the worst wars of the 20th century outside the world wars– the Iran- Iraq War. He also favored the invasion of little Kuwait in 1990, which led to the Gulf War.

After a Shiite attempt to assassinate him in 1979, he was uninterested in minority rights and as a Christian feared political Islam.

He turned himself in in April, 2003, after the fall of the Saddam regime at the hands of George W. Bush. He was eventually tried and sentenced to 15 year in prison, then life imprisonment, then death, though ever more charges and courts were allowed to pursue further cases against him.

His nemesis, the Da`wa Islamic Party (the Islamic Call or Islamic Mission) had come to power by the time he was tried. Almost the only people who vote for Da`wa are the Shiite Arabs. The Kurds vote for the Kurdish Alliance coalition. The Sunnis voted for various parties, most recently the Iraqiya, before being swallowed by the so-called caliphate.

Aziz’s authoritarian and paranoid one-party state was what began the deformation of modern Iraq, and led in some ways to the current impasse. Iraq needs more parties, not less.

Something like a Labor Party that working people of all religious backgrounds and ethnicities could support is desperately needed in Iraq.