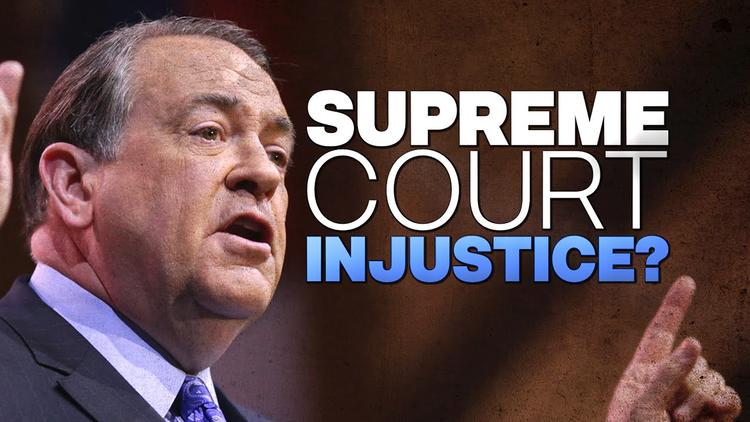 The freak-out by the Republican presidential candidates over the Supreme Court decision on same-sex marriage provokes me to revise and reprise the points below. Rick Santorum and Mike Huckabee have formally pledged: “We will not honor any decision by the Supreme Court which will force us to violate a clear biblical understanding of marriage as solely the union of one man and one woman.” Sen. Ted Cruz also called on Americans to ignore the SCOTUS ruling.

Does that mean the rest of us can repudiate the decision making W. president in 2000, and can refuse to recognize corporations as persons?

In any case, the Bible doesn’t actually say anything at all about homosexuality, since it is a form of identity that only came into being in modernity. (Same-sex intimacy has been there all along, but in most premodern societies it was not a subculture, though medieval male bortherhoods were common and in South Asia there were hijras).

But wackiest of all is the idea that the Bible sees marriage as between one man and one woman. I don’t personally get how you could, like, actually read the Bible and come to that conclusion (see below). Even if you wanted to argue that the New Testament abrogates all the laws in the Hebrew Bible, there isn’t anything in the NT that clearly forbids polygamy, either, and it was sometimes practiced in the early church, including by priests. Josephus makes it clear that polygamy was still practiced among the Jews of Jesus’ time. Any attempt to shoe-horn stray statements in the New Testament about a man and a woman being married into a commandment of monogamy is anachronistic. Likely it was the Roman Empire that established Christian monogamy as a norm over the centuries. The Church was not even allowed to marry people until well after the fall of the Western Roman Empire, since it was an imperial prerogative.

Ancient scripture can be a source of higher values and spiritual strength, but any time you in a literal-minded way impose specific legal behavior because of it, you’re committing anachronism. Since this is the case, fundamentalists are always highly selective, trying to impose parts of the scripture on us but conveniently ignoring the parts even they can’t stomach as modern persons.

1. In Exodus 21:10 it is clearly written of the husband: “If he takes another wife to himself, he shall not diminish the food, clothing, or marital rights of the first wife.” This is the same rule as the Qur’an in Islam, that another wife can only be taken if the two are treated equally.

2. Let’s take Solomon, who maintained 300 concubines or sex slaves. 1 Kings 11:3: “He had seven hundred wives of royal birth and three hundred concubines, and his wives led him astray.” Led him astray! That’s all the Bible minded about this situation? Abducting 300 people and keeping them immured for sex? And the objection is only that they had a lot of diverse religions and interested Solomon in them? (By the way, this is proof that he wasn’t Jewish but just a legendary Canaanite polytheist). I think a settled gay marriage is rather healthier than imprisoning 300 people in your house to have sex with at your whim.

3. Not only does the Bible authorize slavery and human trafficking, but it urges slaves to “submit themselves” to their masters. It should be remembered that masters had sexual rights over their property assuming the slave-woman was not betrothed to another, and so this advice is intended for concubines as well as other slaves. And, the Bible even suggests that slaves quietly accept sadism and cruelty from their masters: 1 Peter 2:18: “Slaves, submit yourselves to your masters with all respect, not only to the good and gentle but also to the cruel.” So a nice gay marriage between two legal equals with no acts of cruelty would be much better than this biblical nightmare.

4. Then there is Abraham, who made a sex slave of his wife’s slave, the Egyptian girl Hagar, and then abandoned her to cruel treatment.

“Now Sarai, Abram’s wife, had borne him no children. But she had an Egyptian slave named Hagar; 2 so she said to Abram, “The Lord has kept me from having children. Go, sleep with my slave; perhaps I can build a family through her.” Abram agreed to what Sarai said. 3 So after Abram had been living in Canaan ten years, Sarai his wife took her Egyptian slave Hagar and gave her to her husband to be his wife. 4 He slept with Hagar, and she conceived. When she knew she was pregnant, she began to despise her mistress. 5 Then Sarai said to Abram, “You are responsible for the wrong I am suffering. I put my slave in your arms, and now that she knows she is pregnant, she despises me. May the Lord judge between you and me.” 6 “Your slave is in your hands,” Abram said. “Do with her whatever you think best.” Then Sarai mistreated Hagar; so she fled from her.

So let’s get this straight. Abraham isn’t said to have married Hagar. Apparently he and Sarah had separate property, because Hagar remains her slave. So he slept with someone else’s slave and got her pregnant. And then when that caused trouble between his wife and her slave, he washed his hands of his property-lover and let his wife mistreat her. As we know from 1 Peter, Hagar was supposed graciously to put up with this, but she was made of fiercer stuff than that, and you really have to root for her in this rather sick family situation.

5. According Mark 12:19, guys, if your brother kicks the bucket, you have to marry your sister-in-law and knock her up. Since the Bible approved of multiple wives, you have to do this even if you’re already married. If you think in-laws are hard to get along with now, try being married to them.

6. So I don’t think this happens very much, but guys, in biblical marriage you might have to cut your wife’s hand off if she defends you too vigorously. That’s right. Say you’re at a bar and this big bald badass with tats starts smashing your face in. And say your wife likes you and wants to stop the guy from giving you a concussion. Say she reaches down and gets him by the balls. So the Bible would reward her for loyalty and bravery and fast thinking, right?

Nope. Now you have to cut off her hand. I mean have to. You’re not allowed to have a moment of weakness and think about how pretty her fingers are. Off with it, to the wrist

GOP, you think I’m making this up, right?

Deuteronomy 25:11-12: “11 If two men are fighting and the wife of one of them comes to rescue her husband from his assailant, and she reaches out and seizes him by his private parts, 12 you shall cut off her hand. Show her no pity.”

I’m not sure exactly what kind of weird marriage Deuteronomy is recommending, where certain actions taken by they wife to keep herself from being turned into a widow are punished by her husband by chopping off her hand.

7. The Bible doesn’t even approve of marriage at all! 1 Corinthians 7:8 “To the unmarried and the widows I say that it is well for them to remain single as I do.” So contrary to the GOP’s notion that the Bible authorizes only a single kind of marriage, of which it approves, actually it much prefers believers to die out in a single generation. Only the weak and unbiblical get married.

So this is the real problem. People like Huckabee and Cruz shouldn’t be married in the first place, much less holding up some imaginary ideal of biblical marriage for everybody. And if all the biblical literalists would just obey 1 Corinthians, the whole problem would be over with in just a generation. Then the rest of us could get some peace and make rational policy on social issues.

And as for getting married biblically, you can do that in all kinds of imaginative ways– take two wives and someone else’s sex slave as Abraham did, or 300 sex slaves as Solomon did (not to mention the 700 wives), or your brother’s widow in addition to your own wife. And remember, if your sex slave runs away because you’re cruel to the person, the Bible (Philemon) says that other people have the duty to return the slave to you, i.e. basically imposes the duty of trafficking slaves back to sadistic sex maniacs who exploit them. But if the owner is nice and a good Christian, he might consider letting the sex slave go. But he doesn’t have to.

The Young Turks: “Huckabee: Supreme Being Overrules The Supreme Court”