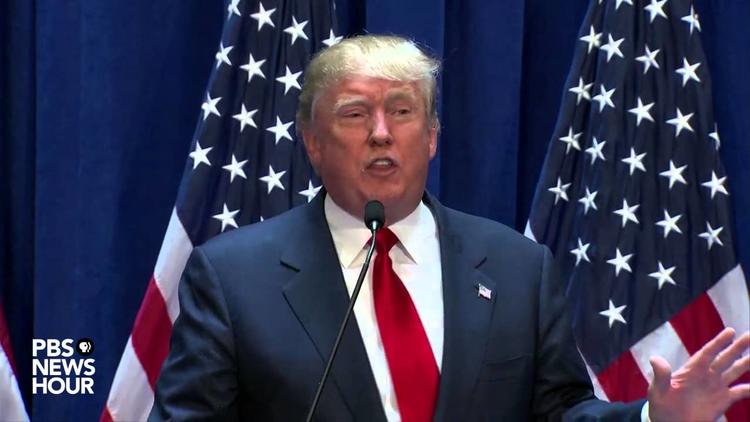 Comedians, bloggers, and pundits are ecstatic about The Donald throwing his toupee in the ring for the Republican nomination. The stories write themselves. But the Republican Party establishment is appalled, because Trump will create an image for the party that will hurt it in the general election. Despite doing well in 2012 at the level of the House of Representatives and the Senate, the Republicans lost the presidency and some seats because of the clownish things some of their prominent figures kept saying, about rape, abortion, and immigration. Statistically speaking, you pretty much have to get 44 percent of the Latino vote to be president. The Angry White Men running for congress make it hard for the Republican standard bearer to pull that off. And the Grand Old Party has a 10% gender gap with the Democrats, for whom many more women vote.

Trump’s maiden speech was a doozy, and will not have made the Latinos happy. As for the women, Trump’s past pronouncements on their issues still stick in the craw.

In his speech, Trump accused Mexico of stealing our jobs, along with China, which has also apparently stolen our money. (Trump doesn’t seem to understand the difference between China holding nearly $1 trillion of US debt– not very much, actually– and China robbing all our banks.)

He said, “You have a problem with ISIS, you have a bigger problem with China. And in my opinion, the new China, believe it or not, in terms of trade is Mexico.”

China and Mexico aren’t anything like that. The US isn’t even running much of a trade deficit with Mexico any more.

Mexico doesn’t actually, of course, have “our jobs.” Trump told anecdotes about US and foreign corporations siting factories in Mexico rather than in the US. He blamed this on Mexico, when the real problem is that US law doesn’t penalize US corporations for relocating abroad to evade taxes. President Obama and his secretary of the Treasury have been working on this. But Trump wasn’t offering a serious analysis. He was just riling up the angry white men.

Trump interspersed a few observations on foreign policy among his various tirades. He said of Obama, “Take a look at the deal he’s making with Iran. He makes that deal, Israel maybe won’t exist very long. It’s a disaster and we have to protect Israel.”

There isn’t an obvious way that Obama’s deal with Iran restricting its nuclear program to being solely for civilian purposes could cause Israel not to exist very long. But note that most of the Republican candidates say the same thing, as does Israeli PM Binyamin Netanyahu. That is, Trump’s stream of conscious serial falsehoods don’t actually end up differing much from GOP orthodoxy.

I love the Saudis, many are in this building. They make a billion dollars a day. Whenever they have problems, we send over the ships. We send, we’re going to protect – what are we doing? They got nothing but money.

If the right person asked them, they’d pay a fortune. They wouldn’t be there except for us.

And believe me, you look at the border with Yemen – you remember Obama a year ago, Yemen was a great victory. Two weeks later the place was blown up. Everybody.

But look at that border with Saudi Arabia. Do you really think that these people are interested in Yemen? Saudi Arabia without us is gone. They’re gone.

And I’m the one that made all of the right predictions about Iraq. You know, all of these politicians that I’m running against now, it’s so nice to say I’m running as opposed to if I run, if I run – I’m running.

So Donald Trump wants to charge Saudi Arabia for the US security umbrella, the way George H W. Bush charged them for the Gulf War.

I couldn’t tell you what he meant about Saudi Arabia not actually being interested in Yemen . I don’t think it is true.

Trump wants to deal with Daesh / ISIL by finding the right general, finding a MacArthur. But Daesh is a guerrilla problem that can’t be dealt with by infantry of the sort that MacArthur commanded in Korea. It doesn’t make any sense that Martin Dempsey, who is an Iraq War vet, wouldn’t know best the terrain and strategy for Iraq.

Charge Saudi Arabia money for providing it with security;

Find a general for Iraq.

It is going to be a hilarious summer.