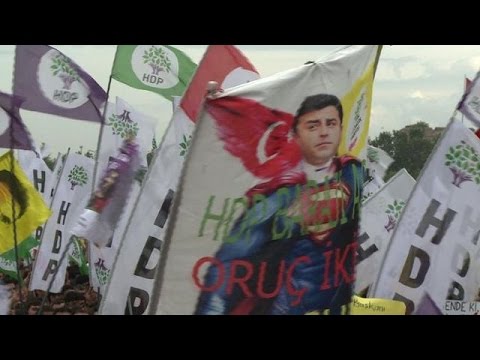 Whatever the election outcome on Sunday, prospects for Kurdish Peace Process are grim. Yet, regardless whether largely Kurdish People’s Democratic Party (HDP) passes the 10 percent threshold that will allow it to be seated in parliament, it has already acquired a charismatic authority with the pro-Kurdish constituency — an unprecedented development that poses a challenge to the guerrilla leadership of the Kurdistan Workers Party (PKK) in Qandil.

In Turkey’s critical elections on Sunday, all eyes are on the pro-Kurdish HDP, People’s Democracy Party. If the party passes the 10 per cent threshold, President Erdoğan’s dream of powerful presidency will fade away, since his Justice and Development Party (AKP) will not have enough seats to rule and change the constitution all by itself. Alarmed by the rise of HDP, Deputy Prime Minister Yalçın Akdoğan has repeatedly declared/span> that such an election outcome will result in the end of the Kurdish Peace Process. HDP’s loss, on the other hand, would never mean a clear victory for Erdoğan because (1) the HDP will lose, if it does, by only a small margin according to most polling agencies including pro-government ones (2)

There is a widespread consensus among HDP supporters holding that the AKP government manipulates the election outcomes fraudulently—as experienced in 2014 elections. Thus, a feeling of injustice and frustration will likely to increase in post-election Turkey, whereas the AKP votes will be in serious decline for the first time. Erdoğan’s monopoly over the AKP may face a cliff.

Since the Gezi Park protests in summer 2013, the AKP government has launched ambitious and divisive election campaigns—for local and Presidential elections in 2014 and the upcoming Parliamentary elections. At the very same time period, however, the government initiated the talks with Kurdistan Workers’ Party (PKK) guerillas for disarmament, known as the Peace Process. In this context, it was President Erdoğan’s request from HDP to run as a party and therefore take the risk of being eliminated by the threshold. The ruling AKP’s original calculation of Erdoğan was based on 2014 local election results: If the AKP and other parties repeated the same performance while HDP could not reach the ten percent threshold, the government would get two-thirds of Parliamentary seats—and acquire the ability to change the constitution to create a Erdoğan’s strong Presidential system unilaterally. If HDP did make it into parliament, they thought, that was also not a problem, since surely the pro-Kurdish bloc would want to go into coalition with Justice and development, as a part of the Turkish-Kurdish Peace Process. That would give the AKP plus the HDP 367 seats over-all, a two-thirds majority.

But, Erdoğan’s calculation was flawed. In the past few months, the rise of pro-Kurdish HDP votes has led to resurgence in Turkish nationalist votes favoring primarily the Nationalist Action Party (MHP). MHP’s stealing of AKP votes have made the plan B (a possible deal with HDP after the elections for a two-thirds majority) improbable. Erdoğan then has turned to Turkish nationalist discourse in the election campaign, claiming that there is neither a Kurdish question in Turkey nor a negotiation table with the PKK.

The HDP strategy, in turn, was clever. The party’s election campaign has targeted at Erdoğan’s Presidential ambition, giving a consistent message that HDP will not negotiate with Erdoğan in the case of passing threshold. This declaration attracted not only disenchanted Kurdish AKP voters— who have been increasingly frustrated after the government’s failed Kobani policy—but also Turkey’s leftist and liberal groups who would like to unite against the Erdoğan regime.

Regardless of the election results, one irreversible outcome of this tango is the rise of Selahattin Demirtaş as a charismatic leader. HDP’s inclusive language, which embraces other segments of the Turkish society—often referred as Türkiyelileşme projesi (Turkey-ization project)—has found its echo. At this moment, even if the HDP receives less than 10 per cent, its supporters will refuse to believe that the outcome reflected reality– since election fraud has become endemic in Erdoğan’s “new Turkey.” This point is critical: Demirtaş will enjoy the status of a victorious politician who garnered unprecedented sympathy from various segments of Turkish liberal spectrum. This fact is also difficult to digest for the PKK leadership hiding out over the border in Iraq’sin Qandil. Historically, only PKK guerrilla leader Abdullah Ocalan’s persona has acquired a symbolic value. Another charismatic leader is a challenge to the internal dynamics within Kurdish polity.

One particular issue can make the pro-Kurdish organizations unite after the elections: a demand for de-centralization and local governance reforms that enable pro-Kurdish municipalities in the Southeastern Turkey to be more independent. Focusing on this claim can especially work well for both Kurdish forces, the more militant and separatist PKK and the politically engaged HDP at a time President Erdoğan pushes the country toward ever more centralization around his palace. Reminiscent of the operations that targeted urban PKK activists during the dirty war of the 1980s and 1990s, the AKP government has now begun police raids against youth organizations linked to the PKK in Şırnak. The PKK claims that such operations will be wider in scope in the post-election period, signaling the end of the Peace Process.

The AKP aborted similar initiatives earlier in 2009 and 2011, only to launch a new negotiation table with the PKK each time. “Giving up smoking is easy,” says Mark Twain, “I have done it so many times.”

President Erdoğan may plan to consolidate his regime by pitting the right wing Turkish nationalist party, the MHP, against the Kurdish militants of the PKK. According to the centrist, pro-Kurdish HDP, Erdoğan’s dehumanizing language encourages violent attacks to their offices, reached 114 incidents in the past few weeks. Yet, such a divide-and-rule policy is a rough road. Internal disputes within pro-government media—even at the eve of the elections—indicate the tension between the AKP government deputies and the palace cronies around President Erdoğan. Without changing the constitution, Erdoğan’s push for de facto Sultanism may backfire. Moreover, if the AKP needs a coalition partner to form the government, the MHP will emerge as a serious option, making a shadow government under Erdoğan implausible.

Further polarization and turmoil are on the horizon in Turkey.

MUSTAFA GURBUZ is a policy fellow at Center for Global Policy at George Mason University and a research fellow at Rethink Institute in Washington, DC. He is the author of Transforming Ethnic Conflict: Rival Kurdish Movements in Turkey (Forthcoming, Amsterdam University Press).