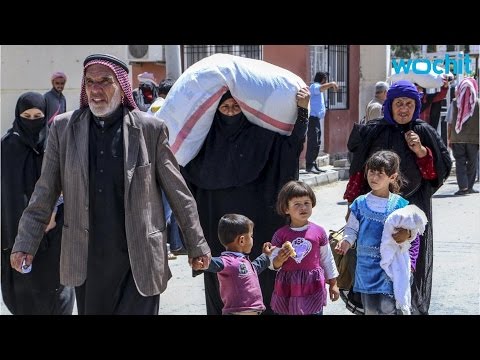 The leftist Kurdish Protection Forces (YPG) and their Arab allies, the Euphrates Volcano, continued their assault on Sunday on Daesh (ISIS, ISIL) positions in northern Raqqa Province in Syria, taking the village of Salouk on the outskirts of Tel Abyad. Tel Abyad lies on the border of Syria and Turkey and has been a significant supply route for Daesh to receive weapons and money from smuggled petroleum. Without a border with Turkey, the so-called caliphate or theocracy of Abu Bakr al-Baghdadi (the nom de guerre of Ibrahim al-Samarra’i) could be cut off from such resupply.

The advance of the YPG alarmed Turkish President Tayyip Erdogan, who complained that an extension of Kurdish control over the Turkish-Syrian border could pose a threat to Turkey in the future.

Last week Erdogan complained that the West was supporting Kurdish “terrorists” over local Arabs and Turkmen, whom its air force coalition was bombing in northern Syria.

The idea that the US is bombing Syrian Arabs or Turkmen in order to promote the Marxisant YPG is a little odd, to say the least. The US and its allies are striking Daesh targets, which has the side effect of benefiting the enemies of Daesh such as the YPG.

We may conclude that Erdogan is less disturbed at the idea of having a border with Daesh/ ISIL, proven mass murderers, than he is with the YPG. Erdogan has been mysteriously unconcerned by the rise of Daesh, and hasn’t given the US much help in rolling it back.

The YPG is the Syrian branch of the Kurdistan Workers Party (PKK), which the US lists as a terrorist organization, and which was responsible for war crimes during its insurgency against the Turkish state in the 1980s through about 2002. The YPG itself has been accused of using violent coercion against rivals.

The US says it is looking into the allegations against the Syrian YPG Kurds. At the same time, Washington and its allies are giving them and the Euphrates Volcano aerial support against Daesh, which has allowed the rebel advance.

In the past week some 15,000 refugees from Tel Abyad and its hinterland have fled into Turkey, and some Turkish officials have hinted darkly that this policy is a deliberate one on Washington’s part, aiming at the ethnic cleansing of Arabs and Turkmen in northern Syria in favor of Kurds.

Pres. Erdogan blamed the airstrikes of contributing to the Kurdish group’s capture of Arab and Turkmen lands.

He didn’t note that those lands had been usurped by Daesh!