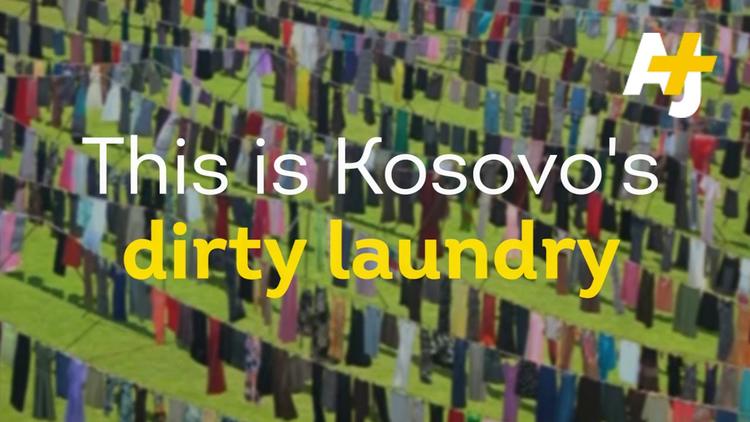 On 12 June, 5,000 skirts and dresses were hung on 45 clotheslines in the football stadium in Prishtina, capital of Kosova. “The laundry is washed clean, like the women who are clean and pure—they carry no stain,” asserted artist Alketa Xhafa-Mripa, the Kosovar originator of the art installation. The football stadium was chosen as the place of installation for the contrast with its masculine association, its centrality in Prishtina, and for the clear visibility of the skirts and dresses on the field.

In the 1998-1999 war in Kosova, an estimated 20,000 Albanian women and girls were raped by Serbian soldiers and especially Serbian paramilitary. Until now, there was no effective way of remembering this. Albanian culture is traditional and such matters could not be mentioned for fear of the social stigma. Almost all Albanians in Kosova are Muslim and this adds to the social conservatism.

The International War Crimes Tribunal in the Hague was particularly ineffective in dealing with rape in Kosova. Kosovar women who had been raped by Serbian forces and who had been convinced to testify as anonymous witnesses found that while their identities were protected while at the Tribunal in the Hague, they were revealed back in Kosova by Milošević’ team. They felt betrayed by the Tribunal, and some reportedly threatened to commit suicide rather than return to Kosova.

Sevdije Ahmeti, who had convinced the women to testify, said she would never again counsel women to testify under such circumstances. “If the Tribunal had understood the importance of family honor in Kosova, it would never have requested them to testify, or at the very least, it would have worked harder to maintain anonymity.” Sevidje Ahmeti later explained that only women with no close living male relative would even consider reporting a rape (Trix, F. “Underwhelmed”— Kosovar Albanians’ Reactions to the Milošević Trial,” in Timothy Waters (ed.) The Milošević Trial: An Autopsy. New York: Oxford University Press, 2013, 229-248).

Earlier, in the 1990s during the Bosnian War, Turkish women had sent white crocheted head scarves to Bosnian women who had been raped as symbols of purity and that they were martyrs. Again the attempt was to counter the social stigma that accrues to women who have been violated through no fault of their own.

What is more memorable and impressive about the Kosovar installation is its public nature. Even before it was put up, Alketa Xhafa-Mripa spent a month going around to different towns in Kosova hearing stories of survivors and encouraging people to donate skirts. Xhafa-Mripa who is Kosova-born but now lives in London got Tony Blair’s wife to make a donation. President Atifete Jahjaga, the first woman president of Kosova, also made a donation and supported the installation throughout.

More important are the local donations. A red satin dress with a rosebud pattern was donated with the message on it: “This dress has a bitter story.” And most important, fathers, husbands, and brothers brought dresses and skirts and helped in the installation.

As President Atifete Jahjaga said, “This is a call the break the silence, to fight the stigma, a call to act, a call to raising awareness, and a call for acceptance.” The fact that the clean skirts and dresses were hung out clothes-lines on 12 June, the 16th anniversary of the entry of NATO into Prishtina, a day of commemoration in Kosova is meant to bring the sacrifices of the women into a positive sense of community.

Frances Trix is professor of linguistics and anthropology at Indiana University.