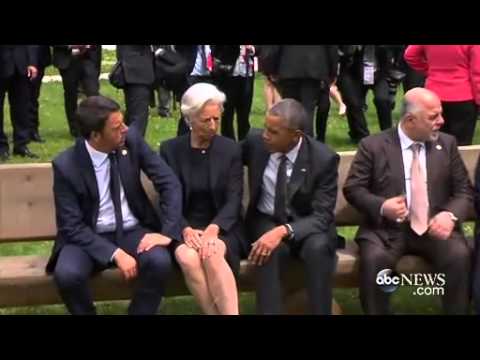 The Obama administration got itself some headlines on Wednesday morning by pledging to send a few hundred more military trainers to Iraq and to create a new base in al-Anbar Province.

But there is less to this announcement than meets the eye. The US has some 3000 military trainers and advisers in Iraq in bases only an hour’s drive from al-Anbar, who have only trained nearly 9,000 Iraqi troops in the past year, roughly three brigades or half a small division. US generals say they do see increased effectiveness among the newly US-trained troops. Increasing the number of US trainers 10 percent is a little unlikely to speed up the training process very much. At this rate it will take another two years for there to be as many newly-trained Iraqi troops as there are Daesh fighters in Iraq That is a pretty leisurely pace.

Ironically, the video from the G7 meeting where Iraqi Prime Minister Haydar al-Abadi couldn’t get the time of day from him probably symbolizes the president’s impatience with the slow pace of political reform, the real key to defeating Daesh.

The administration came under a great deal of pressure after the fall of Ramadi in the middle of May to Daesh (ISIL, ISIS) forces. The rogue so-called caliphate was now only 78 miles from Baghdad and was also in a position to menace the Shiite shrine city of Karbala. Ramadi is the capital of the huge western al-Anbar Province, which, however, is much less important than it looks on the map. The province probably only has a population of about 2 million, or 6% of Iraq’s 32 million population. The advance spurred Washington hawks and interventionists to demand a more muscular intervention, even though during the 8 years of the US occupation of Iraq it seldom actually controlled Ramadi itself.

Tuesday’s announcement appears to be Obama’s way of batting away the critics, who cannot say he hasn’t escalated US involvement or planned a strategy that would begin recovering territory from Daesh. But he’s attempting to deflect the complaints of the hawks without actually doing very much.

In the meantime, the major Obama contribution to the war effort against Daesh is probably not troop training but aerial bombardment by the US and its coalition allies. The refinery city of Beiji, which the government claims to have recovered this weekend, could not have been taken without repeated bombing strikes on the part of the British Royal Air Force. Arguably, taking and holding Beiji is far more important than taking and holding Ramadi, which has virtually no resources. Crude oil is worthless for smuggling, but refined products such as kerosene and gasoline are easily moved. Keeping these valuable commodities out of the hands of Daesh has to be the logical goal of any Iraqi government. Obama has also sent equipment and munitions to the Iraqi military, with more on its way.

Obama has repeatedly said that defeating Daesh has to be the work of local Middle Eastern forces. Despite having spoken of rolling it back and annihilating it, Obama’s actual policy appears to be containment until such time as local anti-Daesh forces can get their act together. Containment is probably the best that can be achieved under these circumstances, unfortunately, though it is desirable that Daesh be humiliated and taken down a notch as quickly as possible. That won’t happen until Iraqi PM al-Abadi cultivates significant Sunni Arab allies. Actually, he is now losing the Sunni clans of al-Anbar because they’re tired of waiting for him to arm them and support them.