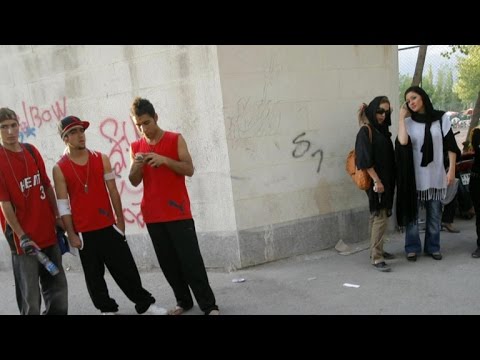 Discussions with a variety of ordinary people in shops, on the street and in a couple of cases in private homes are very revealing about the public attitude toward broad economic and political affairs in Iran.

I mentioned in an earlier report that people tend to be cynical about economic progress. There is no doubt that Iran has a robust internal economy. Oil production continues even if the oil can’t be exported. It is sitting in storage–a great deal of it–waiting for the flood gates to open. Manufacturing is active everywhere. For things that Iran produces from its own natural resources there is no shortage of supply. Our tour is surprised to see decorative building stone like marble and alabaster used as basic building materials. They are in great supply. One of our party said–where would you have an outbuilding bathroom with a marble floor? I have mentioned the enormous amount of food available. One man I talked to who was in an office issuing building permits pointed out that any manufacture that has anything to do with food processing is booming, but manufacturing in other sectors is slowing down. One of the booming products is non-alcoholic beer which comes in “classic” flavor, but also in lemon, peach and “tropical.” It is available in many brands and everywhere and is more popular than sugary soft drinks. The cans proclaim the B and C vitamins the drink provides.

Nutrition is noticeably improved. Even high-end restaurants will have a wide variety of vegetarian dishes on a “salad bar” with yoghurt dressings and low fat preparations. One nutritionist I talked to said that the Ministry of Health has made a concerted effort to improve food in restaurants, eliminating trans fats and the use of good vegetable oil as opposed to clarified butter, traditionally used.

When I ask about this seeming progress, I get very negative answers. Everyone knows that industry is booming. It is the conditions under which it is booming that are looked upon askance. The disparity between booming industry and lack of employment is a particular cause for gloomy thoughts. The feeling that others at the top are getting very wealthy while people at the bottom have to survive on very little is pervasive, and it certainly appears to be as true as it is in the United States. Still in Iran there is a strong social safety net to protect the disadvantaged. For one thing basic medical care is free and there is a universal pension system for workers. One can survive on a worker’s pension, but it is a limited existence. Lower income citizens receive food and gas subsidies (though the latter will be completely eliminated soon).

The most common remark I receive from admittedly middle-class people is unhappiness about unemployment for university graduates. This is understandable. Iranians see learning as a key to social mobility. University education is now freely available, though in the Free University (Daneshgah-e Azad) one must pay a nominal tuition. In older days higher education was very much for the elite and well (often privately) educated. Others had to claw their way into university education. Now that it has been made an almost universal good, people’s expectations are very high. But with 4 million university graduates coming out this year (5% of Iran’s total population) unemployment in higher-ranking jobs is almost inevitable. Iranian business has also picked up a trick from American businesses and started to hire contract workers. After a year or two they are dropped, creating more resentment and unhappiness.

Another theme quite common among the people with whom I have talked is disapproval of spending public money to help neighboring and other allied states. Iranian expenditure in Iraq, Syria and Lebanon is the subject of frequent complaint, as is the support of Afghan refugees (who must work in competition with Iranian citizens). In Islam one only tithes out of surplus income. Family expenses must be fully provided before even a penny is given to charity. One aphorism Is roughly: Money needed for the home is forbidden (haram) for the mosque. This analogy is applied to Iran’s foreign expenditures.

The Revolutionary Guards are benefiting from the economic sanctions, according to many of the people I have talked to. Because they control the borders, they control the “import” of many goods. They are referred to in veiled terms in the press and on TV. Some are identified as the chief forces opposing the Lausanne/Vienna accords, because it will cut into their effective monopoly. Whatever the mechanism, everything is available to buy here for a price. Every brand of household appliance, electronic equipment and automobile. There are even Apple stores–whether they are legally branded or not can’t be determined.

However, not all things are available. We stopped on the road at a camel stable–an old Caravansarai. The owner is upset because the sanctions, he says, are preventing him from importing camels, and no one is breeding them effectively. His herd is being sold off for meat in nearby Na’in.

Change takes place gradually. Talking with a journalist and her documentary film-maker husband, she mentioned both the precariousness of social critique, and the need to do it. The post-Revolutionary generation of Iranians is now in their thirties and early forties. They make up now more than half of the population, and they are beginning to flex their political and economic muscles. Bright, intrepid and opposed to the personal restrictions of the past, they are slowly transforming public culture. This is tolerated today. The line is drawn when one is threating the actual power structure of the State.

The husband was wearing a gold wedding ring–technically forbidden for Muslim men (though women can wear as much gold as they want). I merely pointed this out to him, saying simply “gold!” and he smiled, knowing that this was his little bit of social protest. His wife was wearing a bright red headscarf–impossible even a few years ago. Her friend, who heads a travel office, had a blouse open about three inches from the top with no comment from anyone. The minister of culture announced that alongside fasting for Ramazan and mourning during Moharram, the people need musical culture in open defiance of many conservative clerics.

Similarly the perpetual fight over women’s sports events goes on. In Yazd we watched the exercises in a traditional Zurkhaneh (House of Strength) where men practice traditional athletics. Women are allowed to attend this–indeed there were several women in attendance when we were there. However, women are still not allowed at men’s wrestling matches (there are women’s wrestling matches that they can attend). The question of women viewers in soccer stadiums is still not quite settled, but women hope that they will be able to attend soon.

But these little indicators are merely surface events masking more comprehensive social change. With experience from the past, Iranians know that pushing too hard, too fast can only cause trouble. So these small things are boiling the frog by degrees. There is no question that this change has been continual and cumulative until we have arrived at a much braver, much freer population than in the immediate post-Revolutionary era, despite the gloomy assessments many people make about economic and political conditions.

William O. Beeman is Professor and Chair, Department of Anthropology at the University of Minnesota