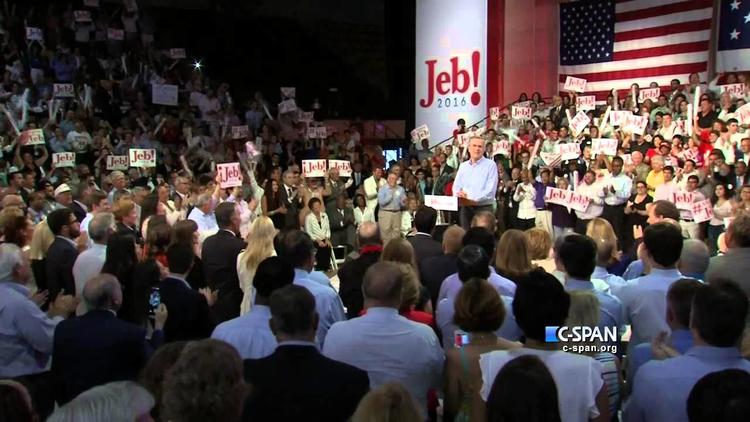 Jeb Bush announced his run for president on Monday. It is hard to know what his Middle East policy would be from his wibbly wobbly pronouncements, but that it would be imperial and aggressive can be deduced from his foreign policy advisory team, including Neoconservatives such as Paul Wolfowitz, the architect of the war of aggression on Iraq in 2003.

Jeb Bush regretted the lapse of the so-called USA PATRIOT Act and dislikes the Bill or Rights’ Fourth Amendment to the US Constitution, questioning any restraint on government search and seizure of Americans’ mail and personal effects. In this he does not differ from Barack Obama.

Bush rejects President Obama’s diplomacy with Iran. He views Iran as “a nation that has waged a relentless campaign of terror and war-by-proxy against U.S. troops and American allies for more than three decades.” He damns the current Kerry-Zarif negotiations as leaving in place Iran’s nuclear infrastructure and potentially allowing it to brandish nukes and intimidate other countries in the Middle East. Apparently, as president Bush would cancel or renege on any deal reached with Iran and put the two countries on a war footing.

(Iran has not invaded another country in modern history. “Terrorists” it supports include the Shiite militias of Iraq with which the US is now allied to which it arms and to whom it gives close air support. So it is difficult to see how Bush can call Iran terrorist for supporting these groups but can exempt the US itself. Iran also supports Hizbullah in Lebanon, which grew up as a resistance movement against the two-decades long Israeli occupation of ten percent of Lebanese territory, which caused the 1.3 million Lebanese Shiites to mobilize to regain their homeland. International law does not see movements of resistance to occupation as “terrorist.”)

Bush pledges knee-jerk support to the far, far-right Israeli government of PM Binyamin Netanyahu. He referred to the Obama administration pressure on Tel Aviv to grant statehood to the stateless and rights-less Palestinians as “schoolyard antics.” He as much as said he would give up any pressure on Netanyahu for a two-state solution and surrender to the latter on all major policy issues. Bush made the mistake of associating himself with his father’s secretary of state James Baker, an old-time realist who has ties to the Gulf Arab monarchies and who has long been annoyed by Israeli aggression, expansionism and intransigence. As a result, Bush lost the support of billionaire casino mogul Sheldon Adelson, widely accused of corruption in China, who put $100 million* into the 2012 presidential campaign and now seems to be supporting Mario Rubio. Bush is clearly hoping that by groveling to Netanyahu he can patch things up with Adelson.

Bush more or less supports his brother’s Iraq War of 2003 and the subsequent brutal military occupation. Rather than seeing Daesh (ISIS, ISIL) as a reaction to that occupation by displaced Sunni Arabs, he blames its rise on Obama’s withdrawal of US troops from Iraq in 2011, a withdrawal negotiated by . . . George W. Bush.

Bush wants to have more US troops on the ground in Iraq and to embed them in Iraqi military units. He appears not to know that there is virtually no extant Iraqi army in which to embed US troops. He seems also not to know that most of the troops are pro-Iran Shiites who would probably frag the Americans if Bush does to Iran what he says he is planning to do to it. The really effective fighting forces are Shiite militias who probably would not accept American embeds. In short, his plan for Iraq seems both aggressive and escalationist and also completely ignorant of the realities on the ground there. Where have we seen a Bush with that approach to Iraq before?

Bush doesn’t care anything about ordinary Middle Easterners or military dictators who oppress and disappear them: CNN reported, “Jeb Bush says he can’t understand why the White House has told Sisi “you’re not on our team” as jihadism spreads like wildfire through the Middle East.”

The Bushes are closely connected to the oil industry and likely Jeb would pursue policies intended to benefit it in the Middle East.

Bush has become more or less a climate change denier and calls scientists “arrogant” for concluding that man-made global warming is a virtual certainty. No doubt he has long thought them full of themselves over this gravity business and the earth being round, too. His Monday speech implicitly pledged to ramp up carbon emissions by drilling for more oil and gas.

I couldn’t find that he has said anything specific on what his Syria policy would be, but apparently he never met a Middle East intervention he didn’t like.

In the forecast if he wins: war with Iran, troop escalation in Iraq, fawning support of the Israeli Likud Party’s policies in the West Bank and Gaza. The trifecta of bad US policy in the Middle East.