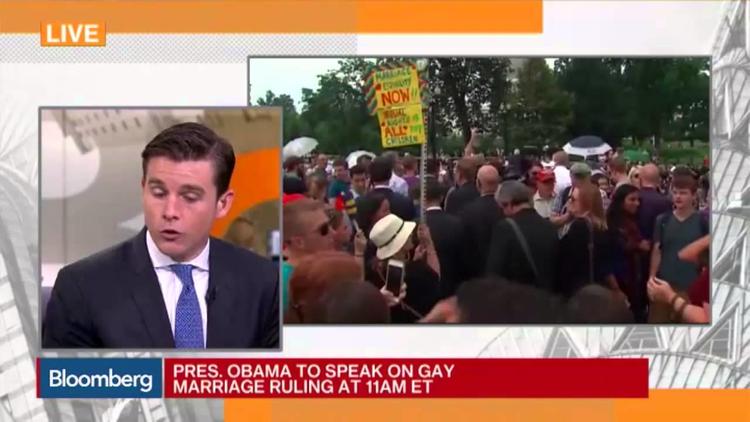 By Danielle Weatherby, Timothy Holbrook and Robert A. Schapiro | (The Conversation) | – –

Editor’s note: Today the Supreme Court ruled 5-4 that marriage is a legal right – striking down same-sex marriage bans in 14 states and ordering states to recognize same-sex marriages performed in other states.

Marriage is a fundamental right

Today’s decision in Obergefell v Hodges came out on the anniversary of the decisions in Lawrence v Texas and US v Windsor, two other landmark decisions for same-sex couples. Justice Kennedy, the modern hero of LGBT rights, authored the majority opinion.

In his opinion Justice Kennedy traced the court’s invocation of the Fourteenth Amendment’s fundamental rights analysis, in striking down previous marriage bans like the Defense of Marriage Act’s definition of marriage as between one man and one woman in US v Windsor. Fundamental rights are certain rights, both explicit and implicit in the Constitution, that the court has said are “deeply-rooted in this Nation’s history and tradition.”

And Justice Kennedy also summarized the historical shift of the institution of marriage.

Marriage, he explained, has gone from a male-dominated legal entity, governed by the law of coverture (a legal doctrine that a woman’s legal identity is subsumed by her husband’s when they marry), to an institution that sanctifies a loving relationship between two individuals. Kennedy noted that “the annals of human history reveal the transcendent importance of marriage.”

The majority opinion in Obergefell v Hodges echoes the broad-sweeping fundamental rights language used before in the majority opinion in US v Windsor. “Marriage,“ wrote Justice Kennedy in today’s opinion, “is the keystone of the Nation’s social order.” Further in the opinion, he used phrases such as: “Marriage is inherent in the concept of individual autonomy” and “choices about marriage shape an individual’s destiny.”

Ultimately, the decision upheld the dignity attached to personal choices about marriage and the right to autonomy to make choices about whom to marry.

The court refrained from categorizing “sexual orientation” as a suspect class (that is, a class of individuals who have been discriminated against historically). This means the court bypassed the dicey equal protection analysis that would have engendered a level of higher judicial scrutiny in analyzing a law as to whether it has violated the rights of a suspect class. Had sexual orientation been elevated into the category of a suspect class, the decision would have had broader implications for the LGBT community.

Many commentators thought that Chief Justice Roberts might be persuaded to conclude that same-sex marriage bans discriminate on the basis of gender.

But Roberts’ staunch dissent (which was joined by Justices Thomas and Scalia) focused on who should bring about change on the marriage issue. Should it be the nine justices of the United States Supreme Court, or the people, by exercising their right to vote?

The dissenters maintained that the five justices in the majority usurped the right of states and of the people to engage in the democratic process.

The majority answered these concerns, pointing to referendums, legislative debates, grassroot campaigns, and over 100 amici briefs as evidence of a long and robust public deliberation.

The tension between religion and civil rights will undoubtedly continue to play out. Conservative states deeply rooted in religion will push back with legislative measures, such as overly robust state religious freedom laws, that aim to find a loophole around the court’s same-sex marriage decision.

The decision in Obergefell v Hodges will give legal enthusiasts much to talk about for the foreseeable future. But, for same-sex couples, it will have real-life and immediate consequences.

Danielle Weatherby is Assistant Professor of Law at University of Arkansas

Today’s outcome in Obergefell v Hodges, which rules that bans on same-sex marriages are unconstitutional, was expected by many. What wasn’t clear, however, was the reasoning the court would use.

Are these bans unconstitutional because there is a fundamental right to marriage that must include same-sex couples under the Due Process Clause of the Fourteenth Amendment?

Is sexual orientation, like race, a suspect class such that the bans violated the Equal Protection Clause because they lacked a compelling justification?

Or, even if sexual orientation was not a suspect class, did such bans lack a rational basis?

The lower courts, even those finding a constitutional right to same-sex marriage, had splintered as to the reason why such a right existed.

Justice Anthony Kennedy wrote today’s majority opinion, and much of this splintering by the lower courts was the result of his previous opinions involving the rights of gays and lesbians.

In striking down anti-sodomy laws in Lawrence v Texas in 2003, Justice Kennedy was a bit cagey, rooting the decision in the Due Process Clause, but never explaining what fundamental right, if any, was at issue. He couched the reasoning in terms of privacy but never expressly defined the right. It was unclear, as Justice Scalia pointed out in his dissent, whether the majority was identifying a fundamental right or simply saying that anti-sodomy statutes served no rational basis.

Kennedy’s decision in United States v Windsor in 2013 was even more confusing. In Windsor, the Supreme Court found part of the Defense of Marriage Act (DOMA) unconstitutional as it related to federal recognition of same-sex marriages.

DOMA defined “marriage” for federal purposes as being between a woman and a man. The court found the law unconstitutional, requiring the federal government to recognize same-sex marriages from those states that had legalized them. But the court expressly did not find a constitutional right to same-sex marriage. Justice Kennedy’s reasoning was unclear, mixing concerns of dignity for same-sex couples with preservation of the states’ prerogatives to regulate domestic relationships, including marriage.

Now, in Obergefell v Hodges, the veil has been removed: marriage is a fundamental right that must include same-sex couples under the Due Process Clause. This reasoning, though, is rather narrow. It leaves to another day the issue of whether sexual orientation should be treated as a suspect class, limiting the potential sweep of the decision.

Interestingly, all four dissenters – Chief Justice John Roberts and Justices Antonin Scalia, Samuel Alito and Clarence Thomas – wrote their own decisions in this case, something that is rather rare. All seemed concerned with the court’s disruption of the political process taking place in states that had yet to legalize same-sex marriage.

The court’s decision undeniably disrupts that process. All of the dissenters noted future concerns with the intersection of same-sex marriage and religious freedoms and beliefs. Though Justice Kennedy tried to assuage those concerns, the dissenters rightfully noted that conflict is likely to come down the pipeline.

Indeed, the Chief Justice’s dissent, taking a page from previous decisions by Justice Scalia, laid out many of the likely next legal challenges, including the issue of whether bans on polygamy can withstand constitutional challenge. All of these issues will be affected by the court’s decision.

Finally, the rhetoric of all of these opinions is important. The majority and dissents were respectful of gay and lesbian couples, which marks a sharp turn from previous decisions like Bowers v Hardwick in 1986 and even Lawrence v Texas in 2003. In his dissent in Lawrence, Justice Scalia accused the court of taking sides in a “culture war.”

But today the court was respectful to same-sex relationships. The chief justice, while dissenting, gestured to same-sex couples to “Celebrate the opportunity for a new expression of commitment to a partner.” This rhetoric matters, as it demonstrates the gains in respect for LGBT relationships, even by those who oppose marriage equality as a constitutional matter.

In this regard, the lesbian, gay, bisexual and transgender community has truly made progress.

Judicial confirmation battles matter. Sometimes they matter a lot. That was the message of today’s historic decision finding a constitutional right to same-sex marriage.

In 1987, after a heated confirmation fight, the Senate rejected the nomination of Robert Bork.

Much of the confirmation debate focused on Bork’s opposition to the Supreme Court’s recognition of rights not firmly rooted in the text of the Constitution, such as the right to privacy.

Today, the significance of that confirmation battle became clear, as Justice Kennedy relied on evolving rights, such as the right to privacy, in casting the deciding vote in favor of a right to same-sex marriage.

Robert Bork died several years ago, but it is unimaginable that Robert Bork would have written an opinion like the one authored by Justice Kennedy in this case.

With today’s decision, Justice Kennedy completed his 20-year journey leading the court toward a recognition of the rights of gays and lesbians.

That journey began in his 1996 decision in the Romer case, and since then Justice Kennedy has written every major Supreme Court opinion on gay rights issues.

In each of those cases, Justice Antonin Scalia has penned a vituperative dissent, criticizing the court for imposing on the entire country the values of an elite legal culture.

Today was no exception.

Chief Justice Roberts’ dissent merely emphasized the general danger of courts intervening in matters that might best be left to the democratic process. Justice Scalia took pains to point out the particular ways in which this Supreme Court is unrepresentative.

Focusing the personal characteristics of his colleagues, Justice Scalia wrote:

Four of the nine are natives of New York City. Eight of them grew up in east- and west-coast States. Only one hails from the vast expanse in-between. Not a single South-westerner or even, to tell the truth, a genuine Westerner (California does not count).

One could paraphrase Justice Scalia’s comments in more patently political terms: This is a blue-state court ignoring red-state values. Justice Scalia’s reference to the religious affiliation of his colleagues continues that red-state theme: “Not a single evangelical Christian (a group that comprises about one quarter of Americans), or even a Protestant of any denomination.”

Justice Scalia’s dissent appears aimed to provide fodder for a counterrevolution in the culture wars.

Justice Scalia’s language is unusually personal, and it is notable that only Justice Thomas joined his dissent.

The theme of all four dissenters, however, was clear: the court should leave same-sex marriage to be decided by legislatures.

However, that was exactly the issue on which the Bork confirmation fight turned. In 1987, the people of the United States insisted on a court that recognizes certain fundamental rights as beyond political control.

There is no reason to believe that the public feels differently today.

Robert Schapiro is Dean and Professor of Law at Emory University