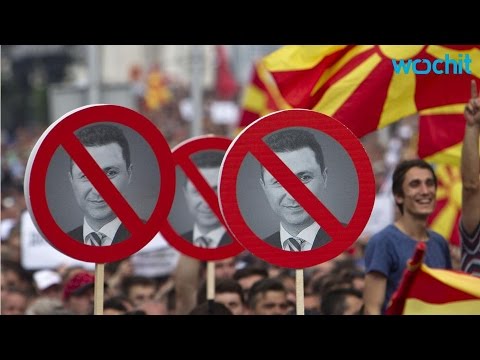 Now it appears, thanks to EU mediation, there will be new national elections in Macedonia next April 2016. In one sense it is quite early—there were national elections in April 2014 in which Nikola Gruevski, president since 2006, was once again elected. But in another sense, these elections are not all early. Macedonia has been simmering politically for several years.

The current political tension is between opposition leader Zoran Zaev of the Social Democrats and President Nikola Gruevski of the VMRO-DPME party. Gruevski, a rightist technocrat, has had control of most media in this landlocked Balkan nation of two million. And yet Zaev’s allegations surfaced.

Zaev accused Gruevski of wiretapping 20,000 people, including judges, police, politicians, religious leaders, and foreign diplomats. Slowly, over the past six months, Zaev released documents to prove it along with embarrassing content. As public opposition to Gruevski grew, Gruevski’s responses morphed from accusing Zaev of dealing with a foreign power, to forbidding him from leaving the country, to accusing him of wiretapping.

In spring of this year, Zaev made public emails allegedly from Gruevski that appeared to show how four years ago Gruevski had tried to cover up the killing of 21-year old Martin Neskovski by special security police the night of Gruevski’s victory in the 2011 election. News of the attempted cover-up was not well received. The first week in May this year there were large demonstrations in Skopje, the capital of Macedonia, against Gruevski.

Gruevski’s initial response after the emails of the Neskovski killing were made public was to let the Minister of the Interior and the Minister of Transport resign. This did not work. Another large opposition demonstration was planned for the following Saturday in Skopje.

Then on that Saturday, May 9, an alleged “terrorist incident” took place in the city of Kumanovo in which eight police and fourteen Albanians were killed. Gruevski called for flags at half-mast.

Albanians in Kumanovo immediately spoke up to say that they had no part in this, that it was not what it seemed. The government then came out and acknowledged that the Albanians who were killed were not from Macedonia, but from Kosovo. There is a smuggling route that goes through there; it is anyone’s guess who these convenient Kosovars were.

To understand why this was so convenient a distraction for the government, it is important to know that officially Macedonia is 65% Macedonian Slav, 25% Albanian Muslim, and the rest Turk, Roma, Serb, Vlach, and Bosniak minorities. The main tension that the government was trying to exploit was between Macedonian Slavs and Albanian Muslims. Indeed, in 2001 there had been incidents between Slavs and Albanians which led to the internationally negotiated Ohrid Framework Agreement which guarantees certain rights for minorities with 20% or more of the population within a district.

Only this time, for the first time, the distraction of Macedonian-Albanian animosity did not hold. In public demonstrations against Gruevski, people had begun putting Macedonian and Albanian flags side by side to emphasize that they did not want to be divided. This was unheard of in a country where there had been fighting between the two groups in 2001, and economic hardships had made ethnic tensions worse.

On 10 May, a 40-year old Albanian man from Kumanovo spoke out in Macedonian. It was carried on YouTube and has been seen by over half a million people—a quarter the population of Macedonia. In the video he decried the machinations of the police action. He spoke from the heart.

Where is the food for the table? Where is the economic zone that the government keeps talking about? . . .

Near the end he put his arm around an older Macedonian man. He added, “Nationalism and terrorism are constructed things to divide us.”

The YouTube video, seen by half a million, is unprecedented. Will Macedonian Slavs be able to hear the Albanian man as a person, and not be fearful or resentful of Albanians as a group? That would be the beginning of real change for Macedonia.

Since then there have been two large rallies of 10,000 people in Skopje: one for the opposition, and one for Gruevski. So there are still many supporters for both. Most employment is tied to party affiliation in Macedonia. Clearly, the problems are not simple.

They have yet to work out who will rule in the interim. It should be an interesting period in Macedonia.

Frances Trix is professor of linguistics and anthropology at Indiana University.