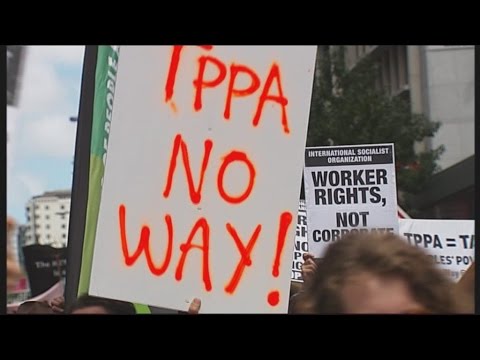 The Senate’s Fast Track bill package failed in the House today, following a landslide vote to reject a piece of the legislation that was necessary to send the bill to the President for approval. The White House has been working alongside powerful corporate lobbyists and sympathetic lawmakers to win enough support among representatives. Despite all of that—and a personal visit by the President to the Capitol urging support for the bill this morning—it still failed. The vote today is a strong signal that even these powerful interests and politicians could not outdo the massive popular opposition that we have all demonstrated against Fast Track and backroom corporate deals.

All of Congress’ procedures and various rules can get pretty confusing, but today’s trade votes were especially so. Now that the dust has somewhat settled from earlier today, we can make better sense of what exactly happened.

The Senate bill that passed a few weeks ago was a package bill, which had several parts, including:

2. Trade Adjustment Assistance (TAA), which essentially contains rules on how the legislature can fund programs for workers who may lose their jobs from trade agreements.

At some point yesterday, the Republican House leaders decided to vote on these two parts separately and vote on TAA first.

In the final minutes of debate over Fast Track, Minority Leader Nancy Pelosi finally came out to state her position on the bill. She called for Fast Track itself to be slowed down, so that they could go back in and fix it to ensure that the negotiations became more transparent and accountable to the American people. She ended by saying that she would even vote against TAA in order to improve the process.

Her strong remarks turned out to be highly influential in getting Democrats to come out against the bill.

So when the vote on TAA was finally held, it failed in a landslide vote of 126 to 302. Since TAA was packaged with Fast Track, this should have meant that both bills were defeated. But House Majority Leader Boehner proceeded with a vote on the Fast Track portion of the bill anyway, even though technically the bill was no longer viable for Presidential approval. Unfortunately, Fast Track passed by a vote of 219 to 211.

Not willing to give up, the Republican House leadership voted to force yet another vote on TAA next week. If TAA passes next week, all of these parts could still move together as a single package, straight to the President’s desk. If the TAA fails next week, then Fast Track will move back to the Senate to see if it can pass without TAA—giving us another chance to oppose it.

Now it’s going to take somewhat of a miracle for the President and House Republicans to change their mind on TAA by such a large margin (around 180 votes) by Tuesday—that’s their deadline on holding that second TAA vote. But we know that the White House and proponents of these secretive, undemocratic agreements are willing to do almost anything to pass these deals with even less oversight from Congress.

So while it’s not perfect, today’s vote was a temporary defeat of Fast Track. This vote was the result of a powerful, diverse coalition of organizations and individuals that came together to fight Fast Track over the last several years. We can all celebrate our collective work to stop the passage of secret, undemocratic agreements.

The fight isn’t over. We need to keep blocking the passage of Fast Track. The more we can delay it, the harder it becomes for the White House to try and sneak through their corporate agenda through these backroom deals. The longer it takes them to pass Fast Track, the more we time we have to educate each other and tell our representatives that we fully expect them to represent us and our rights online, not the interests of major multinational corporations.

The Nation: “Is the Trans-Pacific Partnership on the ropes?”