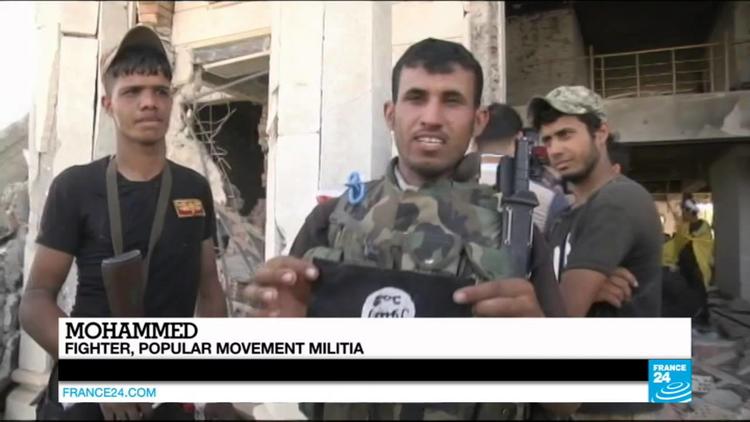 The hostility between the US and Iraq’s Shiite militias seems to have slowed. One leading militia member even went to the US. Is this the beginning of a new, happier relationship and closer battle field cooperation?

Last week Captain Amir al-Saadi, whose unit is based in the Habbaniyah camp in the Anbar province, received a phone call that made him very happy. Finally his troops, who were fighting the extremist group known as the Islamic State in the province, were going to get the weapons he had asked for months ago.

“It’s a miracle,” al-Saadi said. “Finally we’ve been able to get anti-tank weapons that are capable of destroying armoured vehicles. The Islamic State group has been using them against us by filling them with explosives and we haven’t been able to stop the vehicles because we didn’t have heavy enough weaponry. The government doesn’t have these kinds of weapons,” al-Saadi said. “But we heard that the US would supply us with them.”

Al-Saadi believes that his unit is finally getting the heavy weapons they wanted for so long because of “an agreement between the Shiite factions and the US that was brokered by the federal Iraqi government.” Previously, al-Saadi thinks, the US wouldn’t even send light weapons to the Iraqi army because they were so worried about these falling into the hands of Shiite militias. All this now seems to have changed, al-Saadi says.

But over the past few days there seems to have been a serious attitude adjustment. The Shiite Muslim militias, which are mostly made up of volunteers and not part of the official Iraqi army but play an extremely important role in combatting the IS group anyway, have stopped criticising the US’ role through their various media outlets. Rumours spread by leaders of the militias, where they accused the US of dropping supplies to the IS group and thereby assumed they were allied with them, have not been repeated again.

Along with the decrease in accusations, comes an increase in what appears to be cooperation between the two parties. A few days ago Ahmed al-Assadi, a spokesperson for the Shiite militias, also known as the Popular Mobilisation Units, who also heads one of them, the Jund Al Imam brigade, went to the US; the Jund Al Imam brigades are fighting the IS group in the Salahaddin province.

NIQASH contacted other officials to ask why al-Assadi was in the US but they would not contact on reasons for his visit. Rumour had it that the visit had to do with increased cooperation between the US and the Shiite militias.

“The international coalition has started to change its position in regard to the Popular Mobilization Units,” says one official close to the Iraqi Prime Minister, Haider al-Abadi; he was speaking on condition of anonymity because he was not supposed to speak to media on the topic. “In the past they used to reject any cooperation with this units outright. Now that attitude seems to have changed.”

The official had been with al-Abadi in Paris in early June during a conference to discuss the international strategy in the fight against the IS group. “Representatives of major powers in the coalition approved of a plan presented by al-Abadi that included the militias,” the official said. “Nobody was opposed.”

This is despite recent comments by the likes of US General Lloyd Austin, commander of US Central Command, who told politicians that after “three tours in Iraq commanding [US] troops who were brutalized by some of these Shiite militias, I will not, and I hope we never, coordinate or cooperate with Shiite militias”. Austin made those comments in late March during the fight to recapture the city of Tikrit. During these battles, the US-led international coalition said air support for the fighters was conditional on the withdrawal of the Shiite militias from the mostly-Sunni-populated city.

However that situation has changed and was especially impacted by the fall of the city of Ramadi, one of the biggest cities in the province of Anbar. Here the Iraqi army and security forces failed once again – after months defending the city, soldiers left the city undefended and as yet, nobody is completely sure why they went. The fall of Ramadi has meant that the extremist IS group are a lot closer to Baghdad than they were before. Even though it seems highly unlikely they would be able to attack this area, the extremists are also a lot closer to the large military base, Camp Taji, where most of the foreign soldiers, including US army personnel, are based.

After the fall of Ramadi, it became clear that the Shiite Muslim militias – unofficial or not, welcomed by Sunni locals or not – are just about the only force capable of halting the IS group. One US media report described them as a “necessary evil”. The Shiite Muslim militias have started a new campaign in Anbar province, even though the province is mostly populated by Sunni Muslims. The militias are the only “boots on the ground” apart from the Iraqi army and they called for all volunteers to be on full alert for an ongoing campaign in Anbar.

At the same time, despite misgivings by US politicians and commanders like Austin, the international coalition has been conducting air strikes that assist the Shiite militias. The repeated collapses of the Iraqi army, the failure to establish an Iraqi National Guard, that enlists other sects and ethnicities to fight against the IS group, and the fact that Sunni Muslim volunteers who want to fight the IS group haven’t been assisted, are all reasons why closer cooperation with the Shiite militias seems inevitable.

Another problem for the US is an increasing antipathy between themselves and Sunni Muslim locals who say they would fight against the IS group. “The US ambassador promised us that his country wouldn’t let Anbar fall under the control of the IS group,” Saleh al-Issawi, deputy head of Anbar’s provincial council, told NIQASH. “But the US didn’t keep their promise. Sunnis can no longer trust the Americans.”