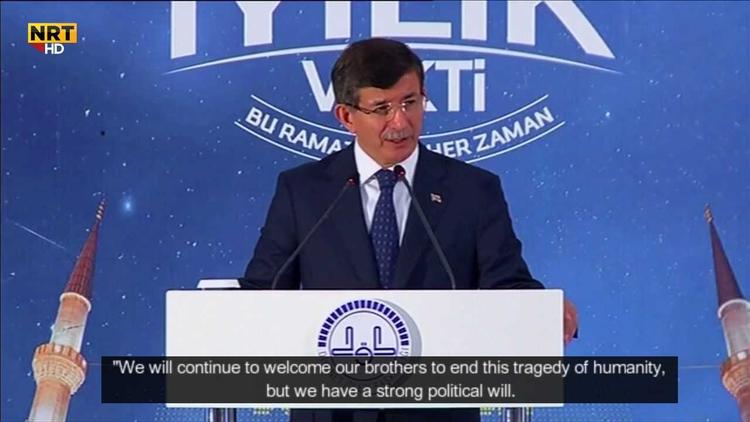 So I am going to tell you a story about Turkey, Syria and the United States. It may or may not be true. Its details may or may not have happened, though there is reason to think they did. It is a story. The point is to see if the story makes sense of what has appeared in the news but which has not been explained.

The Obama administration decided last summer to begin bombing raids against Daesh (ISIS, ISIL) in Syria, along with some allies such as the UK. Bombing raids like that don’t really amount to anything, though, without some infantry or guerrilla force on the ground to take advantage of them. Moreover, it wasn’t much good to destroy Daesh assets around Raqqa if they could just import more via Turkey through the checkpoint for Raqqa Province, Tel al-Abyad.

Daesh was hungry to control all of Raqqa Province, including the Kurdish canton of Kobane in the far north, which would give them yet another checkpoint crossing with Turkey, for bringing in men and supplies. So on 19 September, 2014, Daesh struck at the city of Kobane, provoking 120,000 panicked Kurds to flee over the border into Turkey.

President Obama called up Turkish President Tayyip Erdogan in my story, and said, “Tayyip, we need your help to defend Kobane.”

And Tayyip replied, “Mr. President, if we strengthen the PKK terrorists in Kobane on the border with Turkey, that will be a future security problem for my country when they hook up with the fighters in Qandil in Iraq and start intensive car-bombing of my cities like Diyarbakr in eastern Anatolia.”

[The strongest political force in Kobane is the far-left Democratic Union Party, with its paramilitary, the People’s Protection Units (YPG). Although it is technically a branch of the Kurdistan Workers Party (PKK), which the US and Turkey consider a terrorist organization, it is autonomous and does not have a line of command to the PKK.]

So President Obama goes to Massoud Barzani, the president of Iraqi Kurdistan, and says, Erdogan won’t help fight Daesh in Kobane because he is afraid of the leftist Kurds there. Can you give us some nice, conservative, bourgeois fighters to defend the city?” The US military has strong relationships with the Peshmerga from Iraq War days and knows how to work with them.

And Barzani is happy to oblige. And Erdogan is pressured to acquiesce. So Peshmerga from Iraqi Kurdistan are allowed to pass over Turkish territory to Kobana and help fight off Daesh.

But the reinforcements are not enough and Kobane could still fall. So a t the beginning of this year Obama orders very intensive bombing of Daesh convoys and assets moving toward Kobane, and that, in conjunction with the YPG and Peshmerga guerrillas on the ground, defeats the Daesh assault by late January of 2015.

But Secretary of Defense Ash Carter and Air Force Chief of Staff Gen. Mark A. Welsh have learned something important from Kobane. The Kurds can and will fight if you give them good aerial support, unlike much of the Iraqi army. The successful defense of Kobane gives them an idea. What if you could unite the Kurdish canton of Jazira in the northeast with the Kurdish canton of Kobane, using Kurdish fighters and allied air power? You’d have a solid band of Kurdish control all across northern Syria, depriving Daesh of its border checkpoint, Tel al-Abyad and strangling the movement of reinforcements and resupply from Turkey.

Meanwhile, pleas to Erdogan to use the Turkish military to cut off Daesh have fallen on deaf ears. Erdogan is furious about any strengthening of the Syrian Kurds on his border, but just seems mysteriously unconcerned about having Daesh on the same border. Some charge that he is anti-leftist but soft on Muslim radicalism. Some say that Daesh has cells inside Turkey and has threatened to destroy the country’s tourism industry if the Turkish government does not cooperate.

Obama, Carter and Welsh decide to go ahead with their plan, and let Erdogan suck on it, in late May and early June, to have YPG fighters (and maybe there were some Peshmerga who came over to help) take Tel al-Abyad and hook up with Kobane, cutting Daesh off. They are also careful to include some Sunni Arab auxiliaries, the “Euphrates Volcano” forces, which are presumably the far eastern kernel of a rebuilt Free Syrian Army covertly supported by the US. The plan succeeds!

So Erdogan is absolutely livid. He denounces this development as a future threat to Turkey, even though he had not denounced Daesh as such.

The obvious thing for Daesh to do now is establish a new smuggling route from the Turkish border behind Aleppo down to Raqqa. But that area east and north of Aleppo is controlled by the rebels of whom the US is suspicious of having Jihadi tendencies Army of Conquest (Jaysh al-Fath), a group of fundamentalist Sunni Arab militias closely allied with the Support Front (Jabhat al-Nusra), an al-Qaeda affiliate. So ISIL has to attack the other radical Sunni rebels, which it has done many times before. The US is in the awkward position of bombing Daesh in support of what it fears are radical fundamentalists allied with al-Qaeda. But Washington bites the bullet and does bomb Daesh, and the fundamentalist rebels chase it out of these northern positions in Aleppo province.

So President Obama goes back to Erdogan and says, I want Turkey to block Daesh from infiltrating Syria along the Turkish border from Azaz to Jarabulus, north of Aleppo and to either side. Otherwise we’ll use the Kurds again to accomplish this. We can’t be dependent on al-Qaeda linked forces like this.

The Turks really had not wanted to get involved militarily in Syria, though they were happy to let supplies and men through to the rebels, without inquiring too closely into who exactly the rebels were. But now there was a prospect of a new Syrian-Kurdish state, Rojava, bordering southeastern Turkey. And unlike Iraqi Kurdistan, this state would be ruled by a PKK branch or ally, evoking for Turkish leaders the horrors of the dirty war of the 1980s and 1990s when 30,000 died in eastern Anatolia. (I’m not saying that YPG is necessarily dangerous to Turkey in that way, only that Ankara fears it could whip up secessionist and far left sentiments in Turkey’s southeast).

So on Sunday Prime Minister Ahmet Davutoglu announces that Turkey will build a fence along its border with Turkey and might send troops in to secure a 25-mile strip on the Syrian side, as a buffer zone protecting Turkish territory from the fighting to its south.

Then the Turkish military uses its contacts in the more liberal Turkish press to deny any such invasion plan. 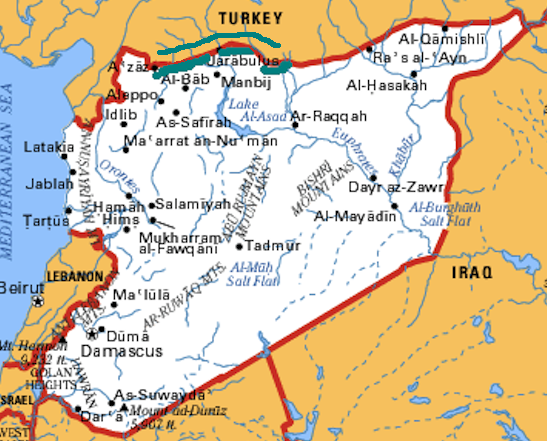 What do the Turkish chiefs of staff propose? They would station troops along the Syrian border between Jarabulus and Azaz, that is, behind Aleppo province, picking up the slack where the Kurdish line at Kobane ends. The would not go in and establish a buffer zone but would secure the border from infiltration and would use artillery and aerial bombardment against any guerrilla group, especially Daesh, that came into the 25-mile deep buffer zone. In short, they would create a DMZ with Daesh and other fundamentalist rebels to the south. This DMZ would have the effect of cutting Daesh off decisively from resupply via Turkey, since the Kurds hold the border territory from Kobane east to Jazira and the Turkish military holds it west from Kobane to Azaz. Likely if this is done, Daesh will be strangled even more quickly than would otherwise be the case, and Turkish-backed groups like Ahrar al-Sham will benefit (it is fundamentalist and tightly intertwined with al-Qaeda, but mainly focused on Idlib and Aleppo provinces).

Davutoglu and Erdogan clearly want the buffer zone to extend east along the border of Syrian Kurdistan (“Rojava”), but the generals appear to be pushing back on this idea.

The generals are using Hurriyet to signal that no new government has been cobbled together yet after the recent elections, and that Davutoglu therefore does not have the sort of popular mandate that would justify him going around invading other countries. They clearly also fear a backlash from Russia, China and Iran if they send troops into Syria with no UN Security Council resolution allowing the use of force in that country, and in the absence of an attack by Daesh on Turkey. That is why they propose a DMZ with artillery at the ready– if Daesh violates it by attacking Turkey, then they would be justified in using deadly force in self-defense.

Turkey has so far escaped most of the severe disruptions of the Syrian war, even though it has a long border with that country. Erdogan and Davutoglu are now bringing it into the fray as a belligerent, with possibly deadly consequences for social peace and its economy.

But it isn’t even clear what if anything will actually be attempted, given military reluctance and the lack of an actual government in Ankara. If anything of this nature is attempted, certainly it will change the dynamics in the region.

So that’s the story.