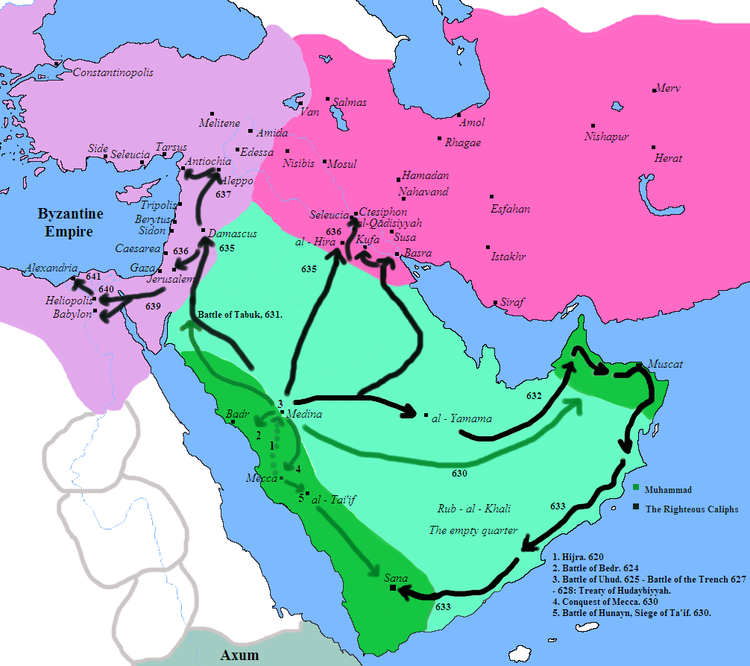 The discovery of a couple pages [apparently actually 18] of a very old Qur’an (the Muslim scripture), probably from the 640s CE [“AD”], in a library in Britain, has provoked a good deal of press reporting. Muslim tradition holds that the scripture was revealed to the Prophet Muhammad between roughly 610 CE and his death in 632, during the era when Heraclius was the emperor of Byzantium and the Tang Dynasty ruled China. While this find at the Cadbury Research Library at the University of Birmingham is important, the press seems unaware that a copy of the Qur’an that dates from the 640s and has about half of the entire book was discovered by a German team in Sanaa, Yemen two decades ago.

The oldest nearly complete Qur’ans in the world are just sitting there in the middle of Sanaa, and Birmingham is not the really big story here.

And Sanaa is being daily bombed from the air by Saudi Arabia, which has hit civilian buildings and a refugee camp and part of historic downtown Sanaa. I am petrified that it has hit the Manuscript Library where this precious book was held. (I am also petrified every time I hear about a strike that it has killed people– don’t get me wrong. But hey, I’m a historian of Islam so I worry about cultural destruction too).

Islam grew up in Western Arabia at a time when the capital of the old Roman empire had been moved east to Constantinople (today’s Istanbul) and when that eastern Roman or Byzantine Empire ruled much of the Middle East (what is now Turkey, Egypt, Palestine, Israel, Syria). The rest, Iraq and Iran, was ruled by the Zoroastrian, Persian Sasanid Empire. Islam grew up about six centuries after the beginning of Christianity, but only about 300 years after it had been officially recognized as one of the legitimate religions of the Roman Empire by Emperor Constantine.

The Great Mosque of Sanaa, Yemen, was founded by a companion of the Prophet Muhammad. In 1965 as a result of rain damage, an ancient storage room was discovered in its west wing that had had no door. It was full of old leaves of the Qur’an. Muslims were reluctant to throw copies of the Qur’an away when they aged, and the room was used as a geniza or storage for codex books that were falling apart. The story of this discovery is given here (click).

Yemen brought in a German team to reassemble whole copies of the Qur’an from the jumbled leaves. I visited the facility, part of the Sanaa Manuscript Library called the Dar al-Qur’an, in 1988. I was shown several hundred drawers, each representing a different copy of the Muslim scripture, with different dimensions and script and media (lambskin, papyrus, etc.) Each page was being matched to the specifications of one of the drawers. I was told by the German staff that they were sure that some of these copies of the Qur’an went back to at least the late 600s, i.e. the first half of the Umayyad period (661-750), though there was at that time no absolute proof. It was just that the block Kufi script and the papyrus medium suggested ancientness.

This was an exciting idea to me, since at that time a lot of skepticism had been raised by John Wansbrough, Michael Cook, and Patricia Crone about whether the Qur’an as a book was really assembled 610-632, or whether it evolved over a couple of centuries. There was nothing wrong in principle with their theory– it was just an application of Descartes’ method, of radical doubt. And at that time the history of the Qur’anic manuscript text as a discipline barely existed (it is still very undeveloped compared to e.g. biblical studies). These authors turn out to have been wrong, but this is how science progresses, by people making bold hypotheses and then seeing if they can be knocked down.

Some of the manuscripts in the Dar al-Qur’an were very old and weren’t showing significant variants from modern Qur’ans, showing that the text had not in fact changed after the late 600s.

What the German team did not know then was that one of the copies of the Qur’an they had found was a palimpsest. That is a manuscript that has been written over and so replaced with a later text. But nowadays ultraviolet photography can reveal the original manuscript underneath. 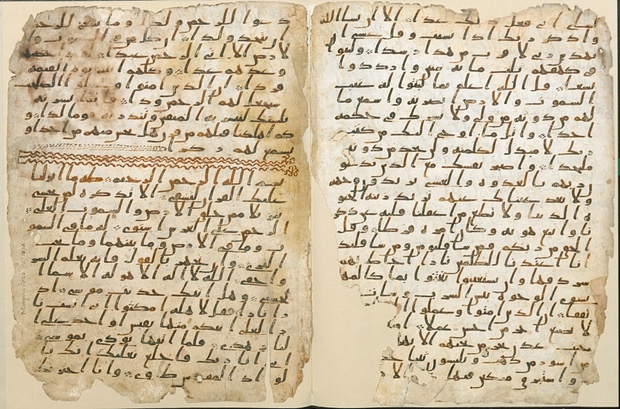 The original manuscript was the Qur’an, but it wasn’t in the order prescribed by the Caliph Uthman (r. 644-656). That Caliph had issued an official version of the Qur’an in manuscript and had it copied out and spread around. It arranged the chapters (surahs) in order of length, with the longest first. This way of doing it meant that the book was more or less arranged backward from a chronological point of view, since the earliest chapters tended to be shorter than later ones. Westerners trying to read the Qur’an should thus begin at the back and read forward, and should read it along with a good biography of the Prophet Muhammad for context (I’ve always liked Montgomery Watts’ “Muhammad Prophet and Statesman”).

So the palimpsest Qur’an was likely older than 650 CE when `Uthman’s official version was promulgated. Later on, radiocarbon dating showed a high likelihood that this book was at least as old as the 640s and so certainly the oldest Qur’an known to exist, going back to within a decade of the Prophet Muhammad’s death. By the way, although the order of the chapters is different from the later standard, the text itself doesn’t show significant variants from today’s Qur’an. It shows that the religion of Islam has a firm grounding in history.

The earliest fragment of the New Testament in manuscript is from 125 CE and full manuscripts are later. So we now have (most of) a Qur’an that is within a decade or two of the death of the Muslim prophet, something that cannot be said for Christianity. I suspect we’ll eventually find very old New Testaments, too. I’m just underlining the historical importance of the Yemen find.

The discovery has been analyzed and published by Behnam Sadeghi of Stanford and Mohsen Goudarzi, though apparently a Yemen MA thesis found about 40 pages of which they were unaware.

I can’t understand why the palimpsest Qur’an isn’t more famous or the work of Sadeghi and Goudarzi not better known. Even in Middle East studies circles, whenever I have brought the Yemen finds up with colleagues, they often seem surprised and hadn’t known about them. And, the flurry of reporting about the Birmingham 2 pages also seems not to know about the Yemeni texts.

Let’s hope the fruitless war in Yemen (you can’t defeat a guerrilla movement with aerial bombardment) ends as soon as possible, and that civilians can stop being endangered, and Yemen’s vast cultural treasures can be safeguarded from further destruction. Since Bush went into Iraq in 2003, Middle Eastern history is disappearing, in what I call Cliocide, even as the security and lives of people are being lost. People need history and identity and it is a crime to rob them of it. The Saudis take pride in being the guardians of the two holy shrines, Mecca and Medina. They should be guardians of the Qur’an, too, and stop hitting Sanaa.