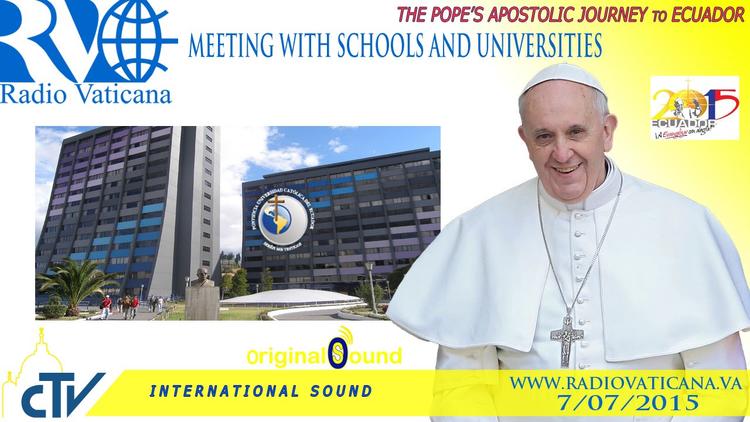 Pope Francis continues to preach environmentalism as he addresses crowds in Latin America, a challenging message in poor countries where over-exploitation of natural resources is a constant temptation. These are also countries and populations, however, most at risk from pollution and the ravages of climate change.

Pope Francis’s proof text when he spoke at the Catholic University in Quito was Genesis 15: “The LORD God took the man and put him in the garden of Eden to till it and keep it.” Francis underlined that there are two commandments here– human beings are to till the garden, i.e. to shape their physical and spiritual environment. But, less stressed in the Western tradition, he said, is the second commandment, to “keep” or “guard” the garden.

The garden (i.e. nature), he said, is a gift, something bestowed upon us. But it is not a static gift, meant solely to mirror the divine. It is a sphere in which humans are meant to share with the divine in constructing it. Nor is nature the only consideration here– we are also keepers or guardians of each other. That was the error Cain made when he was asked where Abel was, whom he had killed, and he said, “Am I my brother’s keeper?”

Genesis clearly envisaged human beings as keepers or guardians, both of the natural world and of one another.

Francis pointed to the intellectual and technological potential of the university to fulfill this double charge of guardianship, and he praised the role of the youth in fulfilling it. But he stressed that abstract ideas are not enough– we must turn, he said to the concrete.

He slammed a purely technocratic approach to nature and society, based purely on power and utility. He warned that the good and the truth do not sprout spontaneously from technological and economic power. He urged them to consider urgently the issues of “tilling” and “keeping” our natural resources. He admitted the benefits of individual initiatives, but said in the end we are called to consider the whole and not just the fragments, and to include everyone in our progress. There is, he said, no right of exclusion. We have to be able to answer the question, “Where is your brother?”

Although Pope Francis was speaking somewhat abstractly here, Ecuador’s poor and its indigenous Quechua people took it that he was speaking at least partly about their marginalization.

Given the pope’s encyclical on climate change and the need to move quickly away from hydrocarbons, his message is somewhat challenging for a poor country with a growing oil industry.

But the consequences of not moving quickly away from hydrocarbons for this country could be devastating. Ecuador could well face a water crisis a its glacier coverage declines because of global warming:

“Between 1996 and 2008, for example, Ecuador’s glacier coverage went down by 28%. Cotopaxi, one of the most active volcanoes in the world—and one of the main sources of water for the Ecuadorian capital of Quito—saw a 30% reduction in glacier coverage between 1976 and 1997.

Empresa Eléctrica Quito, in turn, confirmed that the amount of water available to the capital was reduced by 50% between 1978 and 2008. Between 2050 and 2100 we expect glaciers to retreat at least 55% in the Andes in tandem with an increase in temperature between 2 and 8°C in the Amazon region.”

Communities of the [pdf] Jubones river basin in the south of Ecuador are the most vulnerable to the effects of climate change. Many also feel that artificial fertilizers have caused environmental damage and are returning to composting in the traditional way. These are among the communities that Pope Francis was sticking up for.

Despite its oil industry, Ecuador has a very low carbon footprint and nearly 60 percent of its energy is generated by renewables, mainly hydro. It is also, however, moving ahead with wind and solar installations, being rich in both energy sources. It may be that the young engineers and entrepreneurs at Catholic University will take away from the pope’s message a new urgency in implementing a renewable energy revolution in the country.

Vatican: “Pope Francis in Ecuador – Meeting with representatives of schools and universities”