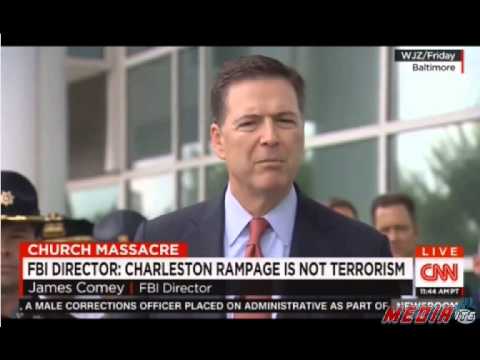 Well before the advent of the US “War on Terror,” Edward Said wrote: “As a word and concept, ‘terrorism’ has acquired an extraordinary status in American public discourse.” Among other things, Said observed the ways in which “terrorism” functioned to deflect attention away from America’s misdeeds and demonize a racialized enemy of “Arabs and Moslems” who “have terrorism in their genes.”

Some things, unfortunately, are not new. Although, in 1988, “terrorism” was openly tied to Communism by US politicians and pundits, while today it is indelibly linked with Islam and Islamic “fundamentalism,” the use of the term “terrorism” to name people and actions opposed to US imperialism remains unchanged.

Terrorism has taken on renewed significance in the United States in the wake of Dylann Roof’s murder of nine African American churchgoers engaged in Bible study in Charleston, South Carolina. Many in the US have argued that Roof’s actions should be classified as a terrorist attack.

After all, Roof did what we did, in his words, to ignite a “race war.” He authored a racist manifesto and saw his killing spree as a proactive measure to prevent black people from taking over America. According to witness testimony, he purposefully left one person alive so she could report what had happened to others as a warning.

And, according to the FBI, “domestic terrorism” includes any illegal activity occurring within the territorial U.S. that endangers human life and is intended to “intimidate or coerce a civilian population” or the government. So it seems like the shoe fits.

However, the question of who or what is “terrorist” has never been merely an empirical question in the U.S. It has always been a deeply ideological and political question, one inextricably influenced by Israeli politicians and interests.

Today’s exceedingly narrow and ideological view of terrorism as political violence committed by Arabs and Muslims, so common as to no longer merit either comment or controversy, did not begin with 9/11, even if its most recently famous incarnation was George W. Bush’s embarrassing and frequently ungrammatical condemnations of what he once called “Islamo-fascism.”

Bush’s fake notion of “Islamo-fascism” is actually a cipher into the history of terrorism and terrorism discourse in the United States, which has its roots in post-WWII condemnations of totalitarianism and, later, the Soviet Union, both of which were characterized as monstrous threats to “civilization” and modern, Western democracy. Conflating the Nazis with Stalin, “totalitarianism” became a convenient catchword for naming everything that stood opposed to the nobility and rightness of the American way. Later, as Reagan made famous, the Soviet Union’s “Evil Empire” was the enemy to be conquered.

The breakup of the Soviet bloc and the fall of the Berlin Wall, however, left the US without an evil enemy to vanquish. This is when “terrorism” really comes into its own. Thanks in large part to ongoing agitation from Israeli powerbrokers—Benjamin Netanyahu in particular, whose many books on the subject and relentless, longstanding manufacture and pursuit of Muslim terror Said calls “obsessive”—a new international evil enemy was forged: the Muslim terrorist.

Concomitant with the advent of plane hijacking as a political stunt to gain attention for the Palestinian liberation struggle, the US and Israel found an ideological lever by which to manufacture their alliance as a civilization under attack: the backward savagery of Muslim terrorism.

Perhaps unsurprisingly, then, the figure of the terrorist is not only irretrievably Arab and Muslim in US discourse, but also originally Palestinian, just as the Palestinian hijacker or suicide bomber is the figure of terrorism par excellence in the Israeli imaginary. The specifically Palestinian character of “Muslim terrorism” reveals the Israeli influence on US policy and indicates the two countries’ shared imperial project.

This background helps explain why Dylann Roof is not a terrorist but Palestinian resistance is, regardless of official state definitions or discourse.

For example, even before he knew the full facts of the case, FBI Director James Comey declared that Roof’s actions were not terrorism because they were not a “political act.”

By contrast, we know that simply being Palestinian is a “political act” and that, for example, Palestinians in Gaza are always-already guilty, always-already terrorists, regardless of what they do or don’t do or where they go or don’t go, which is why they merit intermittent and wanton acts of massacre and destruction, as well as brutal ongoing siege.

Indeed, Palestinians are by definition “political” in this sense insofar as they refuse to die, move away, or simply disappear from the land entirely. Their very existence renders them terrorists, for their steadfastness, or sumud, thwarts the Israeli program of complete takeover of everything that lies between the Jordan and the Mediterranean.

Rather than an empirical category of demarcatable political violence, then, “terrorism” in US and Israeli usage must be understood as a name for the violence committed by those who are more properly understood as its objects.

Political violence committed against the enemies of America and Israel is not terrorism but self-defense. Political violence committed by enemies of America and Israel, on the other hand, is terrorism. (In the case of African Americans, it is thuggery – and placing the “thug” side by side with the “terrorist” makes clear the racialized population control that is the real purpose of the US criminal legal system.)

This is why Comey cannot see Roof as a terrorist and why there can never be any legitimate form of Palestinian resistance. According to the moralized dictates of US-Israeli imperial discourse, African Americans and Palestinians are thugs and terrorists, savage and violent by nature, those against whom violence is always justifiable, if not vital, to the survival of “civilization.”

Because Black lives do not, in fact, matter, attacks on them do not constitute terrorism, but rather longstanding practice and official US policy. Meanwhile, because Palestinian steadfastness does, indeed, constitute a threat to Israeli expansion and colonization, their existence will inevitably be understood as terrorism as a matter of course.

Let’s be clear, then: “terrorism” is a keyword of empire that demarcates Islamicized enemies of US and Israeli imperial policy, whether foreign or domestic, just as “thug” demarcates racialized Black enemies of the US domestic order.

Let’s also be clear, then, regarding the stakes of being Palestinian and of standing in solidarity with Palestine: it means being an enemy of the civilizational order that understands black people as worthless and Palestinians as hindrances, vermin, and avatars of mindless violence.

We should, therefore, neither embrace the terrorist label for people like Roof nor fear it when it is applied to ourselves and our allies. “Terrorism” is a name for those people and actions that oppose the dictates of the US/Israeli global order. On this one-year anniversary of Israel’s 2014 genocidal attack on Gaza, let’s be unafraid to make clear that is exactly where we stand.

Heike Schotten is Associate Professor of Political Science at the University of Massachusetts Boston, where she teaches political theory, feminist theory, and queer theory (her work is available here). She is a member of the USACBI organizing collective and has been active in the Palestine solidarity movement since 2006.