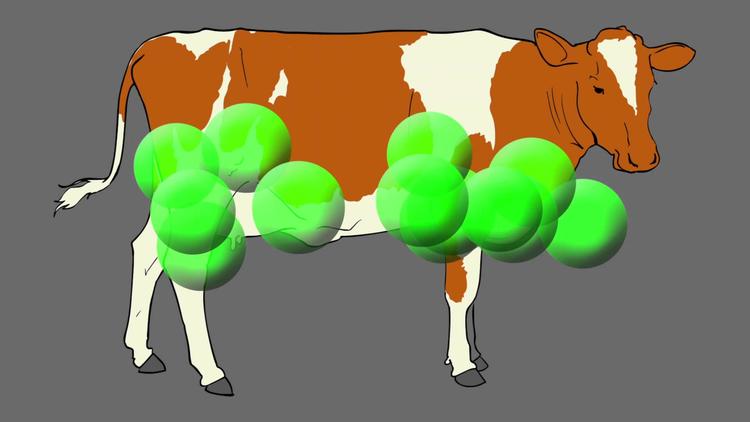 By Dora Marinova and Talia Raphaely | (The Conversation) | – –

Climate change is the greatest challenge to human health, according to the recent Lancet Commission report which calls for action to protect the global population. The report says that tackling climate change could deliver huge public health benefits, largely through phasing out coal, embracing renewable energy, and moving to a low-carbon economy. There is however one crucial issue the report fails to address: meat.

The commission’s recommendations are all based on solid evidence about the link between greenhouse gas emissions, global warming and human health. Focusing only on energy policy, however, will not be enough to head off climate change successfully. Calls for action that do not include reduction in the world’s livestock production and meat consumption will not be able to protect public health from the effects of climate change.

The livestock industry does not just generate carbon dioxide – it adds to the full spectrum of major greenhouse gases. It is the primary (and growing) source of methane and nitrous oxide – gases estimated to have 84 and 264 times respectively the global warming potential of CO2 on a 20-year horizon (see page 87 here).

On the positive side, however, methane dissipates the most rapidly of all greenhouse gases, and so changing what we eat would have an also immediate effect on climate change. Moving away from meat would also help farmers to use nitrogen more efficiently, which would have the dual impact of causing less pollution while also helping people get more nutrition from the foods they grow.

Not just about animal welfare

Since the 1970s, meat has been seen as problematic from an animal welfare perspective. In recent decades however it has transformed into environmental concerns, as we realise the huge and unprecedented future impacts of meat consumption on the climate.

The meat issue also now includes questions about international food security, which will become more of a challenge given the impending damage to ecosystem services and the fact that meat is an inefficient way to produce calories anyway. Concerns about dependency, distribution and corruption in food supply are justified, but in a world facing rapid global climate change with increasingly stressed ecosystems and a growing human population, the rationale for eating less meat is clear.

This is just as true in export markets, such as Australia’s sales to China, as it is for domestic consumption. Livestock, like mining, is an industry in which Australia is “offshoring” large amounts of greenhouse emissions.

Meat and health: a tricky question

Perhaps the reason the Lancet Commission chose to stay away from the meat issue is because there is not a straightforward, universal relationship between meat and health. Levels of animal protein intake vary significantly across the globe. In poor countries such as Chad or Bangladesh, eating meat might be a question of survival. Meanwhile people in the developed world, including Australians, are consuming meat far beyond healthy levels. Australia’s dietary guidelines suggest limiting red meat intake to 455g per week (65g per day) to reduce cancer and cardiovascular risk, but Australians eat 42% more than this, and yet more meat is produced but wasted.

While the Food and Agriculture Organization rightly says that people should “have access to a diverse range of nutritious foods and to the knowledge and information … to make healthy choices”, many people still choose cheap, meat-based options that increase the burden on both ecosystems and health systems.

Few people consciously consider the planetary impact of the meat products they eat. The evidence however is clear: Earth cannot continue to support a population of 7 billion people and the 70 billion animals they raise and slaughter each year for food. At the moment the problem is getting worse, not better: meat consumption is growing faster than the overall population.

Whether or not one cares about one’s own personal health and well-being, achieving long-term population health and stabilising climate change require serious reduction in global meat consumption. As ever, the biggest potential for change is among those who can most afford it and are most responsible for the current problem. Cutting down on meat is where the best public health opportunity lies in relation to climate change.

Dora Marinova is Professor of Sustainability at Curtin University