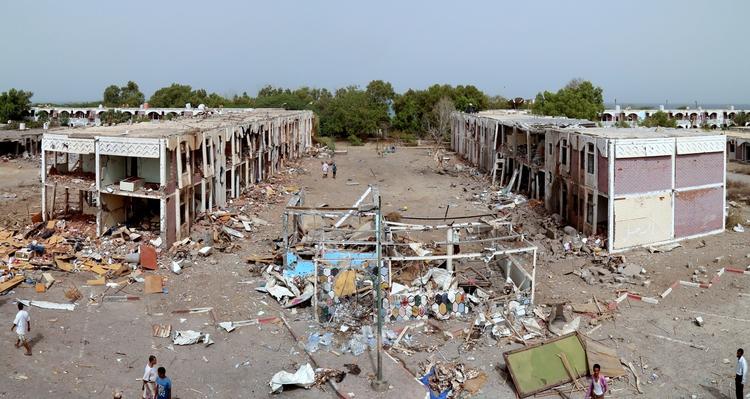 (Sanaa) – Saudi-led coalition airstrikes that killed at least 65 civilians, including 10 children, and wounded dozens in the Yemeni port city of Mokha on July 24, 2015, are an apparent war crime. Starting between 9:30 and 10 p.m., coalition airplanes repeatedly struck two residential compounds of the Mokha Steam Power Plant, which housed plant workers and their family members.

The failure of Saudi Arabia and other coalition members to investigate apparently unlawful airstrikes in Yemen demonstrates the need for the United Nations Human Rights Council to create a commission of inquiry to investigate allegations of laws-of-war violations by the coalition, the Houthis, and other parties to the conflict, Human Rights Watch said.

Saudi-led coalition airstrikes that killed at least 65 civilians, including 10 children, and wounded dozens in the Yemeni port city of Mokha on July 24, 2015, are an apparent war crime.

Human Rights Watch visited the area of the attack a day-and-a-half later. Craters and building damage showed that six bombs had struck the plant’s main residential compound, which housed at least 200 families, according to the plant’s managers. One bomb had struck a separate compound for short-term workers about a kilometer north of the main compound, destroying the water tank for the compounds, and two bombs had struck the beach and an intersection nearby.

Bombs hit two apartment buildings directly, collapsing part of their roofs. Other bombs exploded between the buildings, including in the main courtyard, stripping the exterior walls off dozens of apartments, leaving only the load-bearing pillars standing.

Workers and residents at the compounds told Human Rights Watch that one or more aircraft dropped nine bombs in separate sorties in intervals of a few minutes. All of the bombs appeared intended for the compounds and not another objective.

Human Rights Watch saw no signs that either of the two residential compounds for the power plants were being used for military purposes. Over a dozen workers and residents said that there had been no Houthi or other military forces at the compounds. The power plant and the compound were built in 1986.

Early in the morning of July 25, a news ticker on Al-Arabiya TV, a Saudi-owned media outlet, reported that coalition forces had attacked a military air defense base in Mokha. Human Rights Watch identified a military facility about 800 meters southeast of the Mokha Steam Power Plant’s main compound, which plant workers said had been a military air defense base. The plant workers said that it had been empty for months, and Human Rights Watch saw no activity or personnel at the base from the outside, except for two guards.

Bagil Jafar Qasim, director general of the plant, provided Human Rights Watch with a list of 65 people killed in the attack, including 10 children. The list included two people still missing, whom Qasim believed were buried under the rubble and probably dead. Human Rights Watch visited three hospitals in Hodaida that had received 42 wounded from the attack. Several, including an 11-year-old girl, were in critical condition.

Wajida Ahmed Najid, 37, a resident in one of the compounds whose husband is a plant employee, said that when the first strike hit, she grabbed her children close and they huddled together hoping the danger would pass:

After the third strike the entire building began to collapse on top of us. Then I knew we needed to leave because it was not safe to stay. I grabbed my girls and we started running in the direction of the beach, but as we were running pieces of metal were flying everywhere and one hit Malak, my 9-year-old daughter. Thank God she is going to be okay. While we were running I saw bodies, seven of them, just lying on the ground, in pieces.

A doctor at the hospital told Human Rights Watch that they had removed a metal fragment from Malak’s abdomen.

Khalil Abdullah Aidrus, 35, a nurse at the plant’s clinic, said that he rushed to al-Salam clinic in Mokha city when he heard news of the attack. There, he and other medics administered basic first aid, then sent the wounded on to hospitals in Hodaida. He said that within an hour of the airstrikes they had received at least 30 wounded and 8 bodies. At 1 a.m., he went to the main compound:

As I walked through the gates I saw my friend, an engineer at the plant, Abdu Samid al-Subaie. He was lying on the ground, just outside his apartment. He had a deep gash to his waist and he was bleeding to death as his two children lay at his side screaming and crying. But it was hopeless. At the same time the airplanes were still buzzing above us. We could hear them for hours afterwards.

Loai Nabeel, 20, who works at a shop in the compound, said he rushed to his family’s apartment when the attack started. A second bomb hit the apartment before he got there, collapsing the roof. He found his mother and younger brother by the entrance and brought them to the beach before he went back to search for his sisters Hadeel, 12, and Taghreed, 17:

It was dark. It took me 10 minutes to find Hadeel under the rubble. The bomb hit the roof of the room where she was sleeping and her head was seriously wounded. I found Taghreed in another room with minor injuries to her head. Hadeel is still in a coma.

The ongoing hostilities in Yemen and Saudi Arabia are governed by international humanitarian law, or the laws of war. The laws of war prohibit deliberate attacks on civilians and indiscriminate attacks, which are attacks that strike military objectives and civilians or civilian objects without distinction. Attacks that are not directed at a specific military objective are considered indiscriminate.

Individuals who commit serious violations of the laws of war with criminal intent – that is, deliberately or recklessly – may be prosecuted for war crimes. They also may be held criminally liable for attempting to commit a war crime, as well as assisting in, facilitating, aiding, or abetting a war crime. Governments that are parties to an armed conflict are obligated to investigate alleged war crimes by members of their armed forces.

The United States is not a member of the coalition but has stated that it is providing the coalition with logistics and intelligence support. The United Kingdom has also said that it is “providing technical support, precision-guided weapons and exchanging information with the Saudi Arabian armed forces through pre-existing arrangements.” Providing direct support to military operations, such as information on targets, would make the US and the UK parties to the armed conflict, and bound to apply the laws of war.

Coalition airstrikes have struck Houthi targets in the capital, Sanaa, and other cities, including Saada, Hodaida, Taiz, Ibb, Lahj, al-Dale`a, Shabwa, Marib, Hajja, and Aden. Many of these attacks have killed and injured civilians. As of July 21, the fighting in Yemen had resulted in at least 1,693 civilian deaths, the majority from airstrikes, according to the UN Office of the High Commissioner for Human Rights.

Human Rights Watch has investigated a number of airstrikes that appeared to be unlawful. For instance, warplanes dropped multiple aerial bombs on a dairy factory in the port of Hodaida on March 31, killing at least 31 civilians. The factory was near two military bases that were later hit.

The Houthis and other forces have also been responsible for laws-of-war violations, Human Rights Watch said. Pro-Houthi forces and opposition militias have engaged in military operations around Aden, Taiz, and other areas that have repeatedly put civilians and civilian structures such as hospitals at unnecessary risk.

The high commissioner for human rights has expressed grave concern at the high number of civilian casualties in Yemen and called for urgent and thorough investigations. The UN Human Rights Council should pass a resolution establishing an international commission of inquiry to investigate all alleged violations of international humanitarian law since the current armed conflict in Yemen began.

“Again and again, we see coalition airstrikes killing large numbers of civilians, but no signs of any investigation into possible violations,” Solvang said. “If coalition members won’t investigate, the UN should.”