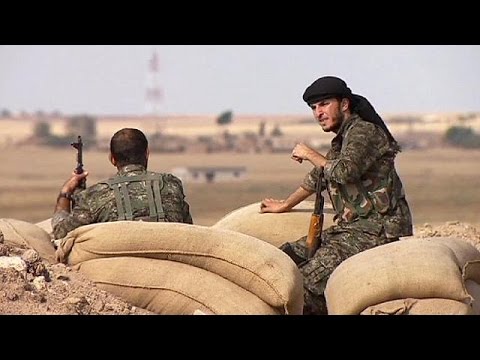 UPDATE ON TUESDAY JULY 28: Turkish President Recep Tayyip Erdogan said on Tuesday that Ankara could not continue the peace process with the Kurds amid continuing attacks against Turkish targets.

As Turkish and U.S. officials reportedly worked on a plan to create a safe-zone by sweeping Islamic State militants from a section of northern Syria along the Turkish border, Turkey opened up a second front — on Kurdish rebel (PKK) sites — over the weekend. NATO ambassadors will meet Tuesday, at Turkey’s request, to address the spike in violence among Turkey, ISIS and the PKK.

Turkish Prime Minister Ahmet Davutoğlu declared, over the weekend, that a “new process: (süreç) has started. The old “process: was a peace process with the Kurdistan Worker’s Party (PKK).

The weekend airstrikes followed the killing of two Turkish policemen by PKK militants last week. The PKK claimed responsibility for the revenge killing; they blamed lax Turkish security measures for an ISIS suicide bombing of leftist youth activists last week in the Kurdish town of Suruc.

It was Turkey’s first aerial raid in northern Iraq against the PKK since Turkey embarked on peace talks with PKK leader Abdullah Öcalan (serving a life sentence in a Turkish prison); throwing into doubt a fragile ceasefire between Kurdish separatists and Turkey in place since 2013. In addition to conducting raids on ISIS and Kurdish targets, Turkey has also detained several hundred suspected IS and PKK militants and other extremists inside the country.

Turkey has become increasingly concerned that gains made by Kurds in Iraq and in Syria could encourage its own Kurdish minority to seek independence. Kurdish rebels released a statement on July 25, 2015 following the airstrikes that the conditions for observing the truce had been “eliminated”. The PKK’s military wing, the HPG, denounced this “aggression of war” by Turkey and vowed “resistance”. It described the bombings in northern Iraq as the “most serious military and political error” by Erdogan and his ruling Justice and Development Party.

In response to Turkish attacks on PKK targets, the White House said on July 25, 2015 that Turkey has the right to defend itself against terror attacks. National Security Council spokesman Alistair Baskey strongly condemned the recent terrorist attacks by the PKK, and said the organization should renounce terrorism and resume talks with Ankara. Pentagon spokesman Maj. James Brindle urged “de-escalation by both sides and encourage[d] everyone to remain committed to the peaceful ‘solution process’ to bring about a just and sustainable peace for all Turkish citizens.”

NATO and the EU have also reaffirmed Turkey’s right to defend itself against ‘terror attacks’ while insisting that measures taken by Ankara should be “proportionate.”

“As PKK-affiliate Syrian Kurdish Militia PYD/YPG is allied with the West in its fight against IS, I do not think that NATO will give up on its natural ally, the Kurds — the only moderate and pro-Western force in both Syria and Iraq,” said Kubilay Yado Arin, a Kurdish scholar at Duke University’s Middle East Studies Center, in a discussion with ISLAMiCommentary. “Turkey’s Western partners have encouraged Turkey to continue the peace talks, as they expect the PKK to renounce violence.”

“Turkey’s offensive against the PKK hampers the U.S.-led fight against the Islamic State,” he explained. “The U.S. has relied on Syrian Kurdish fighters affiliated with the PKK in making gains against ISIS.”

Turkey’s pro-Kurdish party, the People’s Democratic Party (HDP) said the strikes ended the two-year-old truce, and the party as called on the AKP to stop the bombing campaign and resume a dialogue with the Kurds.

This came as The New York Times reported today that “Turkey and the United States have agreed in general terms on a plan that envisions American warplanes, Syrian insurgents and Turkish forces working together to sweep Islamic State militants from a 60-mile-long strip of northern Syria along the Turkish border, American and Turkish officials say.”

“If there’s in fact an international agreement to establish an ISIS-free safe zone in Syria, as a haven for those fleeing the fighting, Turkish President Erdoğan has signaled a decisive shift in Ankara’s traditional position by declaring that Turkish troops could be used to help set up that zone,” said Arin. “Under the Saddam Hussein regime in Iraq, neither the no-fly zone nor the buffer zones in the north and the south of that country protected the Kurds and the Shi’ites from Saddam’s ground troops. Turkey fears that the PYD (Syran Kurdish militia) might conquer the whole territory along the Turkish-Syrian border to connect and enlarge all Kurdish-populated areas. In establishing a security zone, Ankara inhibits a Kurdish-controlled ‘corridor’ in the border region. A corridor would also prevent the establishment of an autonomous Rojava (Syrian Kurdistan) under PYD rule which Turkish officials see connected to the PKK, its own enemy.”

“The need for political compromise to solve Turkey’s long festering Kurdish issue has never been more pressing for the ruling party and the opposition pro-Kurdish People’s Democratic Party (HDP),” he said.

Kubilay Yado Arin is a Visiting Scholar at Duke University’s Middle East Studies Center (July 2015 – June 2016). A Kurdish scholar, his research focuses on conservative think tanks in the US and Turkey, US-Turkish relations, EU and US foreign policy towards the Middle East. Previously he was a Visiting Scholar at Middle East Technical University and Portland State University (PSU). In January and February 2015 he started postdoctoral research on his current book project “Think Tanks in Turkish Foreign Policy” at UC Berkeley and at PSU, which he plans to continue at Duke’s Middle East Studies Center. This year I.B. Tauris will publish his book on “Turkey, the US and the EU: The New Foreign policies.” If interested in these and other of his publications, visit his website.

Euronews: “Why is Turkey taking on Kurdish and Islamic State militants?”