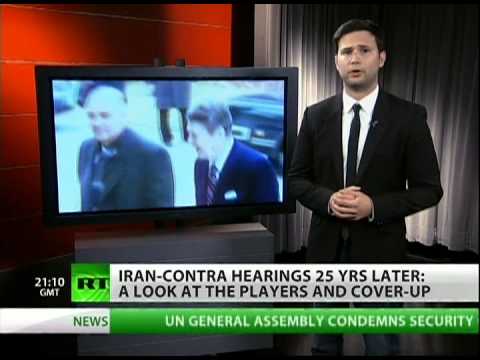 The Reagan administration in the 1980s was buffeted by two policy drives toward Iran. On the one hand, Reagan ally Saudi Arabia supported Iraq, which illegally launched a war on the Islamic Republic of Iran in 1980 in order to steal its oil-rich Khuzistan Province. Reagan in 1983 sent Donald Rumsfeld, then CEO of Searle pharmaceuticals, to make friends with Saddam Hussein in Iraq.

From the other side, a section of the Israeli security establishment wanted Reagan to side with Iran against Iraq and to provide Iran weaponry. Before the 1979 Islamic Revolution, Iran had been a major supplier of petroleum to Israel, which was boycotted by the Arab League (Iran is not an Arab country). Israel feared Iraq more than it did non-Arab Iran in that decade. After the 1979 revolution, Ayatollah Ruhollah Khomeini began denouncing Israel and saying he hoped it would vanish from the arena of time. But Iran was at war with Iraq and had mainly American weapons systems, for which it needed spare parts. The US was boycotting Iran, but Israel had reverse-engineered US spare parts and was manufacturing them, and was happy to trade them to Iran in return for petroleum. The Ayatollahs quietly made the deal, since without spare parts their tanks and armored vehicles and F-14s were so much junk.

While these two points of view were duking it out in Washington, Reagan had two other problems in the 1980s. One was that the Israelis militarily occupied southern Lebanon from 1982. This occupation gradually angered the Lebanese Shiite Muslims who predominate in the south and east of the country and in the urban district of east Beirut. They formed radical guerrilla groups to fight the occupation. As part of this pushback against Israeli grabbiness, the radical Shiites began taking Americans in Beirut captive. The captured Americans, who came on US screens in video clips begging for their lives,

The other problem was that Reagan wanted to roll back leftist movements in Nicaragua and El Salvador. In Nicaragua the Sandinista leftists came to power. Reagan wanted to support right wing death squads known as contras. In 1982, however, the Congress enacted the Boland Amendment, which forbade Reagan to spend US government money on right wing militias in Central America.

Reagan and the people around him, possibly including George H. W. Bush, the vice president, came up with a clever but completely illegal and unconstitutional joint solution to all these problems.

Reagan offered Iraq some naval and other support in its war on Iran, and ran interference for Baghdad at the UN Security Council when there was a danger that the UNSC might condemn Iraq for using chemical weapons on Iranian troops at the front.

At the same time, to prolong the war and make sure no regional power obtained an absolute victory, Reagan shared satellite photos of Iraqi positions with Iran. On the advice of Israeli official David Kimche, he sent his national security adviser Bud McFarlane to try to establish relations with Khomenei and with then Speaker of Parliament Akbar Rafsanjani. McFarlane brought a Bible and a cake in the shape of a key to symbolize Reagan’s hope of opening Iran.

Then Reagan had his people steal hundreds of T.O.W. anti-tank missiles from the Pentagon warehouses and illegally ship them to Khomeini’s Iran, then on the US terrorist watch-list.

Let me just underline this. Reagan was prevented by law from selling US weaponry to Iran, and certainly without notifying Congress under the Arms Export Act. There was no aboveboard, legitimate way to do this. So he just had his people pilfer expensive weaponry and ship it to Iran. A notorious Israeli arms dealer was the intermediary.

Note, too, just for the annals of perfidy, that Reagan was at the same time militarily supporting Iraq, and had told Baghdad they were his allies.

Reagan, being a fiscal conservative, made Khomeini pay for the weaponry. Reagan then put that money in secret Swiss bank accounts and gradually sent it to the Nicaragua right wing death squads. That was how he got around the Boland Amendment. He didn’t use US government money for this purpose. It was Khomeini’s money.

In return for the American weapons, Iran agreed to pressure the Lebanese Shiites to let US hostages go, solving a PR problem for the US Republican Party.

This complicated set of unconstitutional dealings came out in 1986. Reagan denied knowing or remembering much about it. At the time I thought he was lying, but we now know he had Alzheimers. Maybe he really didn’t remember it all and it was mainly the work of those around him. George H. W. Bush skated. A few lower level officials like Oliver North were hung out to dry. North was later given his own television show in Fox by Rupert Murdoch as a reward, I suppose, for arming Khomeini. Eliot Abrams, who was involved in Iran-Contra, was castigated by Congress for lying to it. Years later W. put him in the National Security Council, where he torpedoed US policy in support of a Palestinian state. He should be in jail.

A lot of documents for the scandal are available at the National Security Archive at GWU.

The Democrats decided it would be bad politics to impeach Reagan over having shredded the constitution into confetti. They were rewarded by the Republicans less than a decade latter with the Clinton impeachment, over matters of rather less moment than Reagan had been guilty of.

Ever after, we have had to hear Republicans preach to us how great Reagan, one of the most criminal presidents to hold office, was.

The deal reached by President Obama and the rest of the permanent members of the UN Security Council plus Germany in Vienna appears to remove after 5 years a conventional arms embargo imposed on Iran in 2007. We will hear a lot of squawking from Reagan-worshiping Republicans about this provision. We won’t hear that Reagan illegally sold Khomeini weapons. Wouldn’t that be worse than negotiating a legal end to an international arms embargo?

There was never any accountability for the constitutional coup conducted by Reagan and his people. Most continued to be powerful in Washington. In the period 2003-2008 when non-political appointees in the US government in Washington or think tanks wanted to bring me in for my expertise and advise on how to get out of the al-Qaeda and Iraq messes, Bob McFarlane and Eliot Abrams had me blackballed where they could.

So, we may conclude that Reagan tried to open Iran, but did it all wrong, not to mention unconstitutionally. President Obama will get credit for that opening in history. And ignoramuses on the Hill will shout at him that he should be more like Reagan.