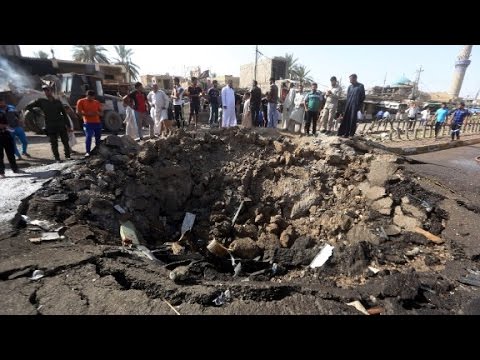 Last week the Iraqi government announced that it would be commencing operations to retake Ramadi, the capital of the vast western province of Anbar from ISIL (also called ISIS and Daesh). This represents the Shiite-dominated government’s first attempt to roll back the hybrid terrorist-army in Iraq’s Sunni-inhabited west. The Abadi government in Baghdad has much staked on this campaign that will be fought to large extent by Shiite popular mobilization militias. The campaign is thus fraught with the potential for revenge killings as has happened to the north when these Iranian-backed militias conquered Tikrit. Recent history shows that it is Iraq’s deep sectarian cleavages that have enabled ISIL to gather followers among Sunnis who have been disenfranchised by the US invasion and the anti-Sunni policies of Prime Minister Abadi’s predecessor, Maliki. This operation could thus potentially backfire if the Shiite militias bring a sectarian edge to their operations. A background journey into the history of this underpinning sectarian tension provides the missing context to upcoming military operations in Anbar and the remarkable rise of ISIL in Iraq’s western deserts.

A History of the Rise of ISIL.

Last June when an ISIL army of 7,000 Sunni fighters stormed north and conquered Mosul, Iraq’s second largest city, and much of northern Iraq, it appeared to many as if the terrorists had come out of the blue. But for those watching Iraq and Syria closely over the last few years it seemed almost destined to happen. In fact there were several steps taken by the Syrian, Iraqi and American governments that led to the rise of this terroristic Sunni Caliphate in the heart of what had once been two staunchly secular Socialist states in the Middle East.

The first and most crucial step in the creation of the ISIL Caliphate was the March-April 2003 US overthrow of the Sunni-dominated Baathist-Socialist regime in Iraq in the name of fighting Al Qaeda (which was actually shattered and in hiding in the remote tribal areas of Pakistan by this time) and hunting for Iraqi nuclear weapons programs and other chemical and biological WMDs (neither of which existed). This US invasion overthrew 500 years of Sunni dominance over the Shiites and disenfranchised Iraq’s ruling sectarian group. America achieved de-Sunification by disbanding the Sunni-dominated Iraqi Army and Baathist Party and essentially firing hundreds of thousands of Sunnis. When the previously repressed Shiites then took control of the police, army and government, they used their newfound power to oppress Sunnis.

Not surprisingly, the Sunnis responded to their disenfranchisement by launching a bloody insurgency against the Americans and the new Shiite-dominated government. Unfortunately, the disempowered Sunnis, who had been led by secular Baathist socialists for decades, turned to militant Islam to fight the US invaders. Many formerly secular Sunnis grew their beards long, rediscovered Islam and joined the newly formed Sunni group ‘Al Qaeda in Iraq’ to wage jihad. President George Bush’s 2002 claim that there was Al Qaeda operating in secular Iraq had thus become a self-fulfilling prophecy and the 2003 invasion inadvertently “jihadified” tens of thousands of formerly secular Sunni Baathists by 2004.

The Sunni uprising was ultimately put down by US surge troops and the rise of the so-called Anbar Awakening (i.e. the creation of anti-Al Qaeda militias among Sunnis who had become disgruntled with the extremists’ reign of terror). On December 16, 2011, US troops withdrew from Iraq. It is crucial to note that the treaty to remove US troops from Iraq was signed in 2008 by President Bush and represented the will of the war weary US public whose country had lost 4,500 troops in Iraq and the democratically elected Iraqi government of Prime Minister Nouri al Maliki. As the US troops withdrew, Maliki, who was a Shiite, promised to treat the Sunnis fairly and include the Sunni Anbar Awakening militias in his military.

Unfortunately, Maliki proved to be more loyal to his Shiite followers and immediately moved to arrest his Sunni Vice President and further weaken Sunnis, including the Anbar militias. When the Sunnis protested and set up protest camps across Anbar Province, Maliki used Shiite troops to suppress them. By the winter of 2014, the outraged Sunnis had risen up and taken control of Fallujah, a Sunni city that had been the former headquarters of Al Qaeda in Iraq and scene of two bloody US operations in 2004. Among them were members of ‘Al Qaeda in Iraq’ who had by this time changed the name of their Sunni terrorist organization to ISI (The Islamic State in Iraq). ISI was clearly presenting itself as the group that best represented the disenfranchised Sunnis vis a vis the repressive, American-installed Shiite government of Maliki.

As all of these events were taking place in post-US Iraq, the so-called ‘Arab Spring’ spread to Syria in 2011 and inspired Syrian Sunnis to rise up for greater rights against their country’s Alwaite-Shiite-Baathist rulers. When their protests were met with slaughter and brutality, the Syrian Sunnis fought back and formed the Al Qaeda-linked Nusra Front with the help of men and materiel sent from Iraq by ISI leader Abu Bakr al Baghdadi.

At this time, Senator John McCain called for the arming of weaker moderate Sunni rebels in Syria, including the Free Syrian Army, but President Obama resisted his efforts. Obama harkened back to the 1980s when the US armed mujahideen rebels in Afghanistan to fight the Soviets and some of them later turned against the US (most notably the Pashtun faction led by Gulbuddin Hekmatyar).

With no credible moderate opposition in Syria to fight the Syrian Shiite-government and its dreaded Shabiha (Ghost) death squads, thousands of Sunnis in Syria joined the Nusra Front. In April 2013, Nusra later broke with ISI (which it will be recalled had midwifed it over the previous year) after Al Baghdadi unilaterally declared the merger of the two Sunni jihadists groups under the umbrella name of The Islamic State in Iraq and the Levant (ISIL). Most Iraqi fighters in Nusra and many other foreigner fighters left Nusra at this time and joined the more radical ISIL.
By late 2013, ISIL had carved out a state in northern Syria based on the town of Raqqa. Then, in the winter of 2014, its fighters crossed the border and took control of the pre-existing anti-Maliki Sunni uprising in Fallujah (described above). ISIL thus positioned itself as the most aggressive defender of Sunnis in Iraq as well as the jihadist group most interested in seizing control of land from other moderate Sunni groups in Syria.

The stage was set for ISIL to march on the northern Sunni town of Mosul (Iraq’s second largest town), by June 2014. In June, ISIL raced north and routed Maliki’s Shiite army which did not have the will to defend this Sunni town. Had Maliki brought Sunnis (including the Anbar militias which had 103,000 fighters) into his army and government, they might have fought to protect Mosul from the ISIL militants as they had done during the Anbar Awakening back in 2007. Instead, the repressed Sunnis joined ISIL whose numbers surged to over 31,000 after the conquest of Mosul according to the CIA.

Thus the invading Americans, oppressive Shiite government of Bashar Assad in Syria, and the Shiite-dominated Maliki government in Iraq all (inadvertently) worked together to achieve what would have been unthinkable back in March of 2003 when Iraq was run by the Sunni-Socialist ruler Saddam Hussein, namely the creation of a transnational Sunni jihadi Caliphate that rules an area larger than the UK and has control of eight million people.

Brian Glyn Williams is Professor of Islamic History at the University of Massachusetts-Dartmouth and author of The Last Warlord. The Life and Legend of Dostum, the Afghan Warrior who Led US Special Forces to Topple the Taliban Regime and most recently, Predators. The CIA’s Drone War on Al Qaeda