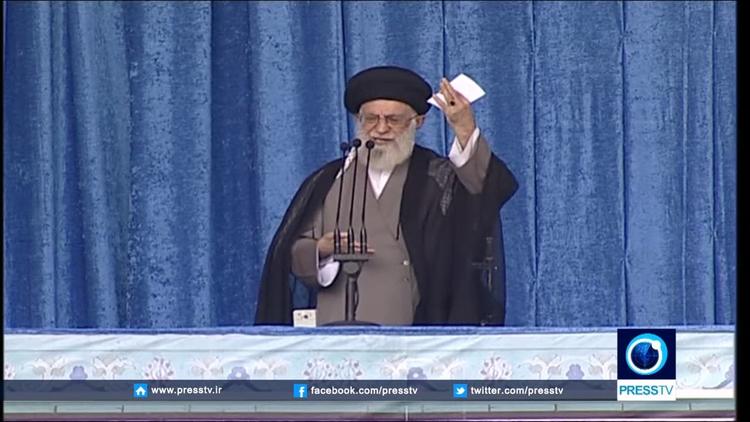 On the one hand, he praised the negotiators at Vienna who in long and arduous negotiations crafted the deal on Iran’s nuclear enrichment program. He said its path to ratification would proceed in accordance with the law. He said, “Hopefully it will be.”

He expressed annoyance at repeated American assertions that they had closed off Iranian paths to a nuclear weapon with these accords. He said,

“Many years ago I gave, on the basis of Islamic principles, a fatwa forbidding the construction of a nuclear weapon. We have a legal prohibition on the production of such a weapon. The Americans, despite sometimes recognizing the importance of this fatwa, in their instructions and remarks have lied and allege that they have prevented Iran from making an atomic bomb.”

So he reasserted his fatwa (which there is a concerted attempt in some quarters in the US to deny) against nuclear weapons. That he has this stance tells you why he agreed to the nuclear deal. He never wanted an atomic bomb, indeed, has forbidden them, and I think President Hassan Rouhani convinced him that Iran would be better off if it acquiesced in the inspections that would convince the suspicious west of Iran’s good intentions.

He also said, “We do not accept any war, and will never start a war.”

On the other hand, he defended chanting “Death to Israel!” and “Death to America.”

He said with regard to Iran’s foreign policy, nothing will change and it will go on supporting its friends regardless of what the US thinks. He condemned the US for branding Hizbullah a terrorist organization. He said the US is supporting Israel, which has killed children [during the Gaza War last summer].

He expressed his sorrow for the travails many people in the Middle East region are living through, mentioning Bahrain, Palestine, Syria, and Yemen.

His subtext is that the United States is supporting the far right wing Sunni monarchy of Bahrain in its crushing of protests by Bahrain’s disenfranchised Shiite majority. The US actively collaborates with Israel in punitive policies toward Palestinians and enables Israel to keep them stateless and under economic siege. The US supports the Saudi and GCC war on the Houthis in Yemen. And the US says it wants to see Bashar al-Assad overthrown in Syria, though Khamenei clearly thinks what will come after that overthrow will be ISIL or al-Qaeda rule over the 10-14% of the Syrian population that is Alawite Shiite.

That is, in these four countries, Iran is at odds with US policy. Khamenei played up this policy differences with the US to underline his continued anti-imperialism.

Khamenei did not mention all the ways that the US is now de facto allied with Iran, e.g. against Daesh (ISIS, ISIL). For instance, in Iraq (which he did not mention in connection with popular suffering), the US Air Force has bombarded ISIL targets while helping Iraqi Shiite militiamen, who in turn are supported by Iran.

So Khamenei was ignoring his partial alliance with the US, and playing up the places where he has policy differences with America. I conclude that he was playing to the hard liners in the audience.

His speech was an attempt to convince the hard liners that he is still an anti-imperialist, and that he has not gone over to the Americans. He underlined that he will continue to have deep policy differences with the US. None of those differences, he implied, is affected by the nuclear deal, which is narrow and specific.