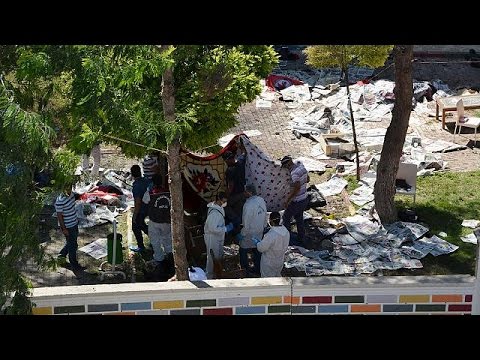 According to Alarabiya, on Monday a young woman aged 18 detonated a suicide bomb belt at a socialist youth rally in Suruç, Turkey, just ten miles from the border with Syria.

Some three hundred members of the Federation of Socialist Youth Associates were on a summer trip to help reconstruction of Syria’s Kobane, just across the border from Suruç. They were staying at the Amara Culture Center, which is administered by the local municipality, which answers to the pro-Kurdish, leftist Peoples’ Democratic Party (HDP). Suruç is a Kurdish-majority town of some 60,000.

Selfie taken by leftist youth shortly before the blast

Although there is speculation that the bombing was the work of Daesh (ISIS, ISIL), that allegation cannot yet be confirmed.

Daesh was forced out of Kobane by Kurdish fighters of the People’s Protection Units (YPG), along with US and allied aerial bombardment. The far rightwing believers in a revived caliphate had targeted the Kurdish population in Kobane but were repelled.

The HDP issued an angry memorandum complaining about lax security along the border. HDP got 11% of seats in the most recent election.

Kurds in Istanbul demonstrated against the atrocity, implying that the Turkish government is supporting or winking at Daesh, and were cleared by riot police.

Also on Monday, YPG fighters took the southern reaches of the city of Hasaka, trapping Daesh forces within. A Daesh assault on Hasaka has been repelled. The Kurdish forces once shared duties with their Syrian Arab Army counterparts there, but are now increasingly in control.

Many Turkish Kurds feel that the ruling Justice and Development Party bigwigs are soft on Sunni Arab terrorism, while they are hard on progressive Kurds.

Kurds are among the few good fighters on the Allied side and have taken substantial territory in Syria from Daesh in recent months. This development in turn disturbs Turkey, since it fears Kurdish separatism.