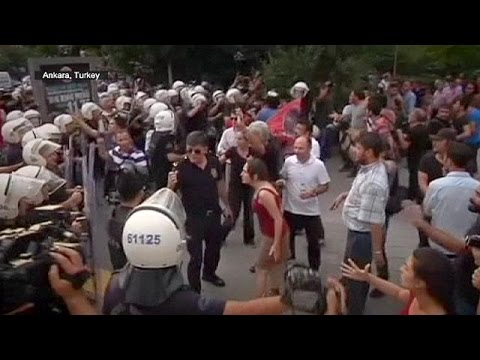 What was at first announced as a new Turkish turn toward attacks on Daesh (ISIS, ISIL) on Friday has quickly become largely a campaign against Kurds instead. It is being alleged that the Turkish Air Force launched dozens of strikes against bases of the Kurdistan Workers Party over the border in Iraq on Saturday, and just 4 against Daesh positions in Syria.

Political cartoonists had fun with the mismatched sense of priorities:

Early on Sunday Turkish police in the capital of Ankara dispersed hundreds of Kurdish activists who gathered to protest the bombardments, and arrested 25. the headlines say something about the protesters not wanting the campaign against Daesh, but these were mostly Kurds and they weren’t demonstrating in favor of the beheaders. Turkey’s twin campaign has a propaganda element that the press is sometimes falling for.

Some 550 persons have been detained by Turkish police, including a prominent Salafi preacher suspected of ties to Daesh/ ISIL. But Kurdish activists maintain that a large number of the arrestees are not Daesh at all but just Kurdish Turks. In other words, the AKP government is taking advantage of its alleged turn against Daesh actually to crack down on the Kurds instead.

The PKK had had a truce with the Turkish government since 2013, but a PKK spokesman said Saturday that the truce, and any peace process are at an end given the bombing campaign Ankara launched against them.

The US and Turkey consider the PKK a terrorist organization, and in the past it has been extremely violent. In the 1980s and after some 30,000 persons died in southeastern Turkey in a dirty war between the PKK guerrillas and the Turkish army. Some 20% of Turkey’s 75 million people are ethnic Kurds, who mainly live in the hardscrabble southeast of the country. Very few Kurdish Turks are separatists, but Ankara is obsessed with the danger that they might turn in a secessionist direction, encouraged by moves toward autonomy of Kurds in Syria (Rojava) and in northern Iraq (the Kurdistan Regional Government).

The PKK seemed a spent force 15 years ago, but the Bush invasion and occupation of Iraq destroyed that country’s security and some 5000 PKK commandos fled Turkey to camps on the Iraqi side of the border.

The pro-Kurdish left of center Peoples’ Democratic Party (HDP), which has 13 percent of seats in the Turkish parliament, complained that

“It is unacceptable for [Turkish President Tayyip Erdogan] and the Justice and Development Party [AKP] to make their war on the Kurdish people part of their war on Daesh.”

The turn of Kurdish Turks to parliamentary politics and their entry into parliament in the recent elections could have formed a basis for improved Turkish-Kurdish relations. Instead, the Islamically-tinged AKP seems to have seen this development as a threat and appears to want to polarize the country so as to weaken and isolate the Kurds.

The HDP believes that the bombardment of PKK positions is an electoral ploy intended to whip up nationalist Turkish fervor in case there are snap elections because Prime Minister Ahmet Davutoglu of the center-right ruling Justice and Development Party could not put together a coalition with another party.

In Iraqi Kurdistan, the bombings put KRG President Massoud Barzani in a bind. He had sought better relations with Ankara after the rise of Daesh, Salafi Arab organization that relentlessly attacks Kurds. People are accusing him of letting Turkey bomb Kurdish territory, and President Erdogan said after a phone call with Barzani that the Kurdistan Regional Government leader approved of the bombardment of PKK positions. Barzani himself denied saying any such thing and he demanded that Turkey stop its aerial bombardment immediately. Barzani’s forces, the Peshmerga, and the PKK fighters had not gotten along until last summer, when they united against the depredations of Daesh. Barzani’s government is center-right whereas the PKK are leftists and former Communists.

The HDP theory is that Erdogan is doing all this to win the next parliamentary elections which could come as early as four months from now if coalition talks between the AKP and its rival, the Republican People’s Party (CHP) fail. I don’t know if that is true. I can’t actually see how AKP could improve its fortunes by mobilizing Turkish Kurds. Maybe AKP leaders are convinced they lost the last election, or didn’t get 51% of seats, because of low turnout among ethnic Turks?

In any case, sensible analysts agree that Erdogan’s decision to ruin the truce with the PKK is a fateful one, and that it could throw Turkey into disarray.

Euronews: “Protests erupt in Turkey and Iraq over Ankara’s operations against IS and Kurdish militants”