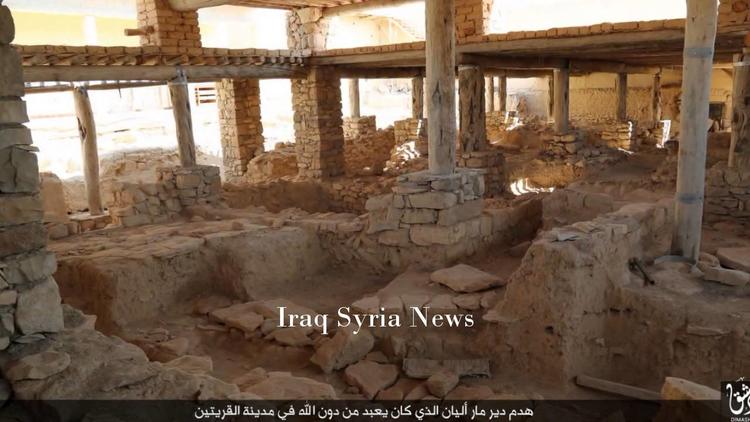 “Yet again, ISIS violated the sanctity of Christianity in the Middle East and in Syria in particular. This time, the target was the Monastery of Mar Elian [St. Julian of the East] in the town of Qaryatain, 68 miles northeast of Damascus. ISIS posted photos on social media networking sites showing the desecration of the monastery, exhuming the remains of Saint Elian who was killed by Roman soldiers in 285 A.D. Other photos show ISIS militants adulterating this holy place as bulldozers were demolishing the compound.

Church sources in Hasaka, 326 miles northeast of Damascus, were quoted as saying that 60 Christians including women and children were abducted by ISIS militants when they seized the town of Qaryatain on August 6, 2015.”

The Dayr Elian archeology project has a web site with an overview and gallery. It says,

“Dayr Mar Elian esh Sharqi (the monastery of St. Julian of the East) is located to the west of the village of Qaryatayn in the Syrian desert between Homs and Palmyra. As an oasis settlement Qaryatayn has been inhabited for many millennia, as illustrated by the substantial tell south of the modern village. It is on the Damascus-Palmyra trade route on a Roman limes and so housed a garrison of soldiers to safely escort visitors across the desert – a practice that was continued until the end of the nineteenth century.”