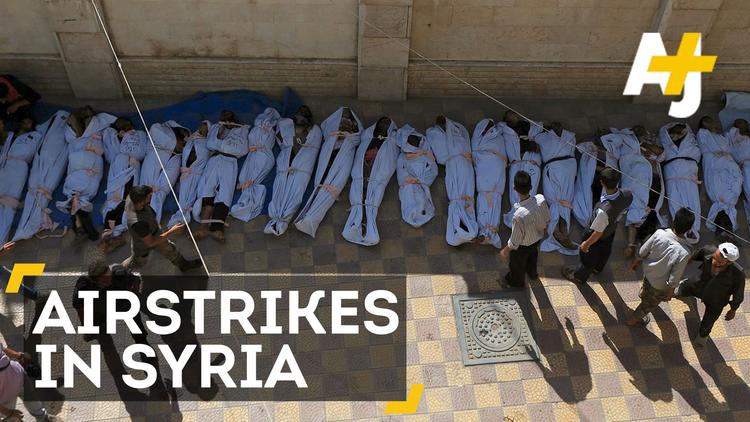 (New York) – The United Nations Security Council should impose an arms embargo on the Syrian government following the government’s repeated air attacks on Douma’s popular markets and residential areas on August 16, 2015. The attacks killed at least 112 people, whom witnesses and first responders described as overwhelmingly civilian.

The Syrian air force conducted four airstrikes within minutes of one another on the main street vendor markets in Douma, the most populous town in besieged eastern Ghouta, an area under the control of opposition armed groups. Human Rights Watch spoke to four witnesses who said that there were no military targets nearby and that the nearest base or combatant front line was at least two kilometers away. Syrian authorities did not comment directly on the strikes other than to criticize the UN envoy, Staffan de Mistura, who had called the strikes on Douma “devastating” and “unacceptable.”

“Bombing a market full of shoppers and vendors in broad daylight shows the Syrian government’s appalling disregard for civilians,” said Nadim Houry, deputy Middle East director. “This latest carnage is another reminder – if any was still needed – of the urgent need for the Security Council to act on its previous resolutions and take steps to stop indiscriminate attacks.”

Witnesses and first responders told Human Rights Watch that the four airstrikes hit the crowded markets, known locally as the al-Hal, al-Houboub, and al-Ghanam markets, at about noon. All three markets are within 500 meters of one another. Two first responders described a chaotic scene, with the dead and injured scattered on the streets. They said they found about 70 bodies and large numbers of wounded as they arrived. About five minutes after the four airstrikes, government forces fired mortars and rockets into the area, killing six more people, the witnesses said.

Later that afternoon, airstrikes hit a residential area in Douma known as Masaken, or Abed al-Raouf. One Masaken resident told Human Rights Watch that the strikes killed at least 30 people and that government forces opened fire later in the day on those trying to bury relatives in the cemetery. “We had to run 400 meters to the cemetery under the sniper’s bullets to bury my cousin,” he said. “On our way back, mortars started falling again and two people were injured from shrapnel while burying the victims. They do not even want us to bury our martyrs.”

According to the Violations Documentation Center in Syria (VDC), a local monitoring group, government aerial and shelling attacks killed at least 462 civilians and 16 fighters in eastern Ghouta between January and June.

Armed groups operating in eastern Ghouta have also indiscriminately shelled civilians living in nearby government-held territory. A March Human Rights Watch report documents indiscriminate shelling of residential areas and markets by armed groups and called on the Security Council to impose a suspension of all military assistance to parties implicated in widespread or systematic violations.

The latest flare-up between government forces and armed groups in eastern Ghouta began on August 12, when armed groups launched mortar shells on several areas in Damascus hours ahead of a visit by the Iranian foreign minister, Mohammad Zarif, killing 11 civilians, the Syrian Observatory for Human Rights reported. Shortly afterward, government warplanes unleashed a wave of airstrikes on several opposition-held suburbs of the capital, including Douma, killing 37, the Syrian Observatory for Human Rights reported.

On February 22, 2014, the Security Council demanded “that all parties immediately cease all attacks against civilians, as well as the indiscriminate employment of weapons in populated areas, including shelling and aerial bombardment,” in its resolution 2139. On August 17, one day after the Ghouta attacks, the Security Council issued a presidential statement reiterating its demands that all parties cease attacks against civilians as well as any indiscriminate use of weapons in populated areas.

UN Security Council members, including Russia, which has shielded the Syrian government from sanctions and accountability, should take immediate steps to enforce that demand, Human Rights Watch said. In addition to an arms embargo, the Security Council should apply the same level of scrutiny it has put in place for chemical attacks to all indiscriminate attacks by monitoring these attacks, attributing responsibility for them, and sanctioning those responsible. The Security Council should also refer the situation in Syria to the International Criminal Court.

The Security Council should also demand that the government lift the unlawful siege on eastern Ghouta, which restricts civilians, the wounded, and the sick from being able to leave the area and impedes the delivery of humanitarian and medical assistance and goods needed for survival.

“How many more lives will be lost before the Security Council enforces its own words?” Houry said. “The Security Council should bring the same commitment to ending indiscriminate strikes on civilians as it has to chemical attacks.”

AJ+: “Airstrikes In Syrian City of Douma Kill Over 110 Civilians”