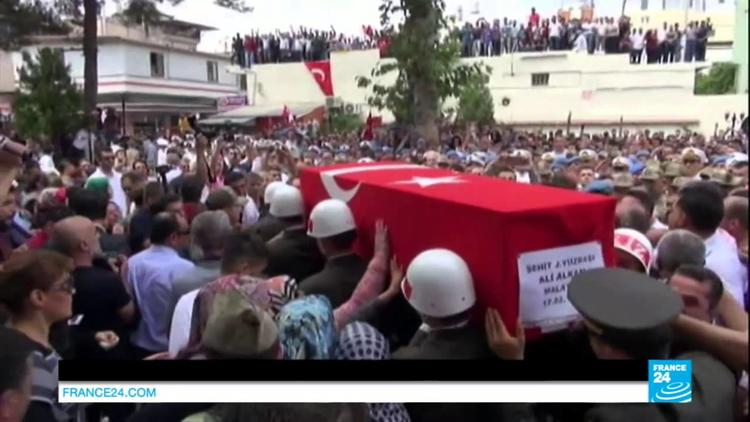 It has been a month since the government of Turkey has ended the tenuous peace process with the Kurdistan Workers Party (PKK), by bombing Qandil mountains in Iraq and rounding up Kurdish activists. What instigated the resumption of the conflict was the killing of two police officers by PKK, a retaliation following the bombing of leftist youth activists in Suruç allegedly by an ISIS affiliate. Yet at this point many – political analysts, Kurds and Turks alike – believe what actually led to the end of the truce was President Erdoğan’s political ambitions. In a recent poll, fifty six percent of those who were polled said that it was Erdoğan who was responsible for the conflict. Erdoğan, who has seen his plans for a presidential system destroyed at the parliamentary elections of June 7 when his Justice and Development Party (AKP) lost its majority, is planning for a new election in November and is believed to be clambering for the nationalist vote and attempting to weaken HDP, the pro-Kurdish party, by restarting a conflict that claimed over 40,000 lives in three decades.

The re-escalation brings back the terrible memories of the 90s in Turkey when the conflict was at its most violent, when along with the military, all the extra-judicial mechanisms of the deep state were mobilized against not just the PKK, but civilians in the region. There is escalating urban warfare in the Kurdish populated southeast; forests are being burnt, and villagers are being forced out of their villages – yet again. There seems to be a constancy to news of violence and death: as of August 20, there are a total of 139 casualties, including PKK fighters, police, soldiers, and civilians; many Kurdish activists, including politicians, have also been detained or jailed.

The constant stream of dead bodies means a constant stream of funerals, held in different corners of Turkey. Funerals are important symbolic events anywhere; and in the Turkish case the funerals of soldiers who died fighting the PKK have always been national political spectacles. Who gets to have a funeral and how, carries meaning, orchestrated by the state that demonstrates that even after the end of life it controls one’s body. In the Turkish case, ‘terrorists’ are not allowed to have a funeral, they have no graves, their bodies can get mutilated, ridiculed. Funerals can be disrupted, attacked if they are the funerals of the ‘wrong’ kind of people. Funerals of soldiers, however, are attended by the military and politicians and marked by symbols of the nation, especially the flag on the coffin. The one who passed away is never just an individual – he is a ‘martyr,’ a member of the military who gave away his life for the ‘nation’. These funerals are attended by large crowds and they become arenas where people collectively express their anger and grief, usually aimed at ‘terrorists’. They are reported about on the first page of national newspapers, on televisions; almost always in a formulaic way, employing a certain nationalist repertoire, aimed at creating feelings of national unity against ‘nation’s enemies’. Nowadays in Turkey, you will hear people say that ‘Erdoğan wants funerals.’ The sense is that Erdoğan is using the war in order to garner support, in order to create nationalist fervor which will help him regain the votes he lost. And when you see the picture of Erdoğan, with his hand on a coffin covered by a flag, you suspect that there might be some truth to that.

Yet this is the interesting thing about political spectacles. Being chaotic, public events, they are hard to control. They can be used to garner nationalist fervor; but they can also become spaces of contestation. They can backfire, get out of control. And in fact, it is specifically at funerals and the reactions to the funerals in news and social media we see that it is not 1990s in Turkey anymore and that Erdoğan might in fact have miscalculated. In almost all funerals, there were voices raised, not only against PKK, but primarily against the government and Erdoğan himself. Ministers in attendance have been attacked and chased by the public, family members have questioned the necessity of war and the motives of Erdoğan. Mothers have shouted “Erdoğan send your sons to the military!” and in the most widely circulated event, extensively shared on social media, leading to a smear campaign and an investigation, the brother of the dead soldier, a lieutenant colonel himself shouted in anger, taking jabs at both Erdoğan and the Energy Minister Taner Yıldız, who has declared that he would die for his country. This, a career soldier criticizing the government and war openly during the funeral of another soldier would have been inconceivable in the past.

If violence and funerals were supposed to bring people together in support of Erdoğan, they seem to be failing. Instead they point to the crumbling dominance of Erdoğan, who was once revered by the conservative public. There is no question that Erdoğan still garners a significant share of votes. But the bond he once had with the public seems to be broken; first with the corruption scandals involving his family, then with the Soma mining disaster and Kobani, and now with the end of the peace process. Even among the conservative Muslims, there is unease and anger that is being openly expressed. Dictators do not become dictators solely by coercion or by controlling material resources; they also do so by their ability to manage the symbolic world, by manipulating the meaning of events. These funerals signify that Erdoğan might be running into hardship in this respect, and as such, in his effort to become the sole center of political power in Turkey. Of course, this does not necessarily mean that he is going to stop trying.