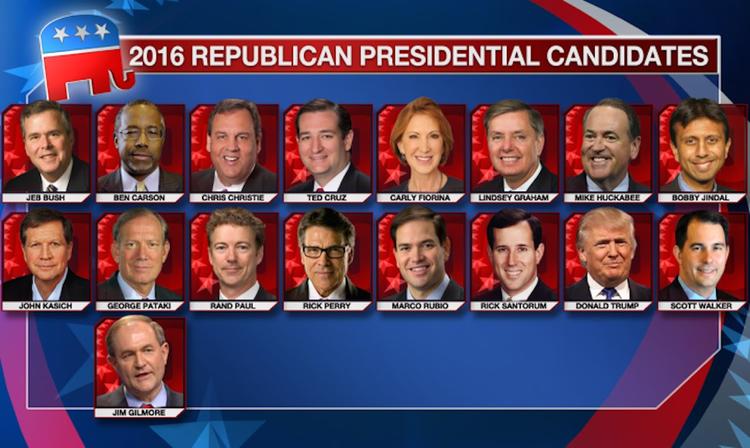 Fox Cable News announced its pick for the 10 Republican presidential candidates it will allow in its Thursday debate. These are candidates who are getting at least 3% support in a basket of opinion polls, including one commissioned by Fox itself. CNN will follow a similar procedure for the debate it will televise in September.

Now that we know the roster of the big ten, I thought we should review them on one key issue, of how likely they are to drag us into another war. And what is amazing is that sending US troops back into the Middle East and going to war there is virtually a plank in the GOP platform. After the disaster in Iraq, they are actually running on war and against diplomacy for the most part!

I think this saber rattling in part has to do with the advent of truly big money in US politics and the end of campaign finance limitations. Since the Republican Party is in general the representative of the 50% of the economy dominated by big corporations, and since arms manufacturers are among those big companies, the GOP has become increasingly the party of war and belligerence. If you actually drop those bombs, you have to order more, which is good for some businesses. In fact, one candidate who did not make the cut and is a notorious warmonger, Sen. Lindsey Graham (R-SC), is apparently mainly backed by military-industrial complex money. It is no surprise that he is perhaps the most aggressive candidate in his statements on foreign policy, though he has a lot of competition.

Here is how they stand on this key issue of war and peace, life and death:

Donald Trump (with a polling average of 23.4 percent):

“America’s primary goal with Iran must be to destroy its nuclear ambitions. Let me put them as plainly as I know how: Iran’s nuclear program must be stopped–by any and all means necessary. Period. We cannot allow this radical regime to acquire a nuclear weapon that they will either use or hand off to terrorists. Better now than later!”

I take “by any means necessary” to be enthusiasm for war on Iran, since their civilian nuclear enrichment program cannot be shut down by any other means.

Trump has also urged a US bombing campaign against Iraqi oil refineries as a way of defeating Daesh (ISIL, ISIS). Since Iraq will need those refineries to rebuild after Daesh is defeated, bombing them wouldn’t be optimal. But there you have it.

Rejects diplomacy with Iran, wants to send more US troops to embed with the Iraqi army in Iraq.

Walker said “that not only would he undo any deal with Iran on his first day as president; he would do so even if our European allies wanted the deal to continue.”

So, brinkmanship and unilateral action.

Mr. Walker also said in February that that if he could take on union protesters of Wisconsin, he can take on ISIL. He seems to confuse exercizing first amendment rights with being a target.

Huckabee characterized the Iran deal as marching the Jews to the Nazi ovens. I presume that means he would risk war with Iran.

In an interview on Fox, “Huckabee was quick to return to those comparisons, saying, “I don’t want to standby and watch it happen again. I do not want to stand by and see Jews get targeted, because if they come after them they will eventually come after all of us. We’ve seen this before.”

Mediaite also notes, “Huckabee proposed a “third option” that involves taking the Russians, Iranians and Saudi Arabians “out of the energy business” but making the U.S. energy independent.” Short of going to war on them, it is hard for me to imagine how he would do that.

Rejects the idea of war crimes. He said: “If you’re gonna have rules for war, you should just have a rule that says no war,” he said. “Other than that, we have to win. Our life depends on it.”

He also says that the Iran deal endangers all Americans and that he would reduce personnel cutbacks in the US military.

Says nuclear deal will “lead to war” and cause the death of “millions of Americans” by undoing the sanctions regime on Iran.

Says “war with Iran is an option.”

Has renounced containment as a policy toward Iran and now says the country is too dangerous for that policy to succeed.

But the bigger and more powerful Soviet Union was contained. And is the alternative war?

Says President Obama, having drawn a red line on Syria, should have “finished the job.”

War in Syria, then.

Would not immediate rip up Obama’s Iran deal.

But would send US troops to fight ISIL.