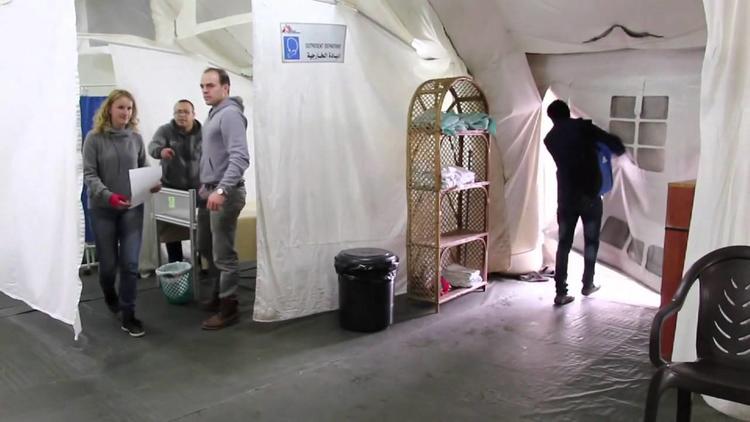 The rubble of twisted concrete and metal bakes in the hot Mediterranean sun of a regional heat wave. A year on from Israel’s 51-day military operation in 2014, not a single one of the 11,000 destroyed homes in Gaza has been rebuilt. Photo credit: UNRWA Archives/Shareef Sarhan

BETHLEHEM, Palestine, Aug 15 2015 (IPS) – The rubble of twisted concrete and metal bakes in the hot Mediterranean sun of a regional heat wave.

Eight months ago, the infrastructural devastation in the Gaza Strip was the same, except floodwater and freezing winter temperatures swept over the heaped remnants of people’s homes and businesses.

A year on from Israel’s 51-day military operation – in which over 2,200 Palestinians were killed, including more than 500 children – not a single one of the 11,000 destroyed homes has been rebuilt.

The task of large-scale reconstruction work was entrusted to the Gaza Reconstruction Mechanism (GRM), a United Nations-brokered agreement between Israel and the Palestinian Authority which would oversee the distribution of building materials entering Gaza.

“Most of the 100,000 Palestinians displaced by the [2014] war continue to live in makeshift shelters, often in the rubble of their former homes, and the landscape is littered with miles upon miles of apocalyptic decay where homes, shops, and restaurants once stood”

To date, only 5.5 percent of the building materials needed to repair and rebuild homes and other damaged infrastructure has entered the coastal enclave, according to Israeli rights group Gisha, founded in 2005 to protect the freedom of movement of Palestinians, especial Gaza residents.

Failed promises by donor countries which pledged 5.4 billion dollars last October, political tensions between the Palestinian Authority and Hamas, and Israel’s continued restrictions on materials entering the territory have all impeded reconstruction efforts.

However, many hold the GRM directly responsible for the glacial pace of reconstruction, arguing that the terms of the agreement have entrenched Gaza’s underdevelopment by granting Israel control over nearly every aspect of the rebuilding process.

“We cannot build a house if Israel says no. Israel decides whether homes are built or not.”

As part of the GRM, Israel has case-by-case approval over individual applications for building materials, veto power over construction companies put forward by the Palestinian Authority to provide those materials, and access to the Authority’s Ministry of Civil Affairs database, which registers the ID numbers and GPS coordinates of Palestinians whose homes were destroyed.

According to Gisha, private owners, building plans, locations and the quantities all require Israeli approval, with companies and merchants who store the construction materials – mostly aggregate, cement and steel bars – forced to place security guards and install cameras to supervise the goods 24 hours a day.

This lengthy and expensive bureaucratic process, designed specifically to meet Israel’s stated security concerns, has meant the process is at a virtual standstill.

“The GRM has failed because it gives Israel veto power over everything. There are no changes on the ground so far,” complains Snunu.

In January, the Brookings Doha Centre said in a policy briefing that the GRM has effectively seemed to offer “legitimacy to the Israeli blockade” and placed “exclusive reliance on Israel’s willingness to allow the flow of reconstruction materials” for success of the mechanism.

In recent months, Oxfam says that more building materials are entering Gaza, but the levels are still only 25 percent of those before Israel’s blockade was imposed some eight years ago.

“At this pace it could take 19 years to finish just the rebuilding of homes destroyed in 2014 and at least 76 years to build all the new homes that Gaza needs,” said Oxfam’s Arwa Mhunna.

Most of the 100,000 Palestinians displaced by the war continue to live in makeshift shelters, often in the rubble of their former homes, and the landscape is littered with miles upon miles of apocalyptic decay where homes, shops, and restaurants once stood.

The vast infrastructural damage last summer, caused by an unprecedented amount of explosive weaponry used by Israel’s military, compounds the effects of an eight-year blockade and two other Israeli military offensives since 2008, with damage from those conflicts barely addressed.

Gazan institutions and stakeholders have been largely excluded from the rebuilding process following the three wars, placing the civilian population at the mercy of political infighting, unfulfilled international promises and Israel’s blockade.

“Gaza had already been destroyed completely before the war. This agreement did not change anything, Palestinians were told their homes would be rebuilt, but these promises have been broken by the international community and the PA,” says Snunu.

In May, the World Bank reported that Gaza had the highest unemployment rate in the world at 43.9 percent, with 67 percent of under 24-year-olds unemployed. Real per capita income is now 31 percent lower than it was 20 years ago, at 970 dollars a year, the report added.

At least 80 percent of Gazans are dependent on humanitarian aid.

“The situation in Gaza is getting more serious and dire,” says Mhunna. “The humanitarian crisis is continuing and now affects all aspects of life. Displacement has lasted for over a year since the war and there is a devastating economic situation.”

Hamas officials, rights groups, and both local and international NGOs had repeatedly stressed last year during ceasefire negotiations that Gaza must not return to a status quo of blockade.

Since Israel disengaged from Gaza in 2005 – withdrawing some 9,000 settlers and military forces – it has repeatedly claimed that it is no longer occupying the territory and has held Hamas responsible for the civilian population.

Yet 10 years later, Israel controls the movement of Palestinians in and out of Gaza, the food they can have access to, whether they can receive medical treatment or not, and now under the terms of the GRM, whether their homes can be rebuilt.

“The GRM harms Palestinians more than it benefits them. What is clear in our demands is that the GRM heightens the blockade and Gaza will not be rebuilt unless the blockade is lifted,” says Snunu.

“Palestinians need solutions for the crisis, not mechanisms that manage the crisis.”

Doctors without Borders from last month: “The Gaza Strip: One Year After the Last Bombing”