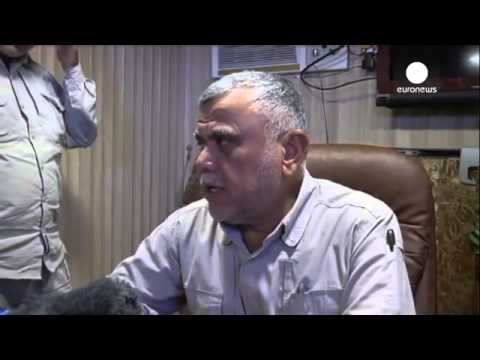 Once they were focused on fighting extremists. Now Iraq’s controversial volunteer Shiite militias seem to be preparing the ground for their political debut.

It’s been extremely hot in Iraq over the past few weeks – summer temperatures have gone as high as 51 degrees Celsius regularly – and steaming Iraqis have been protesting the lack of electricity they need to keep their houses and food cool. They are only getting an average of six hours of power every day and in Nasiriya and Basra sometimes-violent protestors demanded that the Minister of Electricity, Qassim al-Fahdawi, be replaced.

What was not surprising was that this subject was one of the first addressed by the Iraqi Parliament in it’s first session after the recess. Also not surprising were the insults, questions and recriminations that flew when al-Fahdawi was questioned by his fellow MPs.

What was surprising though was the statement issued by Hezbollah in Iraq, one of the country’s unofficial militias, currently fighting against the extremist group known as the Islamic State. The militia’s statement said that the group itself “intends to meet with the Minister of Electricity to ask him why there is such a power crisis, as well as prosecute any corrupt officials involved”. In the statement the militia group also said they would ask Basra police not to harass protestors.

Previously Hezbollah in Iraq has not gotten involved with politics at this level. But now they somehow felt they should.

There were mixed reactions to the statement. Some welcomed it, saying that if these kinds of militia groups didn’t get involved in Iraqi politics then there would never be any solutions to the country’s problems. On the other side of the argument, there were those who thought it was a concerning example of how the Shiite Muslim militias, currently so important in Iraq, are making unjustified interventions in Iraqi politics.

“All of the country’s politicians are corrupt – they don’t respect the law, they steal our money and they don’t provide any government services,” Khudair al-Amiri, a tribal leader who lives in the Sadr City neighbourhood in Baghdad, told NIQASH. “That’s why the militias should discipline them and stop their thieving.”

Should leaders of the Shiite militias decide to stand for office during Iraq’s next elections, al-Amiri said he would gladly vote for them.

In another incident, Qais al-Khazali, who heads the Shiite militia known as the League of the Righteous, explained why the Iraqi political system should be changed from a parliamentary one to a presidential one.

Up until now, the leaders of the Shiite militias have not made too many politically-oriented statements like this. Given the apparent inability of the regular Iraqi army to fight the extremist Islamic State, or IS, group, the Shiite militias – made up mostly of volunteers and not really under the control of the Iraqi government – remain at the vanguard of the fight against the IS group. Many of the militias are posted in safer areas, in southern Iraq and in Baghdad, where there is not much real fighting going on. Others are on the front lines. And in the areas where the militias do fight, they don’t always agree with one another. Often there are territorial conflicts between the militias themselves, or the army or police. Should the militias participate in elections, observers suggest that those kinds of conflict will doubtless escalate. Some even worry that the militias will go from fighting the IS group to fighting one another.

Additionally the adage that “the land belongs to those who liberated it” now dominates this security crisis. Shiite militias who were victorious over the IS group in Sunni cities are retaining control over those central Iraqi cities. Similarly in northern Iraq, Iraqi Kurdish military have driven the IS group out of Arab-majority areas but they don’t seem keen to hand back control of that terrain to any Arabs. The various groups justify this by saying they have spent their own money and blood on capturing the cities back from the IS group.

Although Iraq’s Prime Minister, Haider al-Abadi, has done his best to reign in the militias and bring them back under state control, he has met with limited success. Locals say the militia members roam the streets of Iraq with relative impunity, they carry no legal documents and it is impossible to hold them accountable for their actions.

All of this must have an impact on Iraqi politics in the near future.

“There is no doubt that the Shia militias will have their own political wings in the future,” says local analyst, Samir al-Tai. “And there is no doubt that the political offshoots will participate in upcoming federal and provincial elections. Also highly likely, they will do very well in those elections. They have a lot of presence on the ground and their members live among the voters.”

It could be similar to what has happened with Hezbollah in Lebanon, al-Tai argues, where the Lebanese group keeps hold of its own weapons, guards its own territory and refuses to hand either over to the actual Lebanese government. Hezbollah in Lebanon also has political offshoots that participate in the democratic process.

The Shiite Muslim-dominated parties that have been in power in Iraq since 2003 also fear the militias gaining more power and voters. Indeed some have formed their own militias in order to ensure their own popularity. All of the political-party-founded militias have participated in fighting to some degree.

Another issue that concerns established Iraqi politicians comes from the Sunni Muslim side. The popularity of Sunni-Muslim-majority parties in Iraq has declined as they appeared powerless in the face of the IS group, which also bases its ideology on an extreme form of Sunni Islam. Instead local tribes have gained in prestige during the security crisis.

Last week, Sunni Muslim politicians in Iraq held a meeting to discuss this. After the meeting one attendee spoke to NIQASH on condition of anonymity because he was not allowed to comment to media. “Sunni parties are afraid that Shiite militias will dominate in Sunni cities, or that the tribes they support will dominate in Sunni cities,” the source said. Basically the Shiite militias and their Sunni allies are controlling these cities and it would be impossible to guarantee the integrity of any elections in the future. “The Shia militias hate the other Sunni parties,” the sources said, “and they will do everything they can to ensure that their Sunni allies win votes.”

“The leaders of the Shiite militias have already promised that they will change the political process after this war with the IS group ends,” Ali al-Badri, a Shiite Muslim MP, told NIQASH. “But their potential war against corruption and their participation in the political process may be even more dangerous than the fight against the Islamic State.”