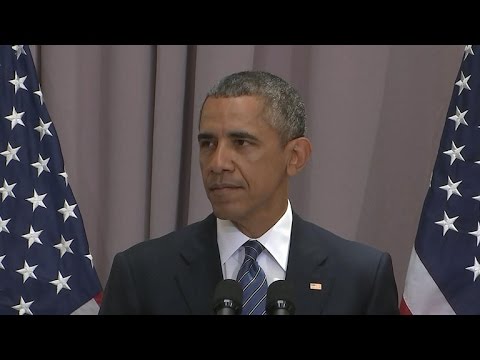 Lame duck Obama pulls no punches. In his major address Wednesday on the Vienna deal reached with Iran, Obama let his critics have it.

I take it he has done the math and knows that the Republicans in the House and possibly the Senate will reject his Iran deal, but that they do not have the votes to over-ride his veto of any restrictions they try to put on it. So he, unlike first-term Obama, has no illusions that he can reason with the GOP gangsters on the Hill. Instead, he is already reaching over their heads to the American public and trying to convince it that he is doing the right thing. So since he can’t likely persuade the GOP Congress, he is letting them know what he really thinks of them at last.

“Now, when I ran for president eight years ago as a candidate who had opposed the decision to go to war in Iraq, I said that America didn’t just have to end that war. We had to end the mindset that got us there in the first place.

It was a mindset characterized by a preference for military action over diplomacy, a mindset that put a premium on unilateral U.S. action over the painstaking work of building international consensus, a mindset that exaggerated threats beyond what the intelligence supported.”

This is a bolder than ever before characterization of the Iran deal’s knee-jerk critics, many of whom, Obama correctly pointed out, were against the deal even before they had any of its details. He is laying the Iraq War directly at the feet of the Republican Party and of war hawks among the Democrats (though note that contrary to what is often alleged, the majority of House Democrats voted against the Iraq War).

What was wrong with that rush to war? It derived, Obama says, from an active preference for war rather than diplomacy, and for a preference for unilateral American war-fighting over coalition-building.

Obama implicitly evoked the ghost of Paul Wolfowitz (now an adviser to candidate Jeb Bush), who as the number two man at the Pentagon told Congress in spring of 2003 that the Iraq War would cost $60 billion, that only 100,000 troops would be needed, and that those troops would be back out of the country for the most part by October of 2003.

“Leaders did not level with the American people about the costs of war, insisting that we could easily impose our will on a part of the world with a profoundly different culture and history. And, of course, those calling for war labeled themselves strong and decisive while dismissing those who disagreed as weak, even appeasers of a malevolent adversary.”

Dear GOP: just in case the no-drama style is confusing you, he is making fun of you as juvenile delinquents who preen and strut and call level-headed people pussies.

“More than a decade later, we still live with the consequences of the decision to invade Iraq. Our troops achieved every mission they were given, but thousands of lives were lost, tens of thousands wounded. That doesn’t count the lives lost among Iraqis. Nearly a trillion dollars was spent. Today, Iraq remains gripped by sectarian conflict, and the emergence of al-Qaida in Iraq has now evolved into ISIL. And ironically, the single greatest beneficiary in the region of that war was the Islamic Republic of Iran, which saw its strategic position strengthened by the removal of its long-standing enemy, Saddam Hussein.”

Let me expand on what Obama said. About 100,000 US troops received at least flesh wounds in Iraq, with 33,000 injured badly enough to go to hospital. Some 10,000 of those in turn were pretty badly wounded and need Veteran Administration hospital care in the long term. Nobel Prize winning economist Joseph Stiglitz estimates that over the life time of the wounded veterans, and given other costs such as replacing all those bombs we dropped, and paying off the $1 trillion we borrowed (yes, Bush fought the Iraq War with deficit financing as though he were taking out a 30 year mortgage), the Iraq War will end up costing $3-6 trillion dollars. That would mean that Wolfowitz, a mathematician, was only off by a factor of a hundred to 200.

Myself, I figure that an Iran war should cost about 3 times what an Iraq War cost, since Iran is nearly 3 times more populous and geographically expansive than Iraq. So, $18 trillion. The US gross national product is about $17 trillion annually, and our national debt (an important chunk of it built up during Bush’s wars) is about equal to that. This situation is very bad– you never want your debt to equal your GDP, and it has already hurt the US credit rating. If you double the national debt with an Iran war, you pretty much turn the US into Greece right there. You might as well just go to the Chinese embassy and offer to sell yourself into slavery at that point.

So, again, GOP, let me just expand on what he is saying: You lied us into the Iraq War in part by low-balling us. It is like when an auto dealer initially offers you an unrealistically low price on a car to get you hooked on the idea of owning it, then gradually lets you know that unfortunately there are those pesky extras like, you know, tires and windows and taxes that will rather raise the price– but you still want it, right?

And Obama is saying that he is determined that a big infantry-driven land war is just not going to happen with regard to Iran as long as he is president, and he moreover is amazed that after the Iraq debacle anyone should even be talking about such a catastrophic course of action.

Those who are, he said, are warmongers.