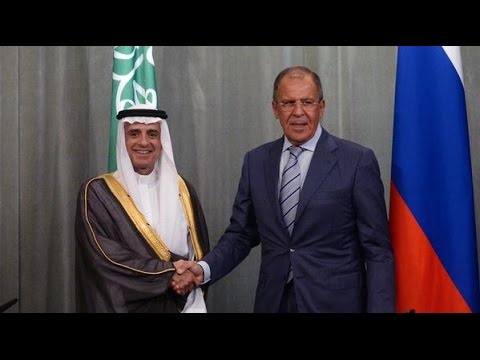 The Russian Federation is a key player in Syria, and backer of the dictatorial government of Bashar al-Assad. Moscow on Wednesday and Thursday attempted some diplomacy, however, welcoming a delegation of Syrian rebels against the authoritarian al-Assad in Damascus.

“We are sincerely interested in helping all Syrians unite around the pivotal task of preserving their country to maintain stability in the Syrian Arab Republic, and prevent its transformation into something resembling a seedbed of terrorism and suchlike threats . . . Everyone has an interest in putting up a barrier to terrorism, everyone has an interest in the speediest political resolution of the crisis in Syria on the basis of the Geneva communique, and most importantly now, to transform this into practical, coordinated actions . . .”

Deutsche Welle, the German equivalent of the US NPR, put it more bluntly.

Russian President Vladimir Putin and Lavrov offered the Syria rebels the opportunity to join a grand regional alliance against Daesh (ISIL, ISIS), including Turkey, Iraq, Saudi Arabia and the Kurds.

“Neither the head of the Syrian regime nor any citizens of the country who spill the blood of the Syrian people should be given any role in the transitional governing body. . .” RIA Novosti news agency quoted Khawjah as saying.
h/t BBC Monitoring

Putin’s dream of a grand alliance against Daesh is implausible, since most actors in Syria a more afraid of the government of al-Assad than of the ragtaq jihadis in Daesh. Al-Assad’s forces have imprisoned and tortured thousands, and have been dropping barrel bombs indiscriminately on towns and cities controlled by the rebels, a major war crime.

Saudi foreign minister Adel Jubeir also met with Russian officials on Wednesday, and Jubeir rejected the grand coalition vision out of hand. First of all, al-Assad must go, he is alleged to have declared once again that al-Assad must go.

Russia has long had a problem with radical Islam in Chechnya, in its own territory. That is one reason it is supporting al-Assad against the rebels.

The whole episode shows that different priorities of Middle Eastern and American leaders. For the Syrian rebels, Daesh is a distraction while the great and evil enemy is al-Assad.

So the Russian plan crashed and burned. But such diplomatic meetings among principals in a conflict are a good in themselves. At some point, when the factions have burned themselves out with battle fatigue, a plausible plan for compromise will emerge.