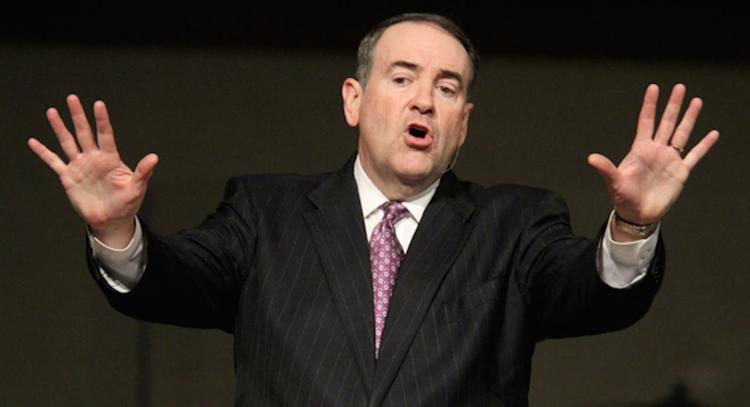 by SHALOM GOLDMAN for ISLAMiCommentary

Opinion polls and election results indicate that Israeli Prime Minister Netanyahu’s rhetoric — which compares the Islamic republic of Iran to the Nazi regime and the recently-signed accords with Iran (the P5+ 1 agreement ) to the Munich pact of 1938 — has played well within Israel. Netanyahu’s characterization of the agreement signed in Vienna as “a bad deal, an historic mistake” is widely accepted.

The Israeli government staunchly opposes the agreement and clearly views an Iranian nuclear program as a threat to its existence. This is true not only within Netanyahu’s own Likud party, but within the Israeli Jewish electorate in general. (Palestinian citizens of Israel — ‘Israeli Arabs’ in government-speak —are seldom polled about national issues)

Huckabee in Londonderry, New Hampshire at a campaign event in 2008. (photo by Craig Michaud)

Over the past few months Netanyahu’s many admirers in Congress have been echoing and reinforcing the view that Iran is today’s Nazi Germany, and this depiction may have also carried some weight in American public opinion.

Last weekend perennial presidential candidate Mike Huckabee denounced the Iran agreement in terms that are directly from the Likud playbook. He described it as a deal which would “take the Israelis and basically march them to the door of the oven” – a reference to crematoria in Nazi concentration camps during the Holocaust.

On the last day of his African visit, at a stop in Addis Ababa, Ethiopia,President Obama was asked specifically about Huckabee’s assertion.

Obama said the comments from Huckabee, a former Arkansas governor, were “part of a broader pattern from Republicans,” the AP’s Julie Pace reported.

On “Hannity” Monday night, Cruz said that if President Obama’s nuclear agreement with Iran goes through, the Obama administration will become the world’s leading financier of radical Islamic terrorism.”

Huckabee, Cruz and other politicos represent the most extreme reactions to the nuclear agreement. But could the inflammatory rhetoric be turning the tide of American public support ?

While polls found strong evidence for American public support before the final deal was announced, and even majority American support in recent weeks, that support would appear to be waning. According to a CNN/ORC poll released Tuesday, 52% of Americans now want Congress to reject the nuclear deal with Iran, while 44% say lawmakers should approve it. A Washington Post-ABC News poll released just last week showed 56 percent supported the deal and 37 percent opposed it.

American Jews, for their part, appear to be divided. The LA Jewish Journal released the results of a telephone survey this week (taken a few days after the Iran deal was announced) that found 48 percent of American Jews support the deal while 28 percent oppose it — with 53 percent of American Jews saying Congress should approve the deal. Interestingly the same poll found that American Jewish support for the deal was 20 percentage points higher than for Americans overall (with 28% supporting the deal, 24% opposed and the rest undecided).

Scott Clement, writing in The Washington Post, observed that the Iran deal seems to find more support (in polls like the Post-ABC poll and Jewish Journal poll) when the poll is more specific about what the deal actually does ; polls that provide less detail in the questions (like the CNN/ORC poll and a Pew Research Poll published last week ) about the deal find greater numbers of people in opposition.

It is notable that former US ambassadors to Israel (chosen and known for their support of Israel) and former Under Secretaries of State pledged their strong support of the the deal in a letter to Congressional Leadership.

And it may come as a surprise to learn that within Israel itself there are some reasoned and reasonable voices calling on their fellow-citizens (and on the US electorate) to support the accord on the merits and not be swayed by bellicose rhetoric.

Among them is analyst Shemuel Meir who argued in +972 Magazine that the Vienna agreement “prevents the introduction of a new nuclear power in the Middle East, halts the nuclear arms race and saves Israel from using military force on Iran.”

And Uri Avnery, the ‘grand old man” of the Israeli peace movement, reminded his readers this week that it is Israel that is the Middle East’s first and dominant nuclear power. (Israel is one of four UN member states that have never joined the Treaty on the Non-Proliferation of Nuclear Weapons or NPT.)

“Netanyahu’s nightmare of an Iranian nuclear attack on Israel is just that – a nightmare (or daymare) of an ignorant dilettante. Israel is a nuclear power with a solid second-strike capability. As we see, the Iranian leaders are hard-boiled realists. Would they even dream of inviting an inevitable Israeli retaliation that would wipe from the face of the earth their three-millennia-old civilization? ”

While Avnery’s dismissal of Tehran’s nuclear arms ambitions might strike some as naive — they echo those of Bruce Riedel of the Brookings Institution: “The debate about the P5+1 agreement with Iran on its nuclear program has already produced a storm of angry rhetoric and a tsunami of opinion pieces. But one issue is notably absent from the debate: the fact that Israel has a nuclear weapons arsenal and sophisticated delivery systems that are decades ahead of anything Iran could develop in the foreseeable future. Iran should be constrained by a global regime from getting the bomb, but the notion that Israel is a weak powerless state like Czechoslovakia in 1938 is ludicrous.” (Read more)

One of the few Israeli experts who was looking at the details as they emerged during the negotiations is Avner Cohen, professor of nonproliferation studies at the Middlebury Institute of International Studies at Monterey and author of “Israel and the Bomb.” He wrote in Haaretz that the Iran nuclear deal “looks like a reasonable compromise” and that “the removal of the ‘Iranian threat’ can provide a huge positive impact on Israeli politics and on the quality of life in the country.”

Rabbi Eric H. Yoffie postulated in Haaretz on Monday that given the facts, Israelis would also support the Iran deal:

“Let’s assume that Israelis were given a choice between two more realistic options: A. No Iran deal, Iran relieved of almost all sanctions and free to operate its nuclear program without constraints, increased diplomatic isolation for Israel, and continued political tension with the United States or B. The Iran deal, supervision of Iran’s nuclear program for 10-15 years, close cooperation with the United States, a side agreement with America to assure diplomatic backing and military and financial support for Israel, and significant improvement of Israel’s position in the international community.”

No doubt Netanyahu and his Republican allies will continue to employ the “Munich 1938″ rhetoric — but let’s hope that cooler heads win the debate.