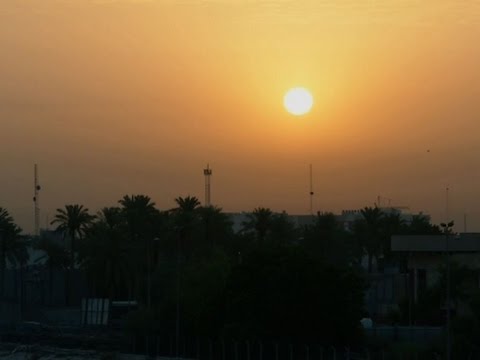 It seems extraordinary, but in a country where Daesh (ISIS, ISIL) has advanced to within an hour’s drive of the capital, Baghdad, civil politics there has not been paralyzed. Big demonstrations broke out on Friday.

Ordinary citizens are no longer willing to cut the Iraqi government, led by the Shiite Islamic Call Party (al-Da`wa al-Islamiya), any slack. A severe heat wave has suffocated the Middle East, with temperatures reaching 120 Fahrenheit and more (49 C.) in Baghdad, which one headline called the hottest city in the world this week. (Believe it or not, temperatures are headed a couple of degrees higher by Wednesday).

Iraqis who can afford it are forced to run gasoline-powered private generators just to keep refrigerators and air conditioners running.

The US and international sanctions put on Iraq after the Gulf War in the 1990s destroyed its economy and prevented the building of new power plants. The American administration of Iraq proved unable substantially to increase electricity production. Many of the overly high tech projects the US initiated fell into disuse because Iraqis did not have the training to keep them up, or because they were sabotaged by groups opposed to the US presence.

So when protesters planned demonstrations in downtown Baghdad they did not know how successful they would be.

To everyone’s surprise, thousands of demonstrators assembled in the sweltering heat in downtown Baghdad and in other cities in the Shiite South on Friday. In the southern port city of Basra, protests have been staged for the last couple of weeks. Police are accused of using live ammunition on the demonstrators, and they killed one young man.

The government tried and failed to close off roads leading to downtown Baghdad’s Liberation Square, where thousands assembled, chanting against corruption and lack of electricity and demanding the firing of Minister of Electricity Qasim al-Fahdawi. Pro-government pundits accused them of being infiltrated by saboteurs.

A spokesman for the Ministry of Electricity said that it was not solely to blame for the fiasco. Iraq’s electricity plants, he said, were built to use natural gas, but the country at the moment has a lack of gas. Further, he said, the Ministry of Petroleum is not providing enough fuel.

Iraq is said to need 37,000 megawatts of electricity, and has allegedly commissioned 27,000 MW worth of new production, but few Iraqis think that much power will actually materialize any time soon. The average Iraqi household only gets about 7 hours a day of electricity.

Why Iraq doesn’t put in solar panels everywhere I’ll never understand. They have plenty of places to put them, and they’d run virtually every day. Only 400 MW of new energy production plants will be renewables in the government’s 5-year plan.

In fact, this political crisis underlines the dangers of fossil fuels. People burn them to power their air conditioners, but they’re in the process just making it hotter and hotter in the future. The Iraqis should protest not just for more electricity but for more green electricity. Otherwise, they’re just going to make Baghdad even hotter.

AP from a couple weeks ago: “Raw: Iraq Declares Official Holiday Due to Heat”