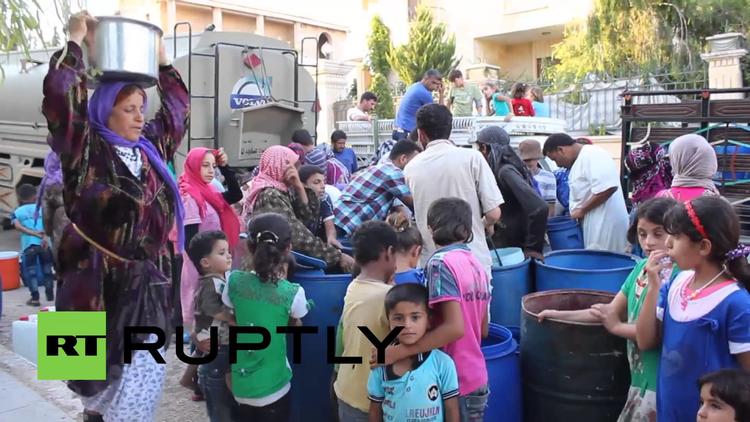 The United Nations on Tuesday said it has reason to believe that groups in the Syrian conflict are using the country’s scarce water supply as a weapon of war.

“There is increasing evidence that parties to the conflict are using water to achieve military and political gains,” the United Nations Children’s Fund (UNICEF) declared in a press statement.

According to the group, up to five million Syrians across the country have experienced “long and sometimes deliberate interruptions to their water supplies.” In the city of Aleppo, where fighting has reportedly “crippled” the main pumping station, some cuts have lasted over a month.

“Clean water is both a basic need and a fundamental right, in Syria as it is anywhere else,” said Dr. Peter Salama, UNICEF regional director for the Middle East and North Africa. “Denying civilians access to water is a flagrant violation of the laws of war and must end.”

Worsening the impact of the shortages, the people of Syria have also endured a weeks-long heatwave, with temperatures recorded over 110°F.

The lack of water has driven Syrians from their homes into the war-torn streets. According to UNICEF, fighting killed at least three children in recent weeks while they were out collecting water in Aleppo.

Further, the group warns, the cuts have forced families in Damascus, Dera’a, Aleppo, and other areas to “have to rely on dirty water from unregulated and unprotected groundwater sources, exposing children in particular to the risk of contracting diarrhoea, typhoid, hepatitis, and other diseases.”

In addition to the “deliberate” cut offs, fighting has exacerbated the shortages by causing severe damage to pipelines and other water infrastructure where workers are unable to carry out the repairs.

UNICEF estimates that 2.3 million people in Aleppo, 2.5 million in Damascus, and 250,000 in the southern city of Dara’a are suffering water shortages, and notes that the “misery is particularly acute for millions of displaced families” who have been forced into over-crowded refugee camps and shelters.