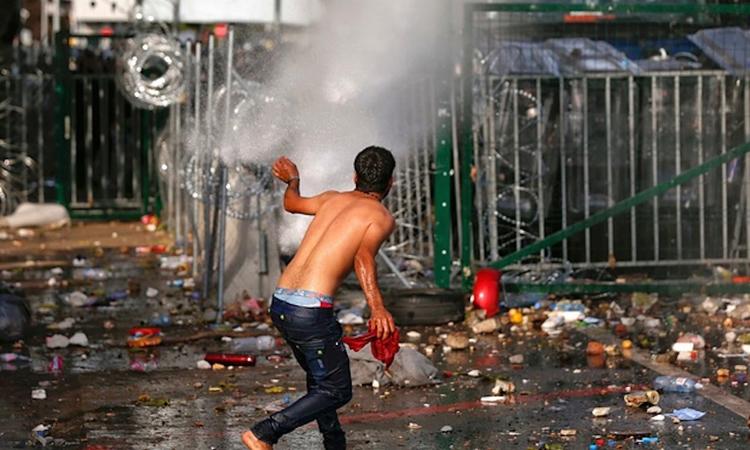 Imagine that 58 million Americans were streaming into Canada and Mexico, many with only a small satchel and the clothes on their backs. Picture another 102 million residents of the Eastern seaboard seeking refuge with relatives in the Midwest and West.

That terrifying mental exercise gives a sense of the sheer, staggering scale of the Syrian refugee crisis.

Half of Syria’s pre-war population of 22 million has been uprooted since the country’s horrendous civil war broke out in late 2011. Over 4 million people have escaped to neighboring countries and beyond, while an additional 7 million or so are displaced within the country.

UN officials believe these estimates are low, since many refugees never register with the authorities.

Numbers, of course, tell only part of the story. Every Syrian who flees the war is a human being who made an agonizing decision to leave home and now faces a deeply uncertain future. There’s no end in sight to the fighting in Syria and no coordinated international effort to resettle the refugees somewhere safe.

Syria’s neighbors have taken in millions of war-weary refugees — in Lebanon, in fact, an astonishing 1 out of every 4 people is a Syrian refugee.

But these host countries aren’t a permanent home. Jordan and Lebanon don’t allow Syrians to work, and Turkey has only low-wage, menial labor to offer. Foreign aid to house and feed the refugees is inadequate. That’s why thousands of destitute Syrians are now exhausting their savings paying unscrupulous smugglers to spirit them into Europe.

The journey is dangerous. In early September, the world was appalled by images of the little body of Alan Kurdi, a 3-year-old, washed up on a Turkish beach. The boy’s mother and older brother died too, drowned by waves too big for the rickety vessel carrying them across the Aegean Sea.

The Kurdis and countless others are victims of the Syrian regime and its armed opponents, to be sure — but also of the closed-border policies that almost all nations enforce.

In Europe, right-wing politicians manipulate the anxieties of workers in the precarious economy of the 21st century — and spew anti-Muslim racism — to keep refugees out. In Hungary, for example, President Viktor Orban is going ahead with plans to build a wall along the country’s southern border.

If that tactic sounds familiar, it should. Republican presidential candidates and their media mouthpieces are stooping lower and lower in their demonization of anyone — from Latinos to Syrians — seeking a better life here.

On September 8, for example, Fox News commentator Andrea Tantaros ventured her opinion that “taking Islamic refugees would be suicide,” because in her mind all Muslims are would-be terrorists. GOP members of Congress voice such revolting prejudice themselves when they insist on “vetting” each and every arrival from Middle Eastern war zones.

With all the hyperventilation, one would think Washington had rolled out the red carpet. But the United States has taken in fewer than 2,000 of Syria’s 4 million refugees since 2011.

The White House recently announced plans to admit up to 10,000 more next year. That’s a shamefully paltry figure. Aid organizations are calling on Washington to accept many times that number.

If Germany can take 800,000 and tiny Lebanon can receive over 1 million, surely the wealthiest country in the world can follow suit. European and Arab Gulf countries ought to step up as well. We can — and should — do much, much more to help refugees.

Chris Toensing is the editor of Middle East Report, published by the Middle East Research and Information Project in Washington, DC. MERIP.org
Distributed by OtherWords.org.

the Young Turks: “Syrian Refugees Fight To Get Into Hungary”