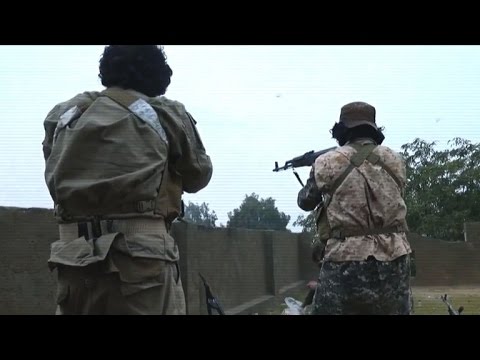 Evidence is mounting that [so-called] Islamic State (IS) [group] is using chemical weapons in Iraq and Syria – and yet this egregious crime, which once used to be a “red line” for the rest of the world, has yet to provoke a proportionate response.

One the most compelling accusations so far is a recent report that the terrorist group used mustard gas in Marea, a Syrian town near Aleppo. No-one was killed, but around 30 people were treated for severe chemical injuries. One of the victims was a five-day-old baby.

The United Nations is currently setting up an investigation into the attack, but given the seriousness of what may be a full-on chemical campaign, it all feels like too little, too late.

This is far from the first allegation that IS has used chemical weapons. In July 2014, there were reports of a chemical attack against Kurdish forces in Kobanê, Syria. IS is believed to have stolen the chlorine that was used in the strike from the Muthanna chemical facility near Baghdad in Iraq.

Then, in October 2014, Iraqi doctors and police officers investigated claims that IS used chlorine as a weapon in Dhuluiya, a town north of Baghdad. Witnesses reported a yellow smoke at the scene that made them faint and vomit. Experts pointed to water treatment plants in areas now under IS control that could provide a ready supply of chlorine.

In March 2015, Kurdish authorities claimed IS had used chemical weapons against peshmerga fighters outside the Iraqi city of Mosul. They showed a video of the attack. A truck billowing white smoke is seen being driven towards the Kurdish troops, which then explodes. The smoke makes the fighters extremely sick – all symptoms of chemical exposure.

In June 2015, poison gas was used in and around the Syrian city of Hasaka. Investigators could not confirm what chemical was used, but it was probably some type of agricultural agent. Around the same time, Saharan Research and Conflict Armament Research released a report stating that IS had used chemical munitions on 24 separate incidents in Syria.

IS then carried out a mustard gas strike in the Iraqi town of Makhmour in August 2015. The US has confirmed the attack. Investigations believe that the weapons used originated in Syria.

Two years ago, Bashar al-Assad agreed with the US and Russia to give up his chemical weapons stockpiles, which would then be destroyed. But a report has now found a massive gap between the volume of weapons declared and the ones that were actually eliminated, and it’s thought IS has got hold of at least some these unaccounted-for stockpiles. (Libya has also been suggested as a possible source.)

The details of the attacks may be murky, but the overall picture is clear: IS may well be starting to incorporate chemical warfare into its strategy. The fighting in Iraq and Syria has given the group numerous opportunities to get hold of these weapons and, if the allegations and evidence that have been gathered so far turn out to be accurate, it is now using them regularly.

So far, the unconfirmed attacks have been relatively small and claimed relatively few casualties – though if the group has got hold of major stockpiles, that could soon change.

End of the red line

Given all historical and legal precedent, you might expect IS’s apparent chemical attacks to be a major issue. Assad’s use of these weapons was enough for the US to threaten airstrikes against Syria. Surely then the spread of chemical arms to IS would be an important concern.

But the allegations against IS haven’t changed anything. No country has shown any serious interest in dealing with the IS-specific chemical issue head on, let alone come up with a response. And they won’t.

Whatever worthy pronouncements are made about how terrible chemical weapons are, we’ve yet to see any real action. Weapons of mass destruction may have been a good enough pretext for George W. Bush and Tony Blair, but given the lessons of Iraq and the chaos of the IS conflict, this isn’t the case now.

The world’s efforts to address the Assad regime’s chemical attacks, which spurred a diplomatic push to peacefully dismantle the stockpile, turned out to be shortlived. Assad continues to use chlorine to this day, and the US has not done anything to stop it. This is because Obama does not actually want to be involved, chemical weapons or not.

The same applies to IS. Where’s the incentive for the US to respond? Obama is far from keen to put “boots on the ground” in Syria or Iraq – and taking the alleged chemical attacks as seriously as he did the Assad stockpile only increases the pressure on him to intervene. No wonder he doesn’t want to talk about what’s happening.

As a result, a rash of likely chemical attacks appears to be being swept under the carpet. Unless there’s a “major” incident (whatever that would be) these will likely be ignored.

This is hypocritical at best. Whether we believe chemical weapons should be treated as distinct or not, having an inconsistent policy will not help bring an end to the conflicts in Syria or Iraq.