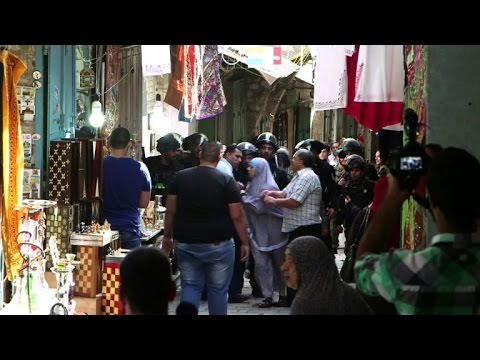 Ayman Abu Rumouz, a cameraman for Lebanon-based satellite channel al-Mayadeen, was assaulted inside a shop as he took shelter during the clashes, while another cameraman, Mustafa al-Kharouf, sustained a head injury and was detained.

Layali Ubeid, a reporter with Shabakat al-Quds (Jerusalem Network) was handed a summons order for questioning, while Christine Rinawi from Palestine TV was hit by shrapnel from a stun grenade.

Israeli police said they entered the hilltop compound to ensure that Palestinian youths did not harass Jews or tourists during the morning visiting hours.

“As the police entered the compound masked youths fled inside the mosque and threw stones at the force,” an Israeli police statement said.

Police said that five protesters were arrested in the compound and visits went ahead as planned.

Another four were arrested in skirmishes between security forces and protesters in the surrounding alleys of Jerusalem’s Old City. Police fired stun grenades while hitting and kicking demonstrators and journalists as they sought to push back crowds.

An AFP journalist outside the gate saw a Jewish visitor leaving the compound scuffle with Muslims outside.

‘We are not terrorists’

Palestinian protesters fear Israel will seek to change rules governing the site, with far-right Jewish groups pushing for more access to the compound and even efforts by fringe organisations to erect a new temple.

“Some of the young men have been sleeping inside the compound for two or three days to defend it,” Umm Mohammed, a 50-year-old among dozens of women protesting outside the gates of the Al-Aqsa compound, told AFP.

“We are protecting Al-Aqsa. We are not terrorists.”

Non-Muslim visits to the site increase during Jewish holidays, with some 650 visitors on Sunday, according to police. Another 500 visited on Monday during the 7:30 am to 11:00 am visiting hours, police said.

In clashes on Sunday, Muslim witnesses said police entered the mosque and caused damage. Police said only that they closed its doors to lock in rioters throwing stones, fireworks and other objects.

Israeli security forces have used the same tactic in the past to restore calm and which has seen them briefly enter the mosque.

President Mahmoud Abbas condemned Sunday’s raid, saying sites such as Al-Aqsa constituted a “red line” and adding that “we will not allow attacks against our holy places”.

Netanyahu however said “it is our responsibility and our power to act against rioters to allow freedom of worship at this holy place.” He said Israel would act “to maintain the status quo and order” at the compound.

Following Israel’s occupation of East Jerusalem in 1967, Israel has maintained an agreement with the Islamic trust that controls the Al-Aqsa compound not to allow non-Muslim prayer in the area.