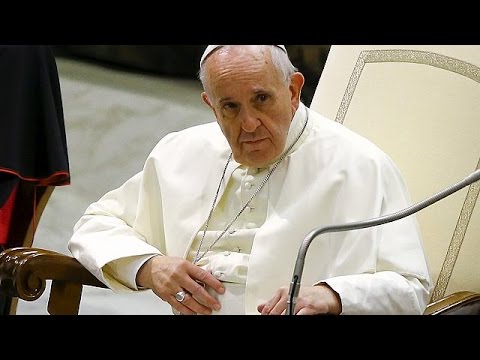 Not all American Christian leaders have covered themselves in glory when it comes to the issue of Syrian refugees being accepted by the US ( not many are). Evangelist Franklin Graham sees these refugees as a security threat because many of them are Muslim (though there are lots of kinds of Islam in Syria, and some 5% are Christian). Sen. Rand Paul, who mixes some evangelicalism into his libertarianism, has expressed similar sentiments. And, of course, GOP frontrunner Donald Trump has shouted himself blue in the face about the alleged danger of Middle Eastern and other immigrants coming to the US; while he is not on the religious Right, he tries to please that wing of the party.

It seems to me that there is a real question as to whether any of those who speak in such hateful ways are actually Christian at all.

In an astonishing show of solidarity with the refugees thronging into Europe, on Sunday Pope Francis called on European parishes and other Catholic institutions to take in a refugee family each. He said,

“”May Every parish, every religious community, every monastery, every sanctuary of Europe, take in one family.”

He made the call during his weekly Sunday Angelus address, held at noon, which ends with the recitation of the devotion beginning with the verse “the Angel of the Lord declared unto Mary . . .” in commemoration of the mystery of the incarnation.

He reminded the faithful of the upcoming Jubilee Year of Mercy in this regard.

“Before the tragedy of tens of thousands of refugees fleeing death in conflict and hunger and are on a journey of hope, the Gospel . . . calls us to be close to the smallest and to those who have been abandoned”.

Father Federico Lombardi SJ, Director of the Vatican Press Office, explained that Pope Francis wants his call to reach the “whole of Europe” and not just a few localities. Moreover, he is asking that Catholic communities take the lead in welcoming the refugees during this crisis point, engaging in “concrete works of charity” and not just “organizational or logistic preparations”. Moreover, Father Lombardi said, the Pope is calling on entire parish communities to implement this instruction, not just on the priests.

The immediate need is for resettling 160,000 refugees. Italy alone has 25,000 parishes, and if each family had five members and each parish took one in, that would take care of 125,000 right there. Of course, it is not clear how many parishes will rise to the pope’s challenge, and the European Union will play a role in deciding how the refugees will be distributed.

Most of the refugees are Muslims, and right wing Hungarian Prime Minister Viktor Orban said last week that because of resentments over the legacy of the Ottoman Empire (which ruled much of eastern Europe), his country could not take any Muslim refugees. The major religion in Hungary is Catholicism, however, and Pope Francis (a man of the New World) clearly is pushing back against European Christian nativism of that sort, which is pretty ugly.

People forget when discussing the story of the Good Samaritan as told by Jesus that Samaritans belonged to a separate but related religion from Judaism (Samaritanism), so the help the Samaritan offered was being given to a Jewish outsider, not a coreligionist:

29 But he, desiring to justify himself, said to Jesus, “And who is my neighbor?” 30 Jesus replied, “A man was going down from Jerusalem to Jericho, and he fell among robbers, who stripped him and beat him, and departed, leaving him half dead. 31 Now by chance a priest was going down that road; and when he saw him he passed by on the other side. 32 So likewise a Levite, when he came to the place and saw him, passed by on the other side. 33 But a Samaritan, as he journeyed, came to where he was; and when he saw him, he had compassion, 34 and went to him and bound up his wounds, pouring on oil and wine; then he set him on his own beast and brought him to an inn, and took care of him. 35 And the next day he took out two denarii[a] and gave them to the innkeeper, saying, ‘Take care of him; and whatever more you spend, I will repay you when I come back.’ 36 Which of these three, do you think, proved neighbor to the man who fell among the robbers?” 37 He said, “The one who showed mercy on him.” And Jesus said to him, “Go and do likewise.” ‘

The Muslims are the victims in the parable of the good Samaritan in today’s Europe; will its Christians step up to Jesus’ challenge?

Pope Francis instead referred to the story of Jesus healing the deaf and mute man, which he said symbolized the human inability to understand the word of God, which I take to be his slam against the anti-immigrant right wing.

Radio Vatican explained, “Jesus healed the man and – the Pope said – “unblocked” his capacity to enter into communication with others and with God. This story – he explained – speaks of us because we too are often inaccessible and closed within ourselves.”

I think Viktor Orban and Franklin Graham just got pwned.

Euronews: “Pope calls on every parish in Europe to take in one migrant family each”