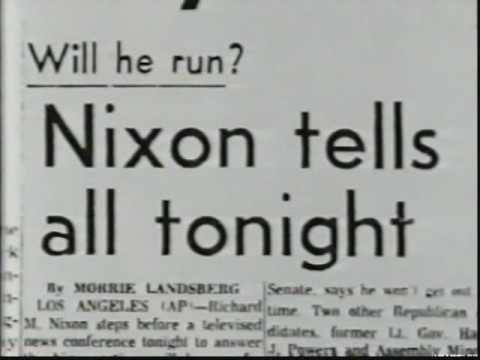 The latest Republican presidential primary debate had it all: denunciations of President Obama, angry rants about America’s future, and all manner of bile. It seems like a new low – but in reality, Republican candidates have been singing this tune for years.

In the fall of 1962, Richard Nixon lost a bitter, divisive campaign against the incumbent Governor of California, Pat Brown. Furious and stunned, he was not in the best shape to hold a press conference. His press secretary wanted him to be magnanimous and statesmanlike, but Nixon could hardly control his anger and contempt.

Stuttering with resentment, he drenched the 100 reporters on hand at the Beverly Hilton Hotel with sarcasm: “For 16 years, ever since the Hiss case, you’ve had a lot of fun, uh, a lot of fun. You, you, you, you’ve had an opportunity to, to uh, attack me, and I think I’ve given as good as I’ve taken.”

Then, he delivered his parting shot, with a nervous smile that was as much a grimace: “But as I leave, uh, I want you to know, just think how much you’re going to be missing. You don’t have Nixon to kick around any more.”

Ever since then, conservative politicians have led a victimhood parade of cranks, conspiracy theorists, and anti-intellectuals. Nixon may have been the most hardcore of the lot, but others merely picked up where he left off. Presidential candidates Barry Goldwater in 1964, George Wallace in 1968, and Ronald Reagan in 1980 implored and sometimes convinced voters to doubt or reject the wisdom of elites.

With the 2016 presidential primary campaign now at full throttle, the legacy of that angry populist wisdom seems more powerful than ever.

Today, communists are no longer hiding under every rock or bed, but Republicans, masters of the paranoid style, have plenty of targets to fit the pattern: journalists, Mexican immigrants, climate scientists, unions, academics, treacherous politicians, or gun control advocates.

White politicians and activists are driving a great deal of the political conversation, to the joy of voters who feel beset by forces out of their control. The language of embattlement runs through these circles like a raging river.

Conservative Christian candidates such as Mike Huckabee, Scott Walker, Rick Santorum, and now even Donald Trump pander to the base with apocalyptic denunciations of political correctness and screeds about the dangers that whites and Christians face.

Some of this bile is relatively new, oozing out of the “birther” or Obama-is-a secret-Muslim swamp that first started fermenting in 2008. But as the historian Rick Perlstein suggested nearly a decade ago: “Conservative culture was shaped in another era, one in which conservatives felt marginal and beleaguered. It enunciated a heady sense of defiance.”

And today, this defensive, distrustful mindest is in full flower.

The A-Team fights back

The Grand Old Party hosted its latest banquet of disenchantment at the Ronald Reagan Library in Simi Valley, California, on September 16. Nearly 53 years after Nixon’s snippy remark about getting kicked and abused, the spirit of embattlement is still strong. The liberal media still can’t be trusted.

“Donald Trump’s being in this race,” quipped Ted Cruz, the junior US Senator from Texas, “has forced the mainstream media finally to talk about illegal immigration.”

Then, between barbs aimed at the gallant, anti-immigrant frontrunner, who celebrates mammon and denigrates women with equal zeal, the candidates at the Reagan Library were eager to convince Americans that an overbearing government and a traitorous president had ruined their country and abused them. The kicking must stop.

Former Arkansas governor Mike Huckabee, a veteran of the 2008 primaries, was ready and able to stand up for the downtrodden. Huckabee has a special skill for demagoguery and martyrdom, and has recently made a rabbit’s foot out of Kim Davis, a Kentucky clerk who refused to do her job and issue marriage licenses to same-sex couples.

“I know that there are some in the Wall-Street-to-Washington axis of power who speak of all of us contemptuously,” he assured the hungry audience. “But I’m here to say that I think we are, in fact, the A-Team.”

That would be true only if the plot of the schlocky 1980s TV show involved renegades roaming the country, nurturing grudges, and speaking untruths to the already powerful.

From the debate stage, former Florida governor Jeb Bush tried to stake out some kind of middle ground, with an eye on his viability for the general election in November 2016. In doing so, he strayed far from the Tea Party hymn sheet of poisonous outrage, waxing romantic about sunny Reaganism.

“Are we going to take the Reagan approach, the hopeful optimistic approach, the approach that says that, you come to our country legally, you pursue your dreams with a vengeance, you create opportunities for all of us? Or the Donald Trump approach?” The latter was the “approach that says that everything is bad, that everything is coming to an end.”

Surely the answer the Republican base prefers at this moment is option B.

The base is animated not by optimism or hope, but by bitterness and longstanding grudges. Blinded by rage at the left and centre, its stalwarts will believe almost anything that fits their sense of embattlement – no matter the reliability of its source. The physicist Karl Giberson and I wrote a book about the preference for renegade experts and anointed leaders with dubious or no credentials.

The modern right’s ideological alchemy has already turned Kim Davis into a latter-day Rosa Parks, the founding fathers into born-again evangelicals, climate science into a hoax, and Reagan’s outlandish and discredited “voodoo economics” into the only way America can get back on track.

On the latter point, incidentally, the right’s partisans might pay heed to how slash-and-burn tax cuts have worked out in my home state of Kansas. As of April, the Republican governor Sam Brownback’s land of Oz needed $400m to close the deficit.

Since July, pundits have been variously marvelling and panicking at the surprising rise and continued rise of Donald Trump – but really, it makes perfect sense. The party that cultivated the politics of outrage and bolstered stubborn anti-intellectualism is racing to the bottom of a bottomless pit.

The frontrunner (for now) is a Frankentrump of the GOP’s own creation. He is the embodiment of decades of anger, antipathy, and anti-establishment hostility.