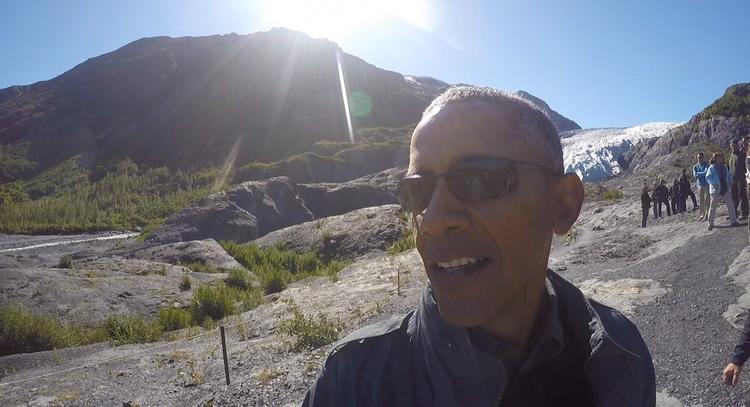 American corporate news has not devoted the hours to President Obama’s trip to Alaska that it deserves, focusing on the GOP clown car back in the lower 48 instead. I did a Lexis Nexis search under Arctic Summit (yes, there was one, which Obama attended) in “Broadcast News Transcripts” and I got, I swear eleven hits beginning last Sunday.

I visited Alaska for a conference a few years ago, and drove down with a friend to see the Portage Glacier. It had begun moving in 1850 and had left behind a lake as it headed toward a nearby mountain range. For a historian of modern climate change, the 1850 date is significant. That is when we typically mark the end of the “Little Ice Age” of the late medieval and early modern period, roughly 1350-1850. We came out of this period of slightly increased glaciation in Europe because early forms of industrialization involved the burning of a great deal of wood and then coal in the 18th century, so that by 1850 we had put a bit more carbon dioxide into the atmosphere. And at that point, the Portage Glacier began melting, leaving a lake behind it over time. The lake’s birth date was 1850, the year many consider the beginning of a new geological era, the Anthropocene that succeeded the Holocene. The Anthropocene is the era in which the earth’s climate is dictated for the first time by human beings, not by volcanoes, sunspots, shape of the earth’s orbit and other astronomical phenomena, and bacteria.

The Portage Glacier is only one of many natural features now changing in Alaska. The reason Obama went to the state is that it is at the forefront of the climate change crisis. Here are the climate problems it is facing according to the Environmental Protection Agency:

1. The rate of warming in Alaska during the past 50 years has been twice as much as in the lower 48! Winters are 6.3°F warmer now than in 1965 when the Beatles’ “Yesterday” spent 4 weeks at the top of the charts. Summers are also warmer but less dramatically so, with a 3.4°F increase.

2. The future is even more striking. Average annual temperatures could increase again by as much as 4°F – 7°F by 2050!

3. Alaska’s forests are at risk from drought, wildfire and insect attacks. Already, Alaska’s spruce forest has been extensively reduced because of fire and insects. The EPA warns, “By mid-century, the average area burned by wildfire each year is likely to double.” Also, many evergreen trees are leaning over because the soil is warming and loosening, producing “drunken forests.”

4. The permafrost is melting. The EPA explains, “Permafrost is the frozen ground located one to two feet below the surface in cold regions.” When the permafrost melts, your house sinks. About 100,000 of the 736,000 Alaskans live in areas where their dwellings will be harmed by permafrost degradation.

5. When permafrost thaws and then freezes again (as opposed to staying frozen) it damages the landing strips, roads and rail lines built atop it. Many roads won’t take vehicle traffic except when the permafrost is frozen solid, since otherwise they buckle. The EPA says, “In the past 30 years, the number of days when travel is allowed on the tundra has decreased from 200 days to 100 days per year.” What? You can only travel on those roads a third of the year now? And this change since 1965?

6. Building infrastructure on melting permafrost will increase costs by 10% or more.

7. Coastal erosion is a big problem, what with rising seas and declining (and poorly named) perennial sea ice. On the state’s northwestern coast, some shorelines are receding at rates “averaging tens of feet per year.” In many native Alaskan villages up there, houses have collapsed into the sea and some villages have already had to relocate.

8. Native Alaskans are facing something like the official definition of genocide, only at the hands of oil, gas and coal instead of at the hands of an invading army. Climate change is reducing habitats for fish and for caribou, seals, walruses and polar bears, which are declining in population. Native Alaskans hunt this game and engage in fishing, but their livelihood is at extreme risk going forward.

9. As an example of threats to game, Alaskan caribou like to eat lichen, which grows on permafrost. As the permafrost melts, the lichen is being replaced by shrubs, which the caribou can’t eat. Wolves, bears and native Alaskans in turn depend on hunting caribou.

10. Alaska’s lakes are shrinking because the permafrost is thawing and more water is evaporating at the higher temperatures, reducing breeding grounds for birds that summer at them. Again, those birds and the declining fish stocks in the lakes are food for native Alaskans, food that is becoming scarcer.

White House: “President Obama at the Signpost of Climate Change”