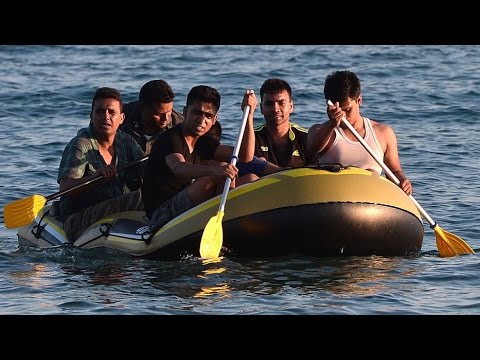 The unfolding refugee crisis has been marked by stories of displacement, violence and despair. There have been frenzied debates about the appropriate responses, compassion and humanitarianism.

Those following what is being referred to as the worst refugee crisis in decades will undoubtedly be familiar with the generosity and empathy shown in Germany, and the ever-increasing public pressure faced by David Cameron over the number of refugees Britain will accept.

They will also have seen pictures of the expanding refugee camp in Calais, and the frantic scenes at Keleti station in Budapest, as well as the distressing image of three year-old Syrian Aylan Kurdi who drowned while trying to reach the Greek island of Kos with his family.

Yet there is an additional dimension to this refugee crisis that is only just beginning to emerge. In some Western countries and among some parties, it appears that refugees are no longer perceived as one homogeneous group deserving of sympathy and asylum. Instead, what is gradually emerging is an emphasis on religion rather than common humanity, with a preference being shown for Christians over Muslims.

Numerous Australian politicians, for example, have voiced a desire to prioritise Syrian Christian refugees due to the levels of persecution they experience in the Middle East. In Europe, Hungary’s prime minister, Viktor Orban, has expressed concern that too many Muslim refugees would threaten Europe’s Christian roots. Slovakia has announced that it will only accept Christian refugees, arguing that Muslims would not be able to integrate in what is a predominantly Christian nation.

This quest to welcome only refugees who are “culturally similar” has rightly been deemed discriminatory by many. Yet while this pro-Christian and anti-Muslim bias cannot be condoned, its presence should perhaps not be surprising.

Muslim minority communities and Islam as a creed have received a great deal of attention in the post-9/11 world. Across the West, Muslims have been placed centre stage in deliberations regarding national identity, integration, and the professed failure of multiculturalism. They are the focus of fear and anxiety about cultural tensions, a breach of Western values, and terrorist plots and attacks.

The result has been a plethora of government initiatives focusing on integrating and accommodating them. It should not have been entirely unforeseen that these apprehensions would spread into the debate about the refugee crisis.

This religious bias will have long-term consequences that stretch beyond the immediate fate of the refugees. A preference for Christians stems from a general unease about Muslims but it is also likely to further fuel anxiety.

Far-right politicians are more than happy to exploit anti-Muslim sentiment for their own benefit and have already done a good job of drawing people to their cause.

We must also ask ourselves what kind of message this anti-Muslim bias is sending to settled Muslim minorities across the Western world? Islamophobic victimisation and hostility, already part of everyday life for many, could potentially become more widespread and severe.

And giving preference to Christian over Muslim refugees has profound consequences for the West. It calls into question the very essence of a modern liberal democracy grounded in Christian values. In what is a fractured European Union, this religious bias pursued by some member states constitutes an additional layer of disharmony.

It casts doubt over quotas, a common immigration policy and the free movement guaranteed by the Schengen Agreement. Whilst this religious favouritism may not have received the media and public attention it deserves, some of the refugees have heard the message loud and clear. Despite Germany’s welcoming attitude and Angela Merkel’s assurance that Islam “belongs to Germany”, Iranian and Afghan Muslim refugees have been converting to Christianity in Berlin over recent weeks.

Regardless of the reasons and motivations, it is clear that Western countries need to carefully think through their positions on Muslim refugees as well as how these are perceived further afield. Not only do they have deep ramifications for the desperate, and often frustrated, refugees themselves, but also for old and new Muslim minorities, and future Western-Muslim relations.

TheLipTV from last month: “Slovakia Will Only Accept Christian Migrants”