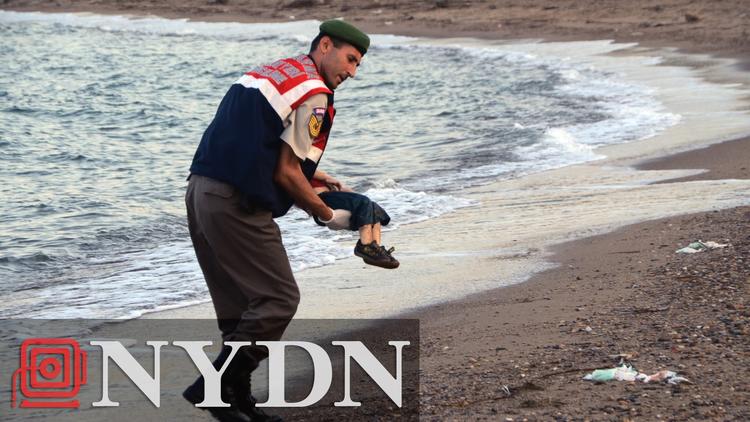 I thought long and hard before I retweeted the photo. It shows a lifeless toddler, lying face down on a popular Turkish beach, one of eleven Syrians who have almost certainly died as they tried to reach safety in Europe by boarding a smuggler’s boat. Instead they ended up as the latest victims of Europe’s paltry response in the face of a growing crisis.
A man carries the body of a dead Syrian boy who died at sea.

What struck me the most were his little sneakers, certainly lovingly put on by his parents that morning as they dressed him for their dangerous journey. One of my favorite moments of the morning is dressing my kids and helping them put on their shoes. They always seem to manage to put something on backwards, to our mutual amusement. Staring at the image, I couldn’t help imagine that it was one of my own sons lying there drowned on the beach.

I am currently in Hungary, documenting the journeys of Syrian refugees, the very journey that today took another young life. It’s easy to blame the parents for exposing their son to such deadly danger, but only if you forget the barrel bombs and Islamic State (also known as ISIS) beheadings that they are fleeing. All morning yesterday at the Serbian-Hungarian border, I saw Syrian parents determinedly walking with their children – trying to remove them from the horrors of the slaughter in Syria, which have been allowed to continue for four years, and to the promise of security in Europe. Those parents are heroes; I admire their sheer determination to bring their children to a better life.

Sadly, all along the journey, they are faced with hurdles and hostility. Some smugglers are so organized they even give receipts for their criminal business, but they care little for the lives of those they transport and make fortunes from. Their brutality may be expected, but what is inexcusable is the indifference and obstacles placed in their path by Europe’s leaders.

Almost every Syrian I have interviewed has had a close brush with death on their journey, often involving sinking boats. Now, in Hungary, they find their path blocked again, with thousands made to sleep in the streets without any help from the Hungarian authorities.

My notebooks are full of tragedy. Ali Pintar, a Syrian Kurd, fled with his three children after ISIS tried to take control of his hometown of Qamishli by sending suicide car bombs into the town. He has his train tickets to Munich, but police are preventing him from even entering the train station, so he has been sleeping rough for the last three nights with his children. He is utterly dejected, telling me of the humiliation he has faced: “It would have been better to stay in Syria. There, you only die once when there is an explosion or something. Here, I feel like I die a thousand deaths each day.”

Some say the picture is too offensive to share online or print in our newspapers. But what I find offensive is that drowned children are washing up on our shorelines, when more could have been done to prevent their deaths.

It was not an easy decision to share a brutal image of a drowned child. But I care about these children as much as my own. Maybe if Europe’s leaders did too, they would try to stem this ghastly spectacle.