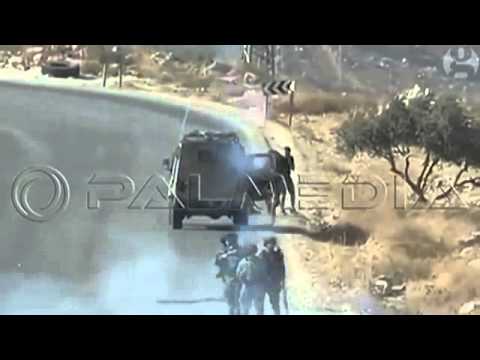 Two AFP journalists were assaulted Friday by Israeli soldiers who destroyed and seized their equipment in the occupied West Bank, after the funeral of a Palestinian killed by the army.

A video journalist with the agency, Italian Andrea Bernardi, was thrown to the ground and jabbed in the side with a weapon, AFP reports.

He was held on the ground by a soldier, one knee compressing his chest, until he managed to show his press card.

Bernardi suffered bruised ribs and an injury under the eye.

Israeli soldiers pointed their weapons at him and his colleague, Palestinian photographer Abbas Momani.

At the time both journalists were wearing body armor clearly marked “Press.”

The incident was filmed and posted online by a local production company.

The pair had been covering clashes between Palestinians and Israeli forces when some troops took them aside, swore at them in English and told them to stop recording events.

AFP has protested to the Israeli military over the incident and said it intends to file an official complaint.

“Disciplinary measures will be taken,” army spokesman Colonel Peter Lerner told the agency. “The highest levels of command are aware of the incident,” he said, specifying that this includes the head of Israeli forces in the occupied territory.

In an incident on April 24, the Palestinian AFP photographer manhandled Friday and a Palestinian colleague had stones thrown at them by Israeli soldiers.

That incident was also filmed, and the army announced that disciplinary action would be taken against the soldiers involved.

Friday’s clashes between Palestinians and troops at Beit Furik came after the funeral of Ahmed Khatatbeh, 26.

He died of his wounds after being shot three times by Israeli forces near the Beit Furik checkpoint in Nablus. The army said he and another man had thrown a petrol bomb at a vehicle on a road to the Jewish settlement of Itamar.

The Foreign Press Association (FPA) and Reporters Without Borders have alleged in the past that Israeli forces deliberately target press covering demonstrations.

Earlier this year, the FPA also condemned alleged Israeli targeting of journalists the 2014 Gaza war, where at least 17 journalists were reported to be killed by Israeli forces.

2014 was the deadliest year for journalists in the West Bank and Gaza and saw a record number of violations against media freedoms, according to documentation by the Palestinian Center for Development and Media Freedoms (MADA).

MADA chairman Dr. Ghazi Hanania in March described last year as the “the worst, the deadliest, and the hardest year ever for journalists and media freedoms in Palestine, in terms of the nature and degree of the violence suffered by journalists and media freedoms, and in terms of the number of crimes and violations committed, which rose at a record pace and unprecedented.”

Around three-quarters of violations were carried out by Israeli forces — 112 in Gaza and 239 in the West Bank — the rest by Palestinian security forces.

Based on the figures, Israeli violations increased by 132 percent compared to 2013, while violations by Palestinian security forces in both Gaza and the West Bank increased by 46 percent.