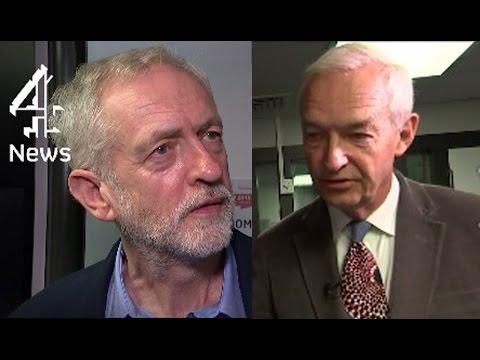 BETHLEHEM (Ma’an) — The election of Jeremy Corbyn as leader of Britain’s opposition Labour Party on Saturday quickly led to condemnation from the Israeli press who branded the veteran left-winger “anti-Israeli” and raised allegations of antisemitism.

The 66-year-old socialist was named leader after clinching a landslide 59.5 percent of the votes cast by Labour members.

The newly-elected chief — the nation’s most left-wing political leader for over 30 years — ran on an anti-austerity platform, slamming the incumbent Conservative party for presiding over “grotesque levels of inequality” and “an unfair welfare system.”

He said during his victory speech that Labour was “united and absolutely determined in our quest for a decent and better society that is possible for all.”

Foreign policy played an important role in Corbyn’s campaign, with the left-winger opposing British air strikes in Syria, pledging to apologize for Britain’s part in the Iraq war, and demanding that Britain take in more Middle East refugees.

He has called for scrapping Britain’s nuclear weapons and expressed commitment to Middle East peace talks.

He has also been a staunch critic of Israeli policies considered illegal under international law, and has suggested involving Hamas and Hezbollah in negotiations.

“Peace in the Middle East can only be achieved through justice for the people of Palestine,” he has previously written on his website. “The occupation, wall and assassinations are no solution.”

Israeli newspaper the Jerusalem Post reported that Corbyn has specialized in “fierce and often very direct criticism of Israeli policies,” claiming that “his contribution to foreign affairs debates include diatribes about the behavior of Israeli troops or abuses of Palestinian human rights.”

The Times of Israel labelled him “one of the British MPs most hostile to Israel.”

Both newspapers drew attention to Corbyn’s meetings with Raed Salah, leader of the Islamic Movement’s northern branch in Israel who has been accused of antisemitism, as well as with a pro-Palestinian activist who later denied the Holocaust.

However, Corbyn has said that the activist had not denied the Holocaust when they met 15 years ago, while Salah did not espouse any antisemitic views during their meeting.

Corbyn has also repeatedly said that Holocaust denial is “vile and wrong,” while a group of Jewish critics of Israel in Britain has argued that “Corbyn’s parliamentary record over 32 years has consistently opposed all racism including antisemitism.”

A Jeremy Corbyn supporter holds a placard as she awaits the start of the leadership result in London, on September 12, 2015. (AFP/Ben Stansall)

The newspaper said: “At heart, he is a full-paid member of every fashionable cause of the radical-left, including his unquestioning support for Holocaust deniers and blood libelers — as long as they’re ‘pro-Palestinian.'”

The newspaper accused Corbyn of holding vague and ambiguous foreign policy positions, adding that his victory either suggested Labour members “agree with him on this, or more likely, the majority of them simply don’t care.”

Corbyn has long criticized Israel policy and “the running sore of the illegal occupation of Palestine.”

He has condemned Israel’s separation wall, military incursions into occupied territory, targeted assassinations, and mass detentions, writing: “A policy that has failed, and will fail, cannot bring peace or security to Israel or justice for the Palestinian people.”

According to Palestinian news blog, Electronic Intifada, Corbyn supports key elements of the Boycott, Diversify and Solidarity (BDS) campaign, and would seek to impose a two-way arms embargo on Israel if he were to become prime minister in 2020.

The new Labour leader’s first public engagement following his victory Saturday was to take part in a pro-refugee demonstration in central London that was attended by thousands.

He called on British Prime Minister David Cameron to show more “compassion” in dealing with the Syrian refugee crisis.

“Let’s deal with the refugee crisis with humanity,” he told supporters in the British capital, amid mounting international concern over those fleeing war-torn Syria and risking their lives to escape.

Tony Blair — Labour’s most electorally successful leader who is now deeply unpopular over the Iraq war — has warned that Corbyn’s victory would split Labour and consign the party to electoral oblivion.

Corbyn, however, won the Labour crown by a more impressive margin than Tony Blair, who won 57 percent support at his leadership contest in 1994.

Corbyn drew strong support from students who had never voted before to older people disillusioned with Labour since it moved to the center-ground of British politics under Blair in the 1990s and led the country into the controversial 2003 Iraq war.

Speaking at Saturday’s pro-refugee demonstration, Corbyn told the crowds: “Surely, our objective ought to be peaceful solutions to the problems of this world. To spend our resources on helping people not injuring people.

“To try to bring back that world of decency, human rights and justice.”