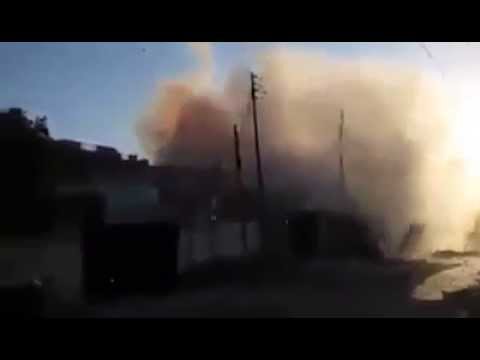 (Washington) – Iraqi government-backed militias carried out widespread destruction of homes and shops around the city of Tikrit in March and April 2015 in violation of the laws of war, Human Rights Watch said in a report released today. Militiamen deliberately destroyed several hundred civilian buildings with no apparent military reason after the withdrawal of the extremist armed group Islamic State, also known as ISIS, from the area.

The 60-page report, “Ruinous Aftermath: Militia Abuses Following Iraq’s Recapture of Tikrit,” uses satellite imagery to corroborate accounts of witnesses that the damage to homes and shops in Tikrit, and the towns of al-Bu ‘Ajil, al-Alam, and al-Dur covered entire neighborhoods. After ISIS fled, Hizbollah Battalions and League of Righteous forces, two of the largely Shia pro-government militias, abducted more than 200 Sunni residents, including children, near al-Dur, south of Tikrit. At least 160 of those abducted remain unaccounted for.

“Iraqi authorities need to discipline and hold accountable the out-of-control militias laying waste to Sunni homes and shops after driving ISIS out. Abusive militias and their commanders acting with impunity undermine the campaign against ISIS and put all civilians at greater risk.

Ahead of the campaign, Shia militia leaders had promised revenge for the June 2014 massacre by ISIS of at least 770 Shia military cadets from the Camp Speicher facility, near Tikrit. In videos of home demolitions, Shia militiamen curse Sunni residents and invoke Shia slogans.

The militias are part of the Popular Mobilization Forces, consisting of several dozen Shia militias, which the government created in response to the rapid ISIS advance across Nineveh and Salah al-Din provinces in June 2014.

The militias receive government salaries and weaponry but act in loose coordination with one another and with the Iraqi army and other security forces. On April 7, the Iraqi cabinet recognized the Popular Mobilization Forces as a distinct security force under Prime Minister Haider al-Abadi’s command.

Satellite imagery corroborated witness accounts that destruction of buildings occurred primarily after pro-government forces had routed ISIS and the Iraqi army left the area to militia control. Damage from government and US-led coalition airstrikes and artillery or by ISIS during its nine-month rule prior to March was limited.

In one example, Iraqi troops and Shia militias recaptured al-Dur, a town of about 120,000 people 20 kilometers south of Tikrit, without a major battle on March 6, residents told Human Rights Watch. The army withdrew a day later, leaving the town in the hands of the militias. Almost all residents had fled under ISIS or shortly before government forces retook the town. On March 8, Al-Ittijah Channel broadcast footage of Hizbollah Battalions entering the town and defusing ISIS-planted explosive devices and showing al-Dur’s main street, roundabout, and other locations largely intact.

But when local policemen returned to duty in early April they compiled a list of over 600 torched or exploded homes and shops. Satellite imagery taken in May shows large swathes of al-Dur residential areas destroyed. Sheikh Malik Shahhab, a prominent businessman and brother of al-Dur’s mayor, told Human Rights Watch that a member of the Popular Mobilization Forces boasted, “We burned and destroyed al-Dur, because they [the residents] are ISIS and Baathists.”

On March 8, Shia militias and local volunteer fighters retook the town of al-Alam, about 12 kilometers northeast of Tikrit, with a population of about 60,000. Human Rights Watch collected photographs and witness accounts for 28 buildings torched or blown up after the recapture of al-Alam. Some of this destruction is visible on satellite imagery, which shows 45 buildings that had been destroyed in March and April after militia forces captured al-Alam. Local Sunni volunteer fighters who had opposed ISIS control and who were operating under Shia militia protection were responsible for the destruction in al-Alam.

The battle for the city of Tikrit, 180 kilometers north of Baghdad with a peacetime population of about 150,000, lasted from early March until April 1, when Prime Minister al-Abadi declared victory, although sporadic fighting continued. Residents told Human Rights Watch that heavy fighting was largely restricted to the northern Qadisiyya neighborhood, where several hundred homes had been destroyed after militias had routed ISIS.

In Tikrit, militias also engaged in significant looting. Muhammad Jasim, a businessman who runs a large appliance store, showed Human Rights Watch photographs of militias looting and torching his store. In one video, shot on March 31, a white truck is visible in front of Jasim’s store while men in fatigues load up appliances.

Witnesses said Shia militias also carried out apparent extrajudicial killings in Tikrit. A local policeman said that when he patrolled an area of the Qadisiyya neighborhood in early April, he saw two dozen ISIS fighters surrender to Badr Brigades, another Shiite militia, and the League of the Righteous because they were out of ammunition and food. The policeman said he then saw militia members execute some ISIS prisoners on the street. On April 3, Reuters correspondents reporting from Tikrit said they witnessed Federal Police officers stabbing to death a suspected ISIS fighter.

As the biggest contributors to Iraq’s military and security forces, the US and Iran should speak out against militia abuses and make clear that the government is responsible for stopping these abuses and holding those responsible accountable, regardless of rank, Human Rights Watch said. All countries providing military assistance to Iraq should strengthen end-use monitoring of equipment and human rights vetting of recipients, including by publicly reporting on investigations into misuse of assistance and steps taken to address it. These states should support establishing centralized command and control with civilian oversight over the militias and hold those responsible for laws of war violations accountable. Failure by Iraq to do so within one year should lead to suspensions of assistance commensurate with Iraq’s failure to comply.

“Revenge and collective punishment shouldn’t be seen as any part of the strategy for defeating ISIS,” Stork said. “Iraq needs to ensure individual accountability for crimes, whether by Sunni extremists or Shia militiamen.”